NEW YORK -- China does not have the military capability or the intent to seize Taiwan by force in the immediate future, the top uniformed officer of the U.S. military told Congress Thursday.

"China has a ways to go to develop the actual no-kidding capability to conduct military operations to seize, through military means, the entire island of Taiwan, if they wanted to do that," Chairman of the Joint Chiefs of Staff Gen. Mark Milley told the Senate Appropriations Committee.

He was asked by Democratic Sen. Chris Coons from Delaware how likely it is that China actively pursues a unification strategy with Taiwan through force in the near future.

Milley's comments differed from the assessment given by the former commander of the U.S. Indo-Pacific Command Adm. Philip Davidson in March, when the latter warned lawmakers that such a threat could manifest in the next six years. 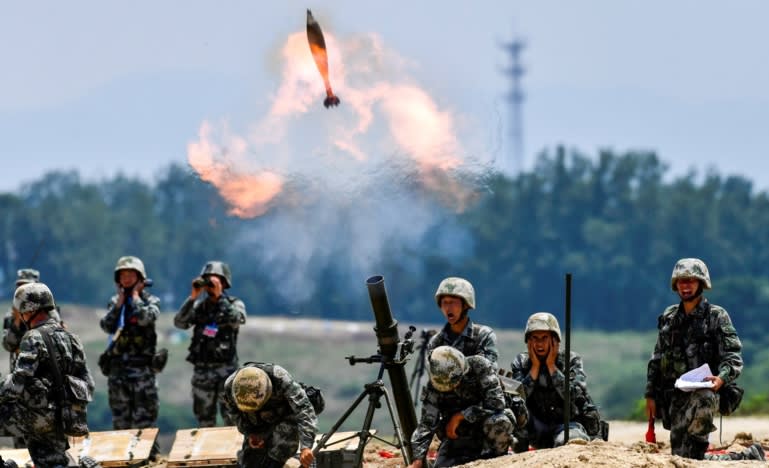 Chinese soldiers from the People's Liberation Army fire a mortar during an exercise in Anhui Province, China.   © Reuters

While acknowledging that uniting with Taiwan is a "core interest" for China, Milley signaled that he thought Beijing will pursue such ambitions through peaceful means.

"The internal politics of China are up to China, as long as whatever is done is done peacefully and doesn't destabilize the region nor the world," Milley said.

Milley appeared in front of the committee to discuss the Pentagon's Fiscal 2022 budget request, alongside Defense Secretary Lloyd Austin.

Austin gave a more blunt assessment, saying, "Uniting with Taiwan is, no question, the goal of China. In terms of ... what the timeline or time frame for that is, is left to be seen."

"Our position is that we remain committed to helping the defense of Taiwan in terms of providing the ability for them to defend themselves in accordance with the Taiwan Relations Act and the Three Communiques and the Six Assurances."

Rachel Esplin Odell, a research fellow in the East Asia Program at the Quincy Institute, said Milley's comments "basically reaffirmed the longstanding U.S. One China Policy, which includes the understanding that the United States supports any peaceful, uncoerced resolution of cross-Strait differences."

"However, a somewhat more accurate statement of longstanding policy would have been that cross-Strait differences are up to both China and Taiwan to resolve peacefully through mutual agreement," she said.

"Nonetheless, Gen.Milley's comments are, on the whole, a welcome corrective to dangerous rhetoric from some analysts and politicians in Washington that portrays Taiwan as a strategic asset for the United States that must be kept separate from China. It is encouraging that Gen. Milley recognizes that danger," she said. In a March hearing at the Senate Armed Services Committee, Adm. Davidson had been asked what the timeline of a potential conflict in the Taiwan Strait would be, considering Chinese President Xi Jinping's aggressive leadership style.

Davidson replied: "I think our concerns are manifest here during this decade, not only on the development, the number of ships, aircraft, rockets, etc. that they have ... put in the field, but the way they are advancing those capabilities."

"I worry that they are accelerating their ambitions ... to supplant the United States and our leadership role in a rules-based international order," he said, adding that Beijing has long said that they would want to assume such global leadership by 2050.

"I'm worried about ... moving that target closer. Taiwan is clearly one of their ambitions before that, and I think the threat is manifest during this decade, in fact, in the next six years." A U.S. soldier surveys from the back of a CH-47 Chinook during flight over Kabul, Afghanistan. (Photo courtesy of the U.S. Army)

At Thursday's hearing Austin and Milley were also asked about Afghanistan, and the threat militant groups could pose, once the U.S. leaves in September.

"How would you rate the likelihood of international terrorist organizations like Al-Qaeda and ISIS regenerating inside of Afghanistan and presenting a threat to our homeland, our allies given what you see today?" said Republican Sen. Lindsey Graham of South Carolina. "Is it small, medium, large?"

Austin replied: "I would assess it as medium," and that "it would take possibly two years for them to develop that capability."

Milley agreed with the assessment. "I concur with that and I think that if certain other things happen, if there was a collapse of the government or disillusion of the Afghan security force, that risk would obviously increase. But, right now, I'd say medium and in about two years or so."