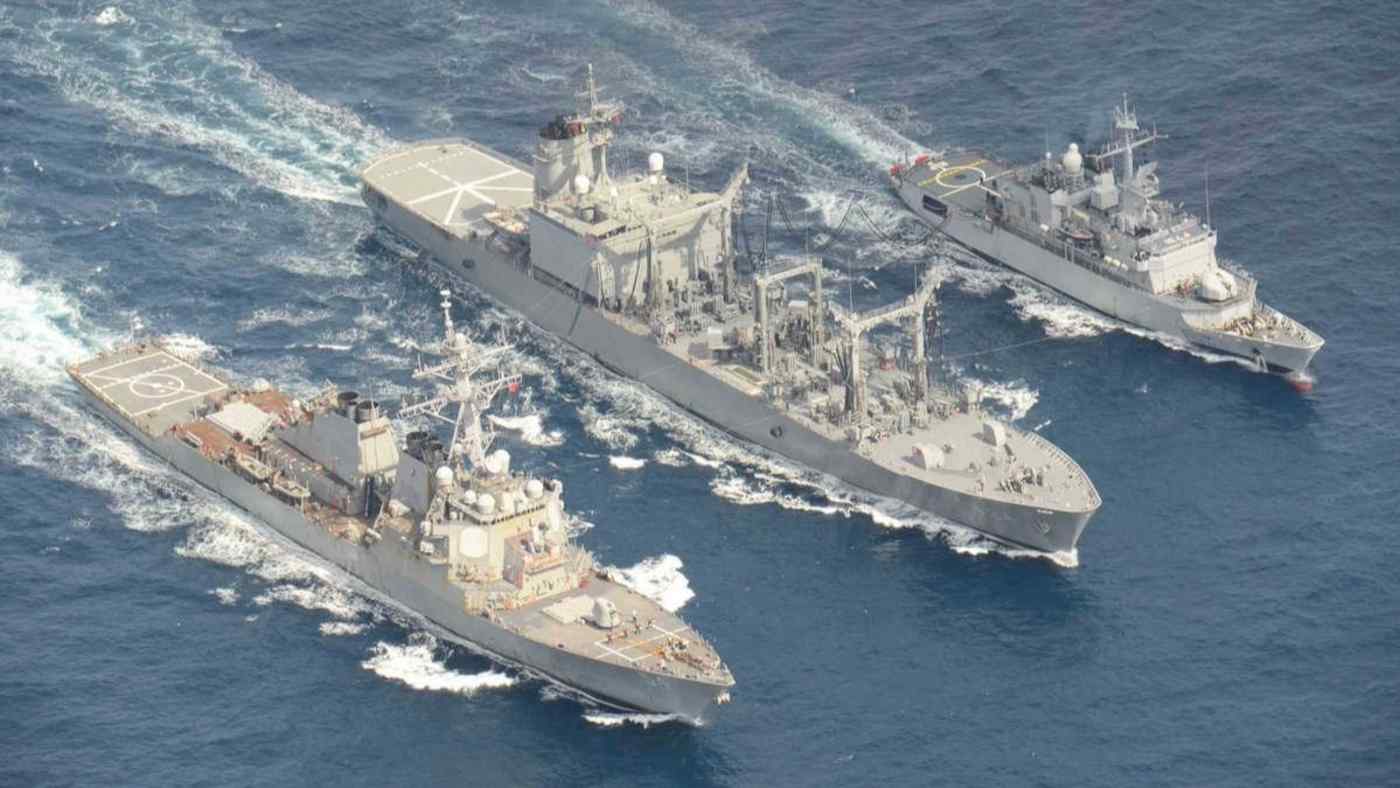 TOKYO -- Major European countries are sending warships to the Indo-Pacific region amid mounting suspicion toward China over its political crackdown in Hong Kong and handling of the coronavirus outbreak.

On Wednesday, the French Embassy in Tokyo posted an article describing the activities of a frigate in Asian waters.

"The frigate Prairial is currently deployed in Asia-Pacific where it is participating in the system to fight against the circumvention of United Nations Security Council sanctions by North Korea," the embassy said. "It is one element of our work for the benefit of security in the Indo-Pacific region."

In an earlier post, the embassy noted that the Prairial had made a technical stopover in the Japanese naval port of Sasebo, in Nagasaki Prefecture, and had stayed for four days.

It was reminiscent of a port call by the British flagship amphibious assault vessel HMS Albion in 2018 to Yokosuka, Japan, home to the U.S. 7th Fleet, where the ship underwent maintenance. The port calls signal to potential adversaries that the navies have friendly ports in the region that they can depend upon when needed.

A joint exercise last month involving France, the U.S. and Japan underscored the trend. The Japanese replenishment ship Hamana refueled the Prairial near Kyushu in southwestern Japan in the first operation of this kind since an acquisition and cross-servicing agreement between the two countries took effect in 2019.

In December, the French nuclear submarine Emeraude conducted anti-submarine exercises with the American guided-missile destroyer USS John McCain and Japanese helicopter carrier Hyuga in the Philippine Sea. This marked the first time that Japan's Maritime Self-Defense Force and the French Navy participated together in a submarine exercise.

"This trilateral exercise with the United States Navy and the French Navy not only develops tactical skills but also contributes to a 'free and open Indo-Pacific' based on the rule of law and freedom of navigation," said Capt. Shingo Hamasaki, commander of the MSDF's 3rd Escort Division.

With military bases in New Caledonia and French Polynesia, Paris considers itself an Indo-Pacific power. France also views China's rising influence in the region as a cause for concern.

On the return trip, it will become the first German warship to cross the South China Sea since 2002, Reuters reported the officials as explaining.

The ship will not pass within 12 nautical miles of contested islands in the sea, the officials in the foreign and defense ministries added.

Washington says no coherent legal basis exists for China's nine-dash line claim, and the U.S. Navy regularly conducts "freedom of navigation" operations in which American vessels pass close to some of these islands, asserting freedom of access to international waterways.

But the German announcement may have unintentionally exposed Berlin's inexperience in the South China Sea.

Collin Koh, a research fellow at the S. Rajaratnam School of International Studies in Singapore, noted in a tweet that it would have been better for the Germans not to have claimed they will stay out of the 12 nautical mile range.

"I understand many navies, regional and extra-regional, would strive to stay outside [12 nautical miles] from the contested feature because doing so could become unnecessarily provocative to the claimants. But some things are better not said openly lest they're taken as endorsement for claims," he wrote.

The moves by France and Germany follow the U.K., which increasingly looks to the Indo-Pacific in the post-Brexit era. In addition, relations between London and Beijing have soured over the enactment of new security legislation last year in Hong Kong -- a former British colony -- which the U.K. says undermines the territory's autonomy.

The Royal Navy aircraft carrier HMS Queen Elizabeth is set to deploy to the region after spring, accompanied by a strike group including submarines and destroyers, in a show of force aimed at China. The carrier is slated to participate in exercises with F-35B stealth fighters belonging to the U.S. and Japan.

Japan sees increased European engagement as a golden opportunity to further its vision of a free and open Indo-Pacific. Foreign Minister Toshimitsu Motegi welcomed Europe's increased interest in the region when he addressed the European Union's Foreign Affairs Council in late January and called for cooperation in areas including maritime security.

U.S. President Joe Biden and his administration are working to mend ties with Europe as part of an increased focus on international alliances. In a speech at last month's Munich Security Conference, Biden called the relationship a "strong foundation" for shared security and prosperity.