GPS, subs and microelectronics: Biden defense budget is all China NEW YORK -- America needs to be at least one technical generation ahead of any adversary when it comes to satellite-based navigation, U.S. President Joe Biden's first defense budget request notes, asking for $1.8 billion to bolster the Global Positioning System.

A portion of that funding will go toward hardening GPS signals against jamming so that fighters, ships and missiles can position, navigate and time their activities even when the enemy tries to disrupt them.

"Adversaries have long recognized our dependence on GPS and have proliferated technologies to degrade, deny, and spoof GPS signals for civil and military users," the Pentagon says in a budget overview released Friday. "We are pursuing modernization efforts across the entire GPS architecture to include upgrades in space, ground, and user segments."

The GPS funding reflects an underlying theme of the fiscal 2022 budget request. The adversary in mind is China, and the military has realigned its spending plans to meet the threat.

The nearly $753 billion national defense budget is a modest 1.6% increase over the fiscal 2021 figure and includes $5.1 billion for the Pacific Deterrence Initiative, aimed at countering the Chinese military buildup in the Indo-Pacific.

While allocating money to China-conscious programs, the Pentagon proposes $2.8 billion in divestments of "older and less-capable platforms" and programs that no longer meet mission and security needs. These include a night vision imaging system for the Army and littoral combat ships for the Navy. 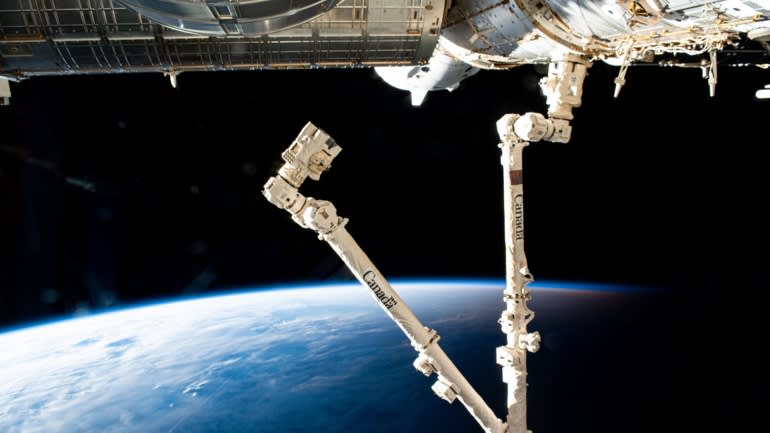 The Earth is seen from the International Space Station. The Pentagon sees space as a major warfighting domain in the future. (Photo courtesy of NASA)

The fiscal 2022 request includes the largest-ever $112 billion budget for research, development, test and evaluation, according to the overview.

Various microelectronics efforts would receive $2.3 billion, up from the year-earlier request of $1.5 billion for microelectronics and 5G. "This will provide the foundation for fielding a full range of needed capabilities, such as hypersonic missiles, artificial intelligence and 5G," Deputy Defense Secretary Kathleen Hicks told reporters.

The nature of the Chinese buildup has altered the U.S. Navy's plans in rapid ways as well. One trend is a shift to submarines -- an acknowledgement that surface ships are more vulnerable to China's increasing missile capabilities.

Previous plans under then-President Donald Trump had shipbuilding for 12 new vessels in fiscal 2022. This has now been cut down to eight: four warships and four support vessels.

In scaling that request back, plans for one missile destroyer are scrapped. Two Virginia-class fast-attack submarines are requested for a total of $6.9 billion, up from one in Trump's fiscal 2021 plans.

The two Virginia-class submarines requested will be longer versions of the existing vessel -- equipped with 28 additional tubes to launch Tomahawk land-attack cruise missiles.

These will substitute for the Navy's four Ohio-class cruise missile submarines (SSGNs) slated for decommissioning starting in 2027 at a rate of one per year. The retirement of these subs, each of which can carry up to 154 Tomahawk missiles, comes ahead of the debut of such China-conscious next-generation weapons as hypersonic missiles.

The gap in the timing had been seen as a potential vulnerability. "In my estimation the next five to eight years, the mid- to late 2020s, may be the period of greatest peril for a failure of deterrence in the region," Tom Shugart, an adjunct senior fellow at the Washington-based Center for a New American Security, told Nikkei Asia in April.

The budget request also includes $5 billion for the first Columbia-class ballistic missile submarine (SSBN), the sea-based leg of the nuclear triad, that will be delivered in fiscal 2028 and enter into service in October 2030.