A ceremony in the northern German port of Wilhelmshaven to mark the departure of the Bayern frigate on its maiden Indo-Pacific voyage on August 2. (Photo by Jens Kastner)
JENS KASTNER, Contributing writerAugust 18, 2021 15:22 JST | Europe
CopyCopied

WILHELMSHAVEN, Germany -- 15 days into the maiden Indo-Pacific voyage of the German navy's Bayern frigate, its captain is still awaiting for an answer from Beijing on whether the vessel will be allowed to make a port call in Shanghai.

The German navy's press kit handed out at the Bayern's departure from Wilhelmshaven in northwestern Germany on August 2 listed port calls in Djibouti, Karachi, Diego Garcia, Perth, Guam, Tokyo, Incheon, Shanghai, Ho Chi Minh City, Colombo and Mumbai. While it will traverse the South China Sea, the Bayern will not sail within 12 nautical miles of Chinese-claimed features in the water, nor pass through the Taiwan Strait.

The ship is due to dock in Karachi on Sept. 9, according to a Facebook post by the German embassy in Islamabad.

The mission is the German navy's first Indo-Pacific voyage in 20 years. The declared objective is to help Berlin's partners in the region amid a "restriction of maritime freedom and attempts to push through territorial claims through the might of the strongest."

The German navy told Nikkei Asia that a cancellation of the Shanghai port call would not be a problem in terms of logistics, and the route would be adjusted.

"As it is common for any training voyage, all countries along the route are contacted to talk about the possibilities for joint training, with the interactions then conducted under the framework of port calls," Captain Tilo Kalski said via email from the frigate in Mediterranean waters near Crete on Tuesday.

"Given that our planned route is along common maritime routes in free waters, I do not expect any aggressive harassment from the Chinese forces," he added.

Kalski pointed out that when sailing along Taiwan's east coast, the actual distance from the island will depend on the sea traffic situation and the weather conditions of the day. 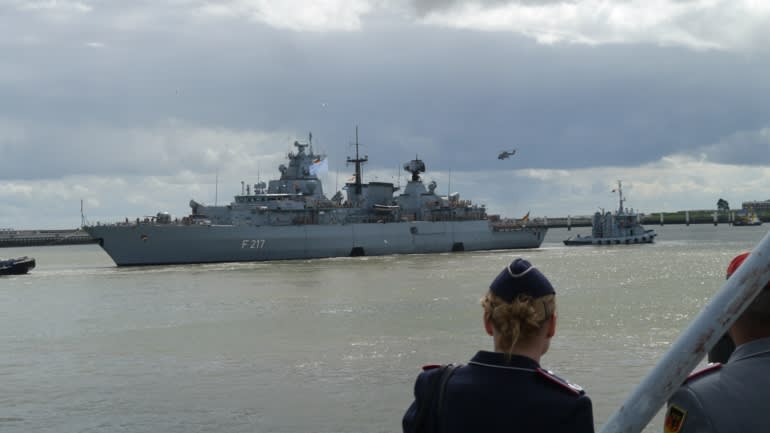 Germany's Bayern frigate sets sail on August 2 from the port of Wilhelmshaven. (Photo by Jens Kastner)

Reflecting an increase in attention on Beijing's growing military clout in areas claimed by China, Taiwan, Malaysia, the Philippines, and Vietnam, successive U.S. governments have been encouraging the navies of allied countries to join the freedom of navigation patrols operations (FONOPs).

While the German navy has yet to make to send a single vessel to the South China Sea, the navies of the U.K. and France have already been conducting maneuvers in the region with much larger presences.

The strike group of HMS Queen Elizabeth, the U.K.'s largest aircraft carrier, consists of vessels from the U.K., the U.S. and the Netherlands and is set to join the U.S., Japan, Australia, New Zealand and France in exercises close to the South China Sea.

A French nuclear-powered attack submarine passed through the South China Sea in February, and French fighter jets and transport aircraft are set to conduct drills this month over Southeast Asia.

Meanwhile, the U.S. Navy continues to patrol through the Taiwan Strait. The guided-missile destroyer USS Benfold on July 28 marked the seventh passage of a U.S. naval vessel through the highly sensitive waters since President Joe Biden took office in January.

While the Chinese Foreign Ministry has slammed the U.S. and the U.K. for their actions, Beijing said it will make a decision on the Shanghai port call only if the German side fully clarifies its intentions, according to the South China Morning Post.

"Even before the Bayern's voyage, I had not expected Germany to take a dive into doing FONOP like what the Americans have been doing, since it would like to maintain a certain stability in its ties with Beijing," said Collin Koh, a research fellow at the Institute of Defence and Strategic Studies in Singapore.

"Hence, the frigate's mission is nothing more than just a 'show of flag' to amplify Germany's interest in the region, and its quest to maintain rules-based order," he added.

Thorsten Benner, director of the Global Public Policy Institute in Berlin, said that a Chinese nod for the Shanghai port call will depend on Beijing's mood.

"If they want to punish Germany, they will reject the port call, but then Beijing should understand that it would strengthen those forces in German politics that prefer a more determined course versus China and have never been convinced that a Shanghai port call would be a helpful balancing act," Benner said.

Steve Tsang, the Director of the SOAS China Institute in London doubts that China will permit a port call by the German naval ship unless the ship sails a course pre-approved by Chinese authorities.

"The Chinese government under Xi is making it clear that China calls the shot, not Germany or any other European countries," Tsang said.