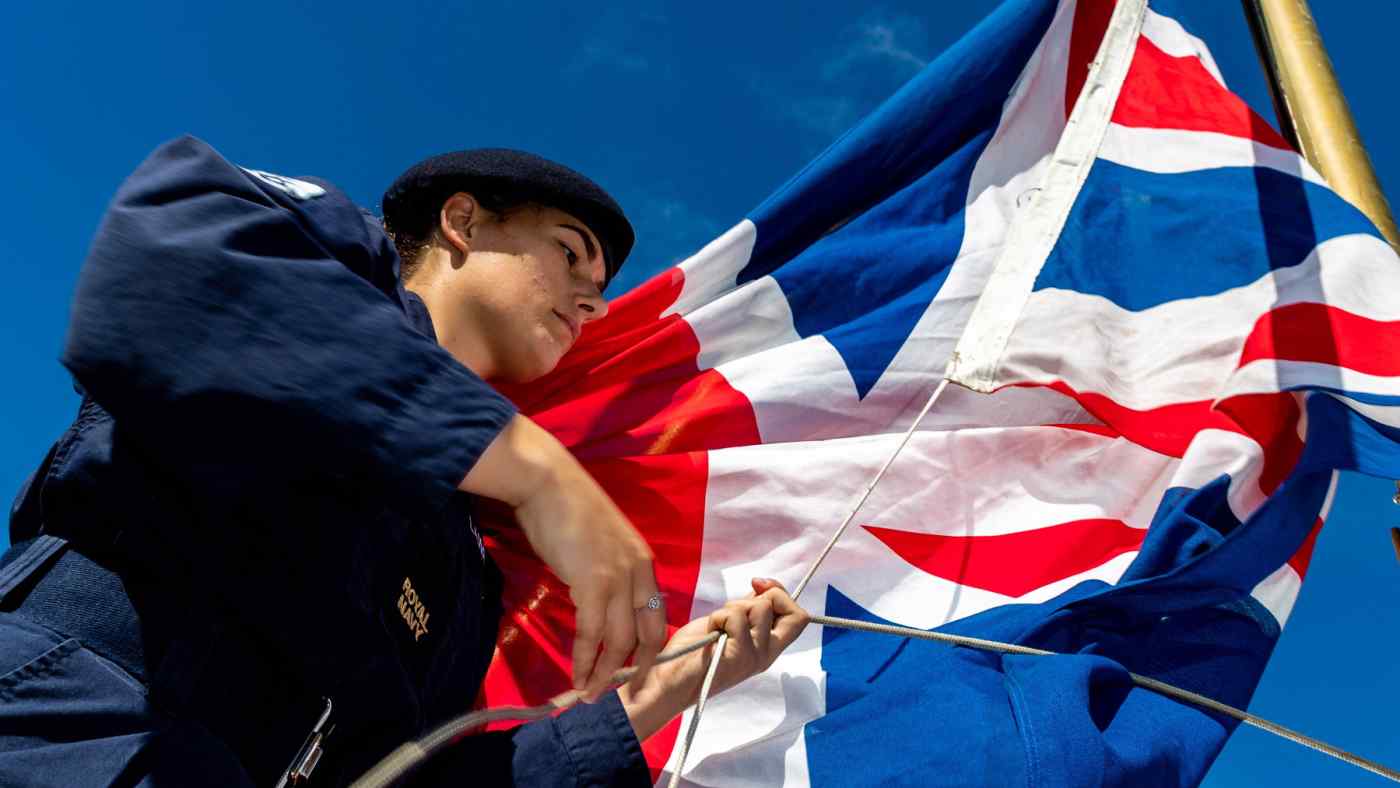 LONDON -- The U.K. has adopted a "tilt to the Indo-Pacific" and framed China as a "systemic challenge" in an integrated review of security, defense, development and foreign policy published Tuesday, billed as London's biggest rethink of these policy areas since the end of the Cold War.

The 100-page integrated review, titled "Global Britain in a Competitive Age," recognizes the Indo-Pacific as "the crucible for many of the most pressing global challenges" and notes "the U.K. will deepen our engagement in the Indo-Pacific, establishing a greater and more persistent presence than any other European country," in the decade ahead.

The government also said its nuclear weapons arsenal cap would increase to 260 warheads from the current 180, after working since 2010 to reduce the stockpile from 225.

"In recognition of the evolving security environment, including the developing range of technological and doctrinal threats, this is no longer possible," the review said.

On China, the strategy pledges to "adapt to China's growing impact on many aspects of our lives as it becomes more powerful in the world."

"We will invest in enhanced China-facing capabilities, through which we will develop a better understanding of China and its people, while improving our ability to respond to the systemic challenge that it poses to our security, prosperity and values -- and those of our allies and partners," the review said. But the review also acknowledges the importance of working with Beijing on global challenges like climate change and the benefits of economic relations. It advocates for continued trade and investment with China, though with caution to protect British security and values. A bill that aims to screen investment into infrastructure that could pose a national security risk was introduced in November, and is being debated in the House of Lords.

Prime Minister Boris Johnson told Parliament in a statement Tuesday that the U.K. could never turn inwards or be content with the "cramped horizons" of a regional foreign policy. "For us, there are no faraway countries, of which we know little. Global Britain is not a reflection of old obligations, still less of a glorious gesture, but a necessity for the safety and prosperity of the British people in the decades ahead."

As part of Britain's increasing political and economic engagement with the Indo-Pacific, Johnson will visit India at the end of April. The U.K., as host of this year's Group of Seven summit in June, also has invited India, Australia and South Korea as guest countries in a move it says will "intensify cooperation between the world's democratic and technologically advanced nations."

The U.K. is applying to regain dialogue partnership status with the Association of Southeast Asian Nations, having lost this standing when it left the European Union. Britain also is applying to join the Comprehensive and Progressive Agreement for Trans-Pacific Partnership, an 11-member trade bloc that includes Japan, Canada and Malaysia.

"Our future prosperity will be enhanced by deepening our economic connections with dynamic parts of the world such as the Indo-Pacific, Africa and the Gulf, as well as trade with Europe," the paper said.

"We will pursue deeper engagement in the Indo-Pacific in support of shared prosperity and regional stability, with stronger diplomatic and trading ties," the review said. "This approach recognizes the importance of powers in the region such as China, India and Japan and also extends to others including South Korea, Vietnam, Indonesia, Malaysia, Thailand, Singapore and the Philippines. We will seek closer relations through existing institutions such as ASEAN and seek accession to the CPTPP."

The review did not provide further details of the deployment of aircraft carrier HMS Queen Elizabeth with NATO allies later this year to the Mediterranean, Middle East and Indo-Pacific, though the document said it will demonstrate the U.K.'s interoperability with the U.S.

The move to increase its nuclear arsenal attracted criticism from Nobel Peace Prize laureate the International Campaign to Abolish Nuclear Weapons. Executive Director Beatrice Fihn said, "A decision by the United Kingdom to increase its stockpile of weapons of mass destruction in the middle of a pandemic is irresponsible, dangerous and violates international law."

"While the majority of the world’s nations are leading the way to a safer future without nuclear weapons by joining the treaty on the prohibition of nuclear weapons, the United Kingdom is pushing for a dangerous new nuclear arms race." 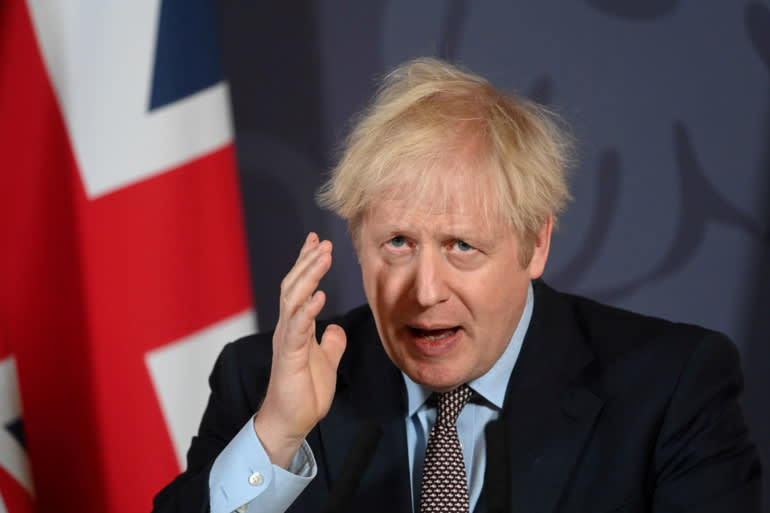 U.K. Prime Minister Boris Johnson told parliament on Tuesday that the U.K. could never turn inwards or be content with the "cramped horizons" of a regional foreign policy.   © Reuters

Since the British public voted to leave the EU in a national referendum in 2016, the phrase "Global Britain" has been used by the government as a promise that the U.K. will engage more with the world post-Brexit. But experts have noted that the concept lacked a clear definition or explanation of how it will be implemented in concrete policy terms.

The integrated review seeks to answer those questions. It comes at an important juncture for British diplomacy, as the U.K. hosts the G-7 summit in June followed by the United Nations Climate Change Conference (COP26) in November.

Veerle Nouwens, research fellow at the Royal United Services Institute, said the statement that the U.K. intends to be Europe's leading partner in the Indo-Pacific was notable. "To me that does send a signal that the U.K. is trying to make clear that it does want to be a leading European partner in the Indo Pacific in the next decade. This also sends a signal to countries in the region of a long-term commitment and ambition in the Indo-Pacific in terms of the U.K.'s application for ASEAN dialogue partnership status and acceding to the CPTPP."

Yet, she questioned to what extent the UK can be involved in the region. In the short- to medium- term, the U.K. will likely have to be realistic, she said. "A lot of transits and working with partners is to be expected. But at the same time whilst that ambition is there long term to be more present militarily, I'm not sure we see the resource capability yet, given the pressures closer to home."

The review took place amid increasing skepticism toward China within Britain's ruling Conservative Party over the past year. Beijing's national security law imposed on Hong Kong and human rights abuses in Xinjiang, alongside simmering distrust over China's handling of the initial phase of the coronavirus pandemic, have ended the "Golden Era" of U.K.-China relations touted only a few years ago.

For context, the 2021 Military Balance assessment published by the International Institute for Strategic Studies in late February ranks the U.S. as having the world's largest defense budget in 2020, at $738 billion, with China second at $193.3 billion. India was third with a budget of $64.1 billion, while the U.K. stood fourth at $61.5 billion, including the armed forces pension scheme.

On March 22, the Defense Command Paper will follow on by detailing a plan for the armed forces, according to the new strategy.