Indo-Pacific: The front line of US and China next-gen submarines

Ballistic missile 'boomers' are undetectable, but drones and geography hinder use NEW YORK -- Life on a nuclear-powered ballistic missile submarine, or SSBN, can be dreary.

"There's no Wi-Fi, no TV, no radio or anything like that. When I first joined, everybody got very excited when the Navy's movie service sent you a new box of videotapes or DVDs," former submariner Tom Shugart, who served on three vessels, including as commander of the nuclear-powered fast-attack sub USS Olympia, told Nikkei Asia.

But besides the inherent challenges from the isolation of conducting missions underwater, there is another aspect to many submarine operations: secrecy.

Unlike a fast-attack submarine carrying conventional weapons, the U.S. Navy's Ohio-class SSBNs cannot make foreign port calls easily due to the 20 Trident D-5 ballistic missiles they carry. "Boomers," as SSBNs are called in the Navy, have one mission: to hide in the world's deepest oceans waiting for an order to launch a nuclear strike.

For the six decades since the world's first operational SSBN took to the high sea, that order has never come.

Meanwhile the world's major powers are quietly building their undersea deterrence capabilities. In the Indo-Pacific, the U.S., China, Russia and India operate SSBNs, while Pakistan and North Korea also are exploring submarine-launched nuclear firepower, albeit on diesel-electric subs. 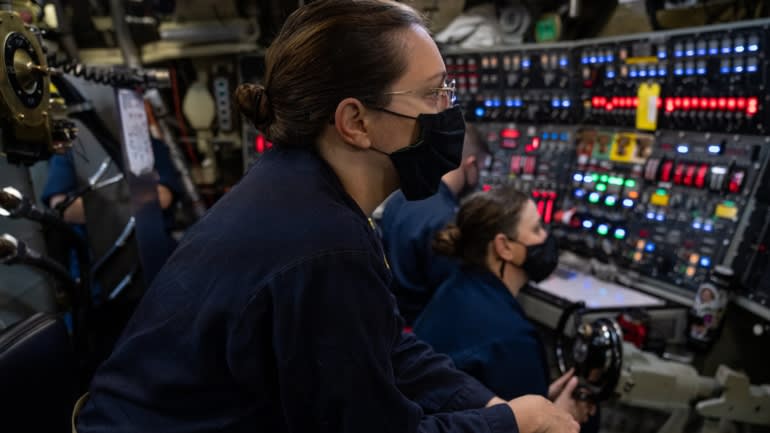 Chief Information Systems Technician Jessica Cooper, assigned to the Gold crew of the Ohio-class guided-missile submarine USS Ohio (SSGN 726), watches over the control room in the Pacific Ocean. The Ohio is one of the four SSBNs that were later converted to cruise-missile submarines. (Photo courtesy of the U.S. Navy)

The Pentagon, in its recently released 2022 budget request, allocated $5 billion for procurement of the Columbia-class SSBN, which is to replace the Ohio class in 2031. Many in the defense community criticized the overall budget request as not growing enough to meet the great power competition with China, but the Columbia program stood out as one of the few items that went unscathed.

American naval officials have stated for the past several years that the Columbia-class sub is the Navy's top priority program.

"This means, among other things, that from the Navy's perspective, the Columbia-class program will be funded, even if that comes at the expense of funding for other Navy programs," a Congressional Research Service report on the Columbia program noted, adding the italics for emphasis.

The aging 14 Ohio-class SSBNs are to be replaced with 12 Columbia-class vessels. Unlike the Ohio class, which all need to undergo a lengthy midlife upgrade for nuclear refueling -- like getting a fresh tank of gas -- the Columbia class is designed to have one reactor core for its entire life and never needs to be refueled. That configuration lets the Navy operate 10 SSBNs at all times, meeting the requirement from the combatant commander of U.S. Strategic Command, the section of the U.S. military in charge of nuclear weapons.

But keeping 10 nuclear subs at sea is expensive and cost estimates keep growing. The procurement cost for the 12-boat program totals $109 billion, as of the May 12 CRS report. On Monday, USNI News reported that the estimated price of the lead boat of the Columbia class grew by $637 million over the last year to $15.03 billion.

"Nuclear deterrence is what underpins the rest of the conventional deterrence," said Shugart, now an adjunct senior fellow at the Center for a New American Security. "If you don't have a reliable, survivable nuclear deterrent, then all the rest of what you're doing may not matter. That makes the program the No. 1 priority."

The three components of American nuclear strategy are the land-based intercontinental ballistic missiles, the air-based strategic bombers and the submarine-launched ballistic missiles. Of the three, the sea-based SSBN is considered the most survivable because the vessels are virtually undetectable once in a deep ocean. 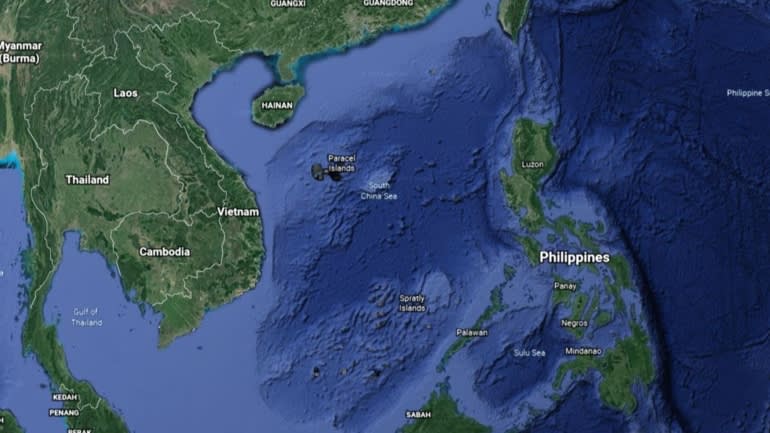 If China's submarine-launched ballistic missiles are able to fly longer distances, the South China Sea could become a bastion from where Chinese SSBNs target the U.S., analysts say. (Google Earth)

Other Sharks in the Sea

But the U.S. is not the only power honing its undersea deterrence.

In a February 2020 study by the National Security College at the Australian National University titled, "The Future of the Undersea Deterrent: A Global Survey," scholars from around the world analyzed the SSBN plans of China, Russia, India, France and the U.K., as well as the diesel-electric ambitions of Pakistan and North Korea.

Rory Medcalf, head of the National Security College, wrote that one credible explanation for Beijing's campaign of building and militarizing islands in the South China Sea is its wish to make that area a bastion where the country's SSBN fleet can operate in relative safety from detection or attack by U.S. and allied forces.

China is thought to possess six Jin-class SSBNs (Type 094), of which the latest, the Long March 18, was delivered in April. The submarine carries 12 JL-2 ballistic missiles with an estimated range of 7,200 km. That range could let Jin-class subs attack targets in Alaska from protected bastions near China, targets in Hawaii from locations south of Japan and even targets in the western U.S. mainland from mid-ocean locations west of Hawaii, the CRS estimates.

But to hit Washington, Chinese submarines would have to travel east of Hawaii, navigating hostile waters.

China's biggest obstacle to SSBN operations is its geography, surrounded by shallow waters and having to pass choke points before entering the deep waters of the Pacific.

"Whereas the SSBNs of the United States, France, Britain, India and Pakistan have direct access to the world's ocean basins, those of China do not," Stephan Fruehling, associate dean of the ANU College of Asia and the Pacific, wrote in the university's report.

Shugart agrees. "China's military advancement has eroded the U.S. advantage in so many areas. But one area that the U.S. still has a significant advantage is in undersea warfare," the ex-submariner said.

Yet if future Chinese missiles have a longer range, then Beijing potentially could keep its SSBNs in the South China Sea and still target the U.S. The distance from its fortified base at Hainan to San Francisco is around 11,600 km, while it would be 13,500 km to Washington.

"Over a time span of several decades, it seems likely that the Chinese could produce a sea-based missile with sufficient range to reach anywhere in the United States from the South China Sea," American naval analyst Norman Friedman wrote in the report. An Indian submarine is seen at sea. The country is the first country outside the five permanent members of the United Nations Security Council to operate a SSBN. (Photo courtesy of the Indian Navy)

New Delhi commissioned its maiden SSBN, the INS Arihant, in 2016, making India the first country outside the five permanent members of the United Nations Security Council to build such a vessel. Its second SSBN, an upgraded INS Arighat, is to be commissioned later this year.

The older Arihant carries 12 short-range K-15 ballistic missiles with a range of 700 to 1,000 km, but could be modified to launch four K-4 ballistic missiles that can travel 3,000 to 3,500 km. Either way, the Arihant's current area of operations appears limited to the Bay of Bengal, from where it could target Pakistan or China if ordered.

But down the road, "Like the United States, India has geographic advantages for SSBNs to go on open ocean patrol, once they field long-range" submarine-launched ballistic missiles, retired Rear Adm. Sudarshan Shrikhande, the former head of Indian Naval Intelligence, wrote in the same report.

"We need to move beyond bastions where an enemy's offensive [anti-submarine warfare] is effective," he added.

"Most defense analysts claim that Pakistan will likely use the three Agosta-90B diesel-electric submarines purchased from France in 1999, 2003 and 2006," she wrote.

The breakthrough for Pakistan will likely come through the assistance of China. China has agreed to provide eight modified Type 093 and Type 041 Yuan-class diesel-electric submarines to Pakistan, with the first batch comprising four submarines arriving in 2023 and the last four to be assembled in Karachi by 2028.

"The addition of these Chinese submarines will tremendously boost Pakistan's ability to defend its coastal areas as well as sea lines of communication," Tasleem wrote in the report. All Drones on Deck

For years, SSBNs have engaged in games of hide-and-seek with the latest anti-submarine warfare capabilities. Much has been made of technological advancements that could make oceans more transparent, thus eroding the survivability of SSBNs. These include swarms of underwater drones capable of big data analysis and new sensing technologies.

"CubeSats now provide high-resolution imagery on a daily basis of the entire planet -- this type of imagery, combined with appropriate search algorithms, might reveal SSBN operational signatures that have so far remained unobserved," wrote James Wirtz, dean of the School of International Graduate Studies at the Naval Postgraduate School in California.

"That would pose a currently unimaginable command, control and communications challenge for these UUVs," he wrote.

But till the robots take over, SSBNs likely will continue to prowl the world's cold ocean depths undetected.