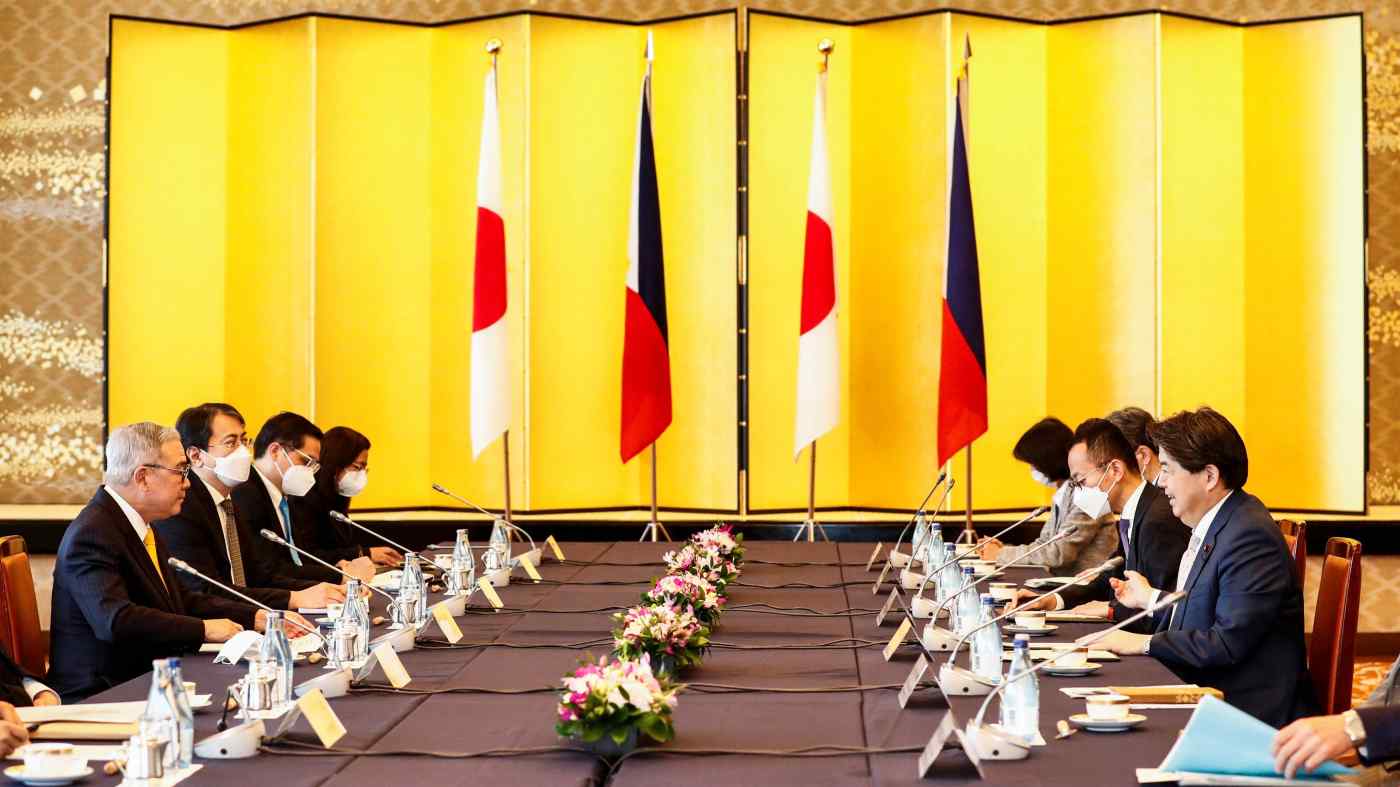 TOKYO (Kyodo) -- Japan and the Philippines on Saturday agreed to work toward signing a treaty designed to facilitate joint exercises and reciprocal visits of their forces as China's increasingly assertive pursuit of sovereignty claims in regional waters has upset its neighbors.

The deal was struck during a meeting in Tokyo of their foreign and defense ministers, in which they expressed "serious concern" about the situation in the East and South China Seas and "strongly opposed" any action that may inflame tensions, according to their joint statement.

They also agreed that Russia's invasion of Ukraine has threatened the very foundation of rules-based international order and that the ramifications of the war go far beyond Europe.

A new treaty sought by Japan and the Philippines, which have been struggling to deal with China's pressing of maritime sovereignty claims, is formally called the Reciprocal Access Agreement.

Such a pact, which Japan most recently signed with Australia, will help ease restrictions on the transportation of weapons and supplies for joint training and disaster relief operations.

Hayashi, Defense Minister Nobuo Kishi, and their respective Philippine counterparts Teodoro Locsin and Delfin Lorenzana also confirmed to consider signing a supply-sharing pact for their forces, known as ACSA, which stands for an acquisition and cross-servicing agreement, officials said.

As China's clout looms large, the ministers vowed to realize a "free and open" Indo-Pacific and objected to "unlawful maritime claims, militarization, coercive activities and the threat or use of force in the South China Sea."

The statement stopped short of directly referencing China, but Hayashi said at the outset of the talks that "China's unilateral attempts to change the status quo on the back of its force are continuing in the East and South China seas."

China has routinely sent ships to the East China Sea to navigate waters near the Japan-administered Senkaku Islands, which Beijing claims and calls Diaoyu. It is also involved in a territorial dispute with the Philippines and other Southeast Asian countries over the South China Sea.

When Locsin met the press with the three other ministers, he said the launch of the two-plus-two dialogue is a "manifestation of our desire to jointly address common concern on defense and foreign affairs."

The ministers also said they are strongly against "economic coercion to achieve political ends" and stressed "the importance of an international law-based economic order."

The dialogue came as Russia's invasion of Ukraine fuels fears China could be emboldened to further intensify its military activities in the Indo-Pacific region, while North Korea's intercontinental ballistic missile launch last month has renewed focus on its arms threat.

On Russia's invasion, the Japanese and Philippine ministers agreed that it "constitutes a serious violation of international law," and they "deplored the dire humanitarian consequences of the hostilities, especially in Bucha," a Ukrainian town near Kyiv.

Although the name of Russia did not appear on the statement, it said, "This aggression jeopardizes the foundation of the international order which does not accept any unilateral change of the internationally recognized borders through the use of force, thus affecting not only Europe but also Asia."

The security talks were arranged before Duterte's single six-year term, during which he has pursued rapprochement with China, ends in late June. The Philippines is the second Southeast Asian nation to have a two-plus-two meeting with Japan, following Indonesia.