Japan offers vaccines to Taiwan-friendly islands in the Pacific The U.S. is expanding a port in Vanuatu, part of a Pacific island chain that is strategically important to both Washington and Beijing.   © Getty Images
MIKI OKUYAMA, Nikkei staff writerJuly 3, 2021 02:46 JST | Japan
CopyCopied

TOKYO -- Japan urged leaders from Pacific island nations to unite against authoritarianism in a summit Friday, promising coronavirus vaccine doses and economic assistance to a region increasingly critical to joint efforts with the U.S. to counter Chinese expansionism.

As Beijing pressures island nations to sever diplomatic ties with Taiwan, Japan and the U.S. are stepping up efforts to keep them on their side in a tug of war against an authoritarian China.

Japanese Deputy Chief Cabinet Secretary Manabu Sakai told reporters after the summit that China or Taiwan "were not discussed at all." But Beijing's growing clout in the region, driven by its financial might, loomed large over the proceedings.

"The PALM leaders emphasized their renewed and strengthened commitment to the importance of free, open and sustainable maritime order based on the rule of law," according to a joint statement from the summit. 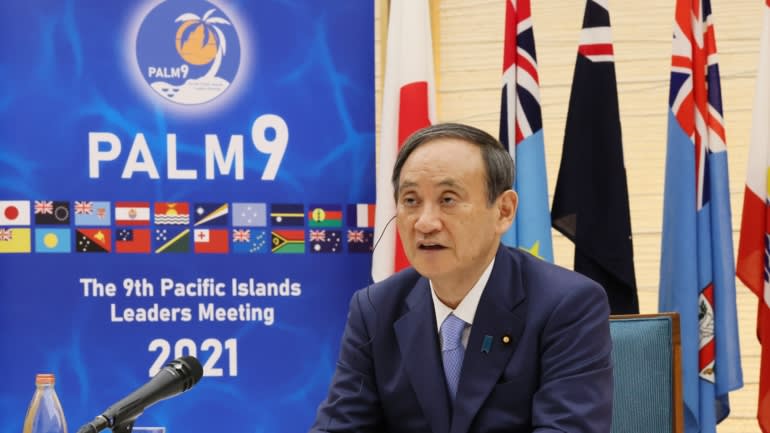 Japanese Prime Minister Yoshihide Suga speaks to leaders from 18 Pacific countries and regions, including Tuvalu, Palau and the Marshall Islands, on July 2. (Photo courtesy of the Prime Minister's Office of Japan)

The document reiterated "the importance of all states respecting international law," including on freedom of navigation and overflight through or over the high seas and exclusive economic zones, in a veiled criticism of China.

Suga called for deeper ties between Pacific island countries in a "free and open Indo-Pacific." Tuvalu Prime Minister Kausea Natano said the leaders discussed how to better fulfill their duty as the keepers of the Pacific.

Japan promised to assist the island countries in COVID-19 and infrastructure development, including by providing approximately 3 million vaccine doses. Shipments are set to begin this month.

China has ramped up pressure on Pacific island nations in recent years in its push to isolate Taiwan. Kiribati and the Solomon Islands cut diplomatic ties with Taipei in favor of Beijing in 2019.

Of the 16 countries besides Japan at the PALM summit, just four -- Tuvalu, the Marshall Islands, Palau and Nauru -- still maintain diplomatic ties with Taiwan.

China is only expected to toughen its stance on Taiwan. "Resolving the Taiwan question and realizing China's complete reunification is a historic mission and an unshakable commitment of the Communist Party of China," President Xi Jinping said in a Thursday speech for the party's 100th anniversary.

Japan looks to curb China's push toward unification in cooperation with partners like the U.S. and Europe. It called for peace and stability in the Taiwan Strait in a joint leaders statement with the U.S. in April, and with the Group of Seven in June.

The Pacific islands hold significant strategic importance for both China and the U.S. Beijing views the so-called second island chain, which extends from Japan's southern Ogasawara Islands to Guam and Saipan, as a key line of defense against the U.S. It is expanding a port in Vanuatu and plans to provide financial assistance to update an old airstrip in Kiribati, sparking speculation that the facilities could eventually be used for military purposes.

The Chinese military possesses ground, sea and air capabilities to rival the U.S. in the second island chain, an advisory body warned Congress in 2018. The chain is also close to the American military bases in Guam, and an increased Chinese presence there would impact U.S. capabilities in the region.

Beyond Guam, the U.S. operates a missile test site in the Marshall Islands but does not regularly station large numbers of troops there. Last August, then-Defense Secretary Mike Esper visited Palau and proposed building American military bases there.

Meanwhile, Pacific island nations have struggled to navigate competing U.S., Chinese and Japanese interests in the region. For example, when Kiribati recognized Taiwan in 2003, China responded by cutting ties with the Pacific country. Kiribati reversed its stance on Taiwan and reestablished relations with Beijing in 2019 to preserve economic ties to the Asian superpower.

"Pacific island nations tend not to have a strong political ideology, so they can be swayed by attractive offers of aid," said Izumi Kobayashi, professor at Osaka Gakuin University and president of the Japan Pacific Islands Association. "They need assistance that keeps them close."