NEW YORK -- Submarines are almost impossible to detect on the open sea unless they are monitored from the time they leave harbor. For militaries tracking Chinese submarines, one important opportunity to track the secretive vessels is when they pass through the Malacca Strait, moving from the South China Sea into the Indian Ocean.

The shallow waters and crowded sea lane force submarines to surface while passing through the world's most critical chokepoint.

As vessels exit the Malacca Strait, they come across the Andaman and Nicobar Islands, a territory of India consisting of 524 islands, of which 38 are inhabited.

And these strategically situated islands have recently received their first development assistance from the Japanese government.

The island currently relies on diesel-generated power, which is expensive to run and emits greenhouse gases. With the new battery in place, the plant will be able to generate 30 megawatts of electricity by 2026 and reduce 2,683 tons of carbon dioxide a year, according to an announcement. A nuclear-powered Type 094A Jin-class ballistic missile submarine of the Chinese People's Liberation Army (PLA) Navy is seen during a military display in the South China Sea in April 2018.    © Reuters

While Japan has offered emergency assistance to the islands before -- after the 2004 Indian Ocean earthquake and tsunami -- "this is the first-ever project-type grant offered by the Japanese government," an official at the Japanese Embassy in India told Nikkei Asia.

"It contributes to our shared vision for a free and open Indo-Pacific, and also contributes to Prime Minister Yoshihide Suga's goal of offering climate change assistance," the official said.

Staff from the government's aid arm, the Japan International Cooperation Agency, have visited the island multiple times in preparation for the grant, the official said.

While the $36 million grant is not large, analysts Nikkei reached were in unison on the significance and the symbolism.

"The real advantage the Andamans provide to India is the ability to conduct surveillance over critical waters," said Darshana Baruah, an associate fellow with the South Asia Program at the Carnegie Endowment for International Peace. "The islands offer unparalleled advantage in surveillance and monitoring the Malacca Strait. It is also close to the Straits of Indonesia, the alternate route into the Indian Ocean, especially for submarines," she said.

"A coherent monitoring and response mechanism will help India detect Chinese vessels upon their entry into the Indian Ocean."

But to maximize their potential, and to host more personnel on the islands, they will need to develop infrastructure, including water, electricity, housing and internet access. "The Japanese grant addresses a key requirement on the ground that will help India better utilize the strategic potential of the Andaman and Nicobar," Baruah said.

Baruah, who is currently in Tokyo as a visiting fellow at the Sasakawa Peace Foundation, added: "With Japanese constitutional limitations, this is one of the best ways Tokyo can support its Indian Ocean partner in addressing new challenges and threats in the Indian Ocean."

Tanvi Madan, a senior fellow and director of The India Project at the Brookings Institution, noted that while the power grid funded by the grant contributes to civilian infrastructure, "it serves a dual purpose."

Madan said that the grant comes at a time when India is "stitching in Andaman and Nicobar into its strategic tapestry in a much more significant way," and reflects a change in attitude on both the Indian and Japanese sides. 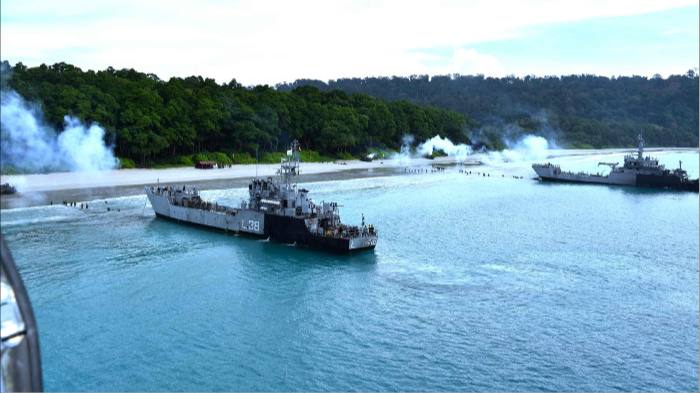 Indian naval ships participate in a Defense of Andaman and Nicobar Islands Exercise (DANX). (Photo courtesy of the Indian Navy)

India was the first country Japan extended official development assistance to in 1958. But India has always been reluctant to bring external actors into the Indian Ocean. Japan, for its part, has been hesitant to be too active in India's strategic periphery, to avoid being unnecessarily provocative to China, Madan said.

But in addition to the Andaman grant, Japan has been conducting road-connectivity projects in Northeast India, in states such as Meghalaya, Mizoram, Assam and Tripura that border Bangladesh and Myanmar.

"The fact that Japan has now gone over that red line -- or more like an orange line -- in the northeast and Andaman and Nicobar, is significant to both India, and in the broader developments in the Indo-Pacific," she said.

On India's side, two things are clear, Madan said. One, there is recognition that China, including through its navy, will be increasingly active in the Indian Ocean region. Second, because India cannot tackle that growing presence on its own, "you have now seen a broader switch in Indian strategy that has involved both developing its own capabilities and welcoming other external actors."

One example of the latter was when the U.S Navy long-range anti-submarine warfare and maritime surveillance aircraft P-8 Poseidon refueled at an Indian base in the Andaman and Nicobar Islands for the first time in September last year.

"After much hesitations, India appears willing to both leveraging Andaman's critical geography as well as working with key partners," Carnegie's Baruah said.

Titli Basu, an associate fellow at India's Institute for Defense Studies and Analyses, said: "Japan is an indispensable actor in India's economic modernization. The ODA footprint is not just expanding in India's key connectivity and infrastructure projects -- be it mega-industrial corridors or high-speed railway -- but Tokyo is also the most trusted partner in the development of strategic peripheries of India, like the Northeastern states and Andaman and Nicobar Islands."

"The objective is to connect the economic growth poles and advance linkages on one hand and build strategic leverage in the great power game on the other," she said.

The strategic islands look to play an important role in that great power game.

China has been boosting its presence in the Indian Ocean, opening its first overseas military base in Djibouti and building a series of commercial ports in Myanmar, Pakistan, Sri Lanka, and the Maldives that could eventually serve a military purpose.