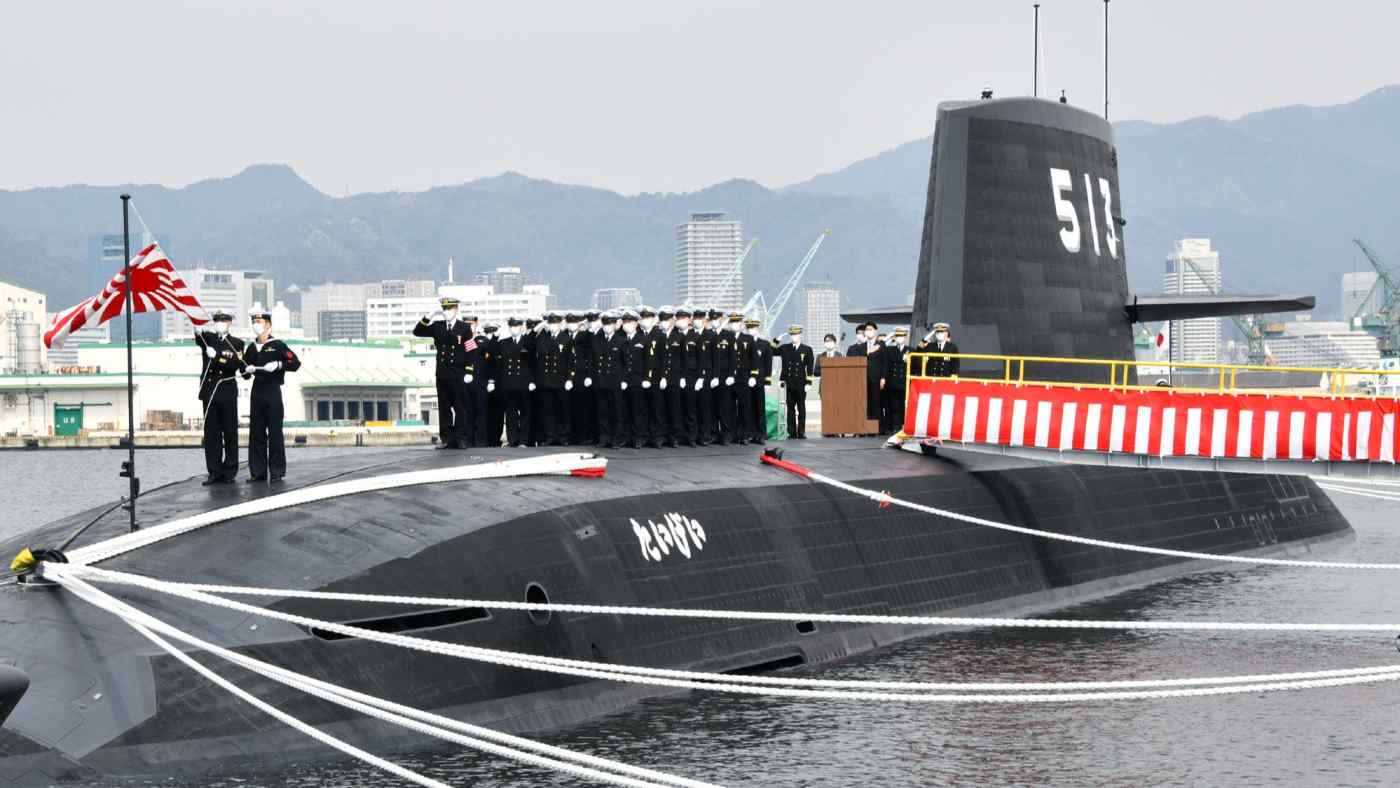 Japan's latest diesel-electric submarine Taigei is seen at a shipyard in Kobe in March. Opposition parties have called for an upgrade to nuclear-powered submarines.   © JMSDF
June 19, 2022 16:15 JST | Japan
CopyCopied

TOKYO (Kyodo) -- Japanese Prime Minister Fumio Kishida on Sunday took a cautious view about acquiring a nuclear-powered submarine to boost the country's defense capability, a call made by some opposition parties ahead of next month's upper house election.

"I'm not so sure if making the leap to a nuclear submarine is a good idea," Kishida said in an appearance on a Fuji TV program with other party leaders. He cited the difficulty of using nuclear power for military purposes under Japan's atomic energy law and the high running cost.

But Kishida, who heads the ruling Liberal Democratic Party, stressed the need to reinforce Japan's defenses at a time when Russia's invasion of Ukraine and Chinese military assertiveness have highlighted Japan's security challenges.

"We will see what needs to be prioritized to safeguard the people's lives and their livelihoods," he said.

Ichiro Matsui, leader of the Japan Innovation Party, and Yuichiro Tamaki, head of the Democratic Party for the People, called for acquisition of a nuclear-powered submarine to boost deterrence and reconnaissance capacity.

Japan "should have an advanced type (of submarine) to increase deterrence," Matsui said, while Tamaki stressed the advantage of a nuclear submarine's ability to stay underwater for months for enhanced surveillance and reconnaissance operations.

Japan is committed to an exclusively defense-oriented policy under the pacifist Constitution, and its defense spending has been limited to around 1 percent of gross domestic product.

The main opposition Constitutional Democratic Party of Japan's leader Kenta Izumi was against acquiring a nuclear-powered submarine, saying the country's defenses "won't get stronger simply because some deluxe equipment is added."

Among other issues, Kishida reiterated his pledge to implement measures aimed at mitigating the impact of high energy and food prices resulting partly from the yen's weakness, which has raised the cost of imported products.

Kazuo Shii, head of the Japanese Communist Party, urged the government to halve the consumption tax rate to 5 percent and take measures to raise wages.

In a separate debate by the major parties' policy chiefs on the public broadcaster NHK, the CDPJ and the Japan Innovation Party called for a consumption tax cut to spur the economy.

But Sanae Takaichi, chair of the LDP's policy research council, said the current level of the consumption tax is needed to finance the national pension and medical systems.

In the July 10 election for the House of Councillors, in which the coalition currently has a majority, 150 of 248 seats will be contested. Official campaigning will kick off on Wednesday.