Quasi-allies seek to augment US relationship, but also hedge against abandonment NEW YORK -- When Prime Minister Yoshihide Suga sat down on Sunday for breakfast with his Australian counterpart Scott Morrison, whom he calls "ScoMo," the usually stiff Japanese leader let out a smile that by all accounts looked genuine.

Against the backdrop of waves softly lapping the Cornwall shore, the two leaders spent an hour talking about all things Indo-Pacific, including a 20-minute one-on-one session with just interpreters to close off the morning meeting.

For Morrison, the congenial Sunday breakfast stood in contrast to a much-discussed trilateral meeting he had the day before with U.S. President Joe Biden and British Prime Minister Boris Johnson. The Australian side was reportedly denied a bilateral with Biden and had to settle for a three-way meeting with the Group of Seven host Johnson.

Australian opposition foreign affairs spokeswoman Penny Wong called the snub "disappointing," and suggested that Morrison's "stubborn refusal" to unequivocally commit to net-zero emissions by 2050 had fueled the White House decision not to grant a one-on-one.

Taken together, the two meetings symbolize the delicate balancing act America's "middle-power" allies must bear in mind, as great-power competition sweeps the Indo-Pacific. Both Australia and Japan have clearly shifted away from Beijing and aligned with Washington. But the two countries have not been able to banish their fear of U.S. abandonment, ever conscious that a future U.S. president may not be as committed to the region or as embracing of America's allies as the current White House occupant. 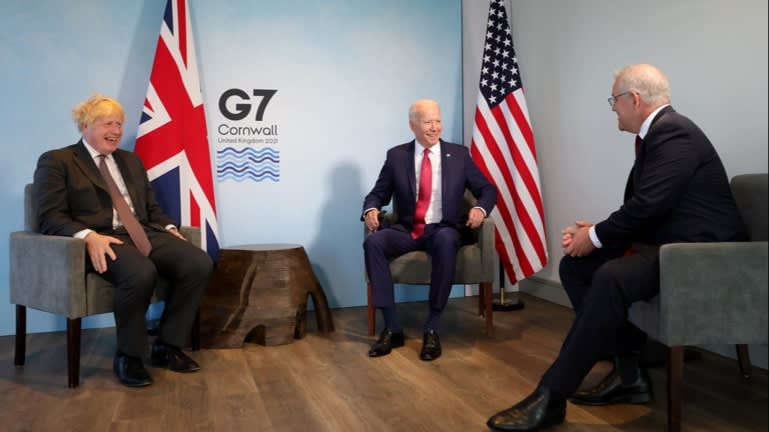 British Prime Minister Boris Johnson, U.S. President Joe Biden and Australian Prime Minister Scott Morrison meet for a trilateral during the G-7 Summit in Carbis Bay, Cornwall on June 12. Morrison did not have a bilateral with Biden. (Photo courtesy of 10 Downing Street)

Quietly surfacing in the Indo-Pacific are a handful of new groupings of middle powers. They include an initiative between Japan, India and Australia to achieve supply-chain resilience in the Indo-Pacific region, while reducing trade dependence on China. Another is the Australia-India-Indonesia trilateral dialogue addressing a wide range of topics including illegal fishing and counterterrorism.

But the most consequential appears to be the new quasi-alliance emerging between Australia and Japan.

At a recent two-plus-two online meeting of defense and diplomatic chiefs, the Japanese side agreed that Japanese Self-Defense Forces personnel will provide protection for weapons and other equipment for Australian Defense Force units, making Australia the second country allowed to receive such protection after the U.S., Japan's sole treaty ally.

The two sides also agreed to sign a reciprocal-access agreement at the earliest possible opportunity. The agreement will make it easier for ADF soldiers to freely move in Japan and vice versa. This is expected to lead to more joint exercises and enhance interoperability.

"The Japan-Australia relationship is moving in a direction to a class of its own, just below the relationships they respectively have with the U.S.," said Jeffrey Hornung, a Japan-focused political scientist at Rand Corp. An Australian MH-60R Sea Hawk flies past the USS Mustin during a tri-lateral exercise with the U.S. Navy and the Japanese Maritime Self-Defense Force. (Photo courtesy of the U.S. Navy)

Whereas Japan traditionally treated fellow democracies Australia and India in similar ways, Hornung said Australia was now pulling away from India in terms of security cooperation with Japan. The Japan-Australia reciprocal-access agreement will be a model for countries such as the U.K. and France to sign with Japan next, likewise enhancing interoperability.

"There is a realization that U.S. power is not what it used to be and that the U.S. cannot do it alone especially against China," Hornung said. "I see this as supporting the status quo, understanding that strengthening relationships with your ally's ally actually helps your ally and your own situation."

Tobias Harris, a senior fellow at the Washington-based think tank Center for American Progress, said Japan has positioned itself at the center of a network of relationships in a way that it had not before. "It's a central driver of the Quad," Harris said, referring to the Quadrilateral Security Dialogue with the U.S., Australia and India. "Japan's relationship with the EU and the U.K. are stronger, bringing both players into the Indo-Pacific. The relationship with India has been taken to new levels during the Abe years." Harris said Japan's willingness to take the lead in the Trans-Pacific Partnership after the U.S. left the trade pact was significant in signaling that Japan was ready to play a leadership role and not just be a sidekick to the U.S.

Traditionally Japan has always tried to hedge against the fear of U.S. abandonment by nurturing relations with China. "That doesn't seem as active a hedge these days," as Beijing embarks on wolf-warrior diplomacy, Harris said.

"But there is a second hedge," Harris noted, one in which Japan tries to keep close ties with as many other democratic powers as possible.

"Recognizing that if the U.S. is going to be less reliable, or if we can't necessarily assume the U.S. is going to be there that we have to have strong ties with Australia and India of our own," he said. "The latest steps with Australia, whether it's a quasi-alliance or something looking more like an actual alliance, all that is interesting to watch. Japan definitely has a few different hedges running."