Japan, India, Australia and US to collaborate in tech, funding and rule-making 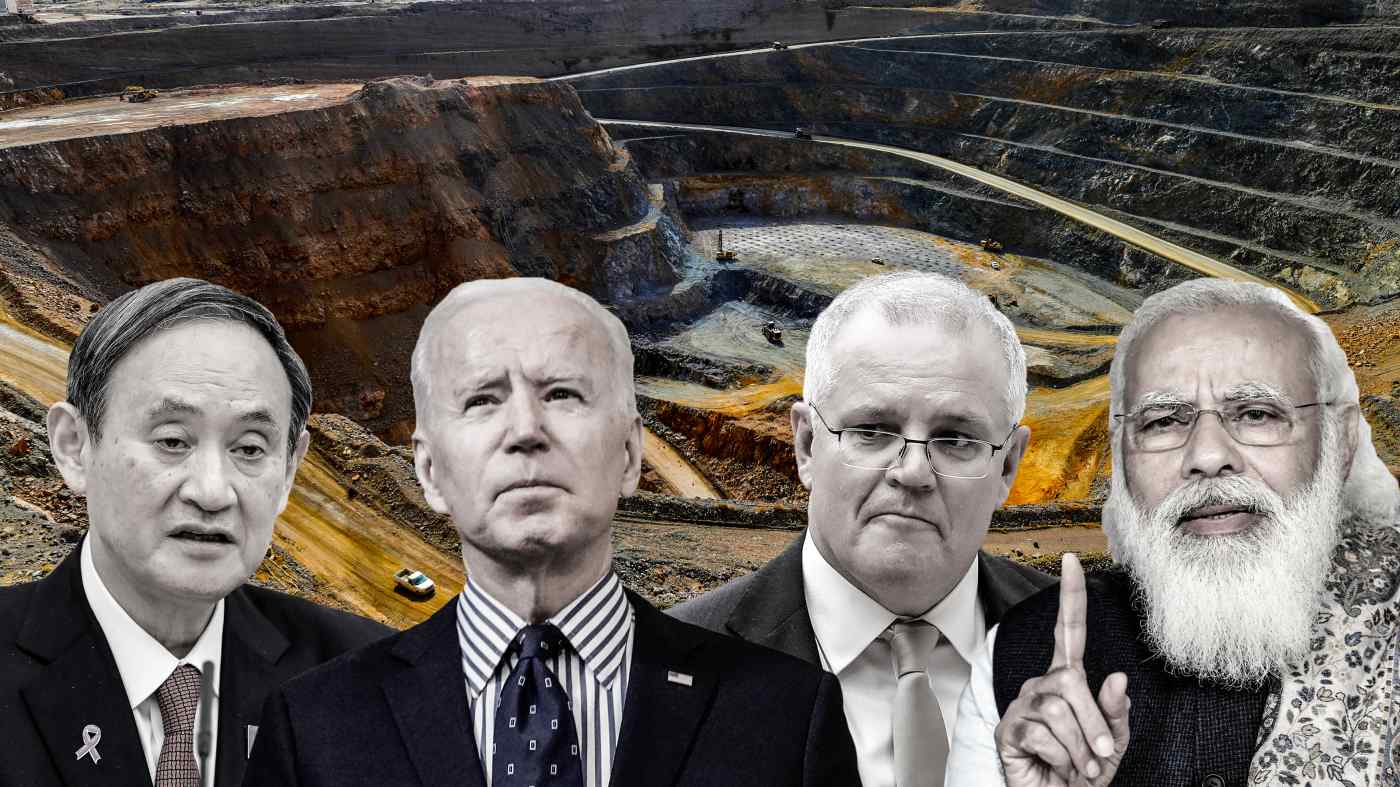 TOKYO -- The U.S., Australia, Japan, and India are on the verge of joining hands to build a rare-earth procurement chain to counter the dominance China plays in supplying these crucial elements to makers of everything from smartphones to high-performance motors to EV batteries.

China currently produces nearly 60% of the world's rare earths, and its market power has posed supply concerns. The Quadrilateral Security Dialogue nations intend to counter this by cooperating in funding new production technologies and development projects. They also intend to lead the way in drafting international rules.

In addition, they are likely to agree to cooperate in supplying COVID-19 vaccines to developing countries.

The metals are also essential for wind turbines and other "decarbonization" infrastructure.

The world's No. 2 economy has a near-monopoly on the separation and purification of rare earths, processes that create concerns regarding environment and soil damage.

It has less control in mining these elements. The U.S. exports domestically produced rare-earth ores to China, then imports 80% of its refined rare earth supplies from China.

According to the U.S. Geological Survey, China in 2020 accounted for 58% of the globe's rare-earth production, down from around 90% some four years ago as the U.S. and Australia have gradually boosted their own production.

China has positioned rare earths as strategic resources and has used its near-monopoly as a diplomatic bargaining chip. In 2010, supplies of Chinese rare earths to Japan came to a halt after Tokyo nationalized the Senkaku Islands. Japan says its sovereignty over the East China Sea islets is not under dispute, but China, which claims the islands and calls them Daoiyu, reacted angrily.

When China halted rare earth shipments, prices of some of the metals skyrocketed nearly ninefold.

And it appears China is not finished engaging in rare earth diplomacy; it recently announced it is considering limits on exports.

As for their rare-earth efforts, the Quad nations will first develop refining technologies. Rare-earth veins often contain radioactive materials, and a large amount of radioactive waste is produced in the refining process, which is what China dominates.

Partially due to its lax environmental restrictions, China has built up a price advantage in the rare earth market. As a result, the Quad countries will focus on coming up with low-cost, low-radioactive-waste refinement technologies.

The four partners also plan to arrange for government-affiliated financial institutions to provide syndicated loans to the mining and refining businesses.

The U.S. government is already supporting plans to process Australian ores in the U.S., and Japan is weighing whether to take part in this arrangement.

The International Energy Agency, meanwhile, intends to establish rules to stop China's export controls. India is not a member of the IEA, but in January, at the behest of Japan, the U.S. and Australia, New Delhi and the IEA entered into a Strategic Partnership, strengthening their collaboration across a range of vital areas.

The IEA will call on European countries to join the discussion. It plans to create a framework of making member countries report on their rare-earth stockpiles and to tighten international monitoring.

According to data from the U.S. Geological Survey, the U.S. accounted for 16% of global rare earth production in 2020. Australia accounted for 7%, and India 1%.

While India accounts for 6% of the world's rare-earth reserves, Japan is one of the biggest rare-earth consumers. If the Quad nations can collaborate all along the chain, from production to consumption, their influence in the critical sector will rise.

Quad nations have additional incentives. Australia and China have been locking horns over trade and security, while India and China have been facing off in the disputed Himalayan border region. These clashes have prompted the four partners to deepen their military and economic cooperation.