COLOMBO -- Wavel Ramkalawan, the newly elected president of the Seychelles, must navigate the geopolitical tides swirling about his archipelago nation, which sits on the western edge of the Indian Ocean and is being courted by both China and India.

India's External Affairs Minister Subrahmanyam Jaishankar has already beaten his Chinese counterpart to Ramkalawan's door, an indicator of the strategic importance New Delhi sees in this small nation of islands that falls within its maritime security axis.

Jaishankar's late November meeting with Ramkalawan in Victoria, the capital of the Seychelles, follows the 59-year-old's historic election in October, which brought to an end more than forty years in power of the United Seychelles Party. Ramkalawan beat Danny Faure, the incumbent president, and consolidated a sea change in the 2016 polls for the National Assembly when his Linyan Demokratic Seselwa party won most seats.

The Indian minister's one-day visit has revived speculation in the Seychelles over India's proposal to build a military facility on Assumption Island, which is on the outer edge of the 115 islands in the archipelago that is best known as an idyllic tourist destination. Observers in Victoria told Nikkei Asia that India's plans for Assumption Island remain high on New Delhi's agenda as it competes for regional influence with China.

"Assumption is not just about an airstrip and naval jetty," Dennis Hardy, emeritus professor and former vice chancellor of the University of Seychelles, told Nikkei. Leaked reports, he said, include plans for a garrison of up to 500 military personnel. "It is extraordinary that a small island state with a population below 100,000 can have this attraction to a world power," he said. 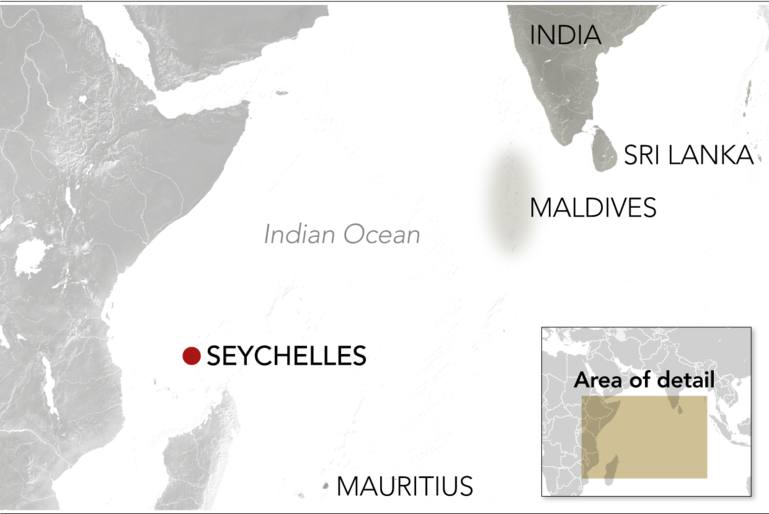 India has been pushing for deeper security ties with Indian Ocean nations to its south and southwest: Sri Lanka, the Maldives, Mauritius and the Seychelles. But Ramkalawan now finds himself in an awkward diplomatic spot as a result of the stances he adopted during his years in opposition. In 2015, for example, he campaigned against India's plans for Assumption Island, and forced them to be shelved.

Ramkalawan is himself of Indian ethnicity, but has left his supporters guessing since his election about how he plans to deal with India. "Our sovereignty is sacred and at no moment will we give it to another country," he said during a post-election speech.

Hardy, who edits the Seychelles Reseach Journal, believes that comment was a sign that the president is steeling himself to navigate some choppy diplomatic waters: "Does it mean that no foreign nation can have a military presence?" Hardy asked. "Or can a scheme be devised to enable some development to go ahead but perhaps under joint stewardship? I suspect that something along those lines will happen, although not without trying to balance things with China." 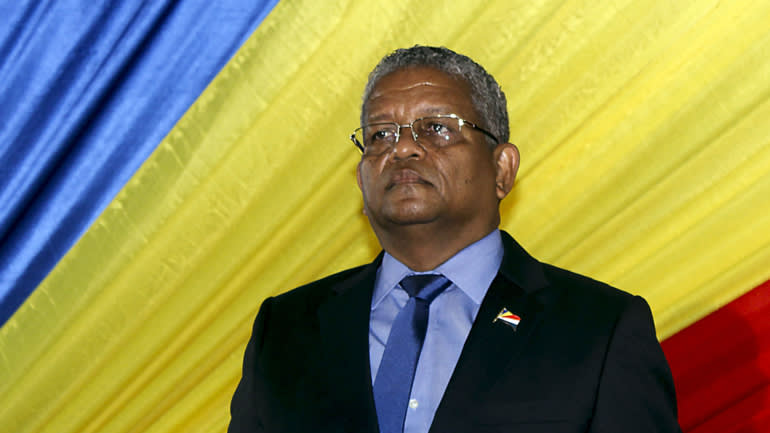 President Wavel Ramkalawan of the Seychelles at his inauguration ceremony at the State House in the capital Victoria on October 26.   © AFP/Jiji

India has made better headway with neighboring Mauritius, another archipelago that has a predominantly ethnic Indian ethnic population. In 2015, Prime Minister Narendra Modi signed an agreement to build a military facility there -- the same year he failed to make similar headway with the Seychelles. The Mauritian base has progressed with limited protest among the population of 1.3 million people.

Indian assistance of about $90 million to the Agalega Islands off the northeastern coast of Madagascar included construction of a new jetty and an airport upgrade for coast guard use, which has all gone forward.

"There was a small protest movement against India's construction of a military facility in the two Agalega Islands, but it has not had the same level of success found by the opposition in Seychelles," Nilanthi Samaranayake, director of strategy and policy analysis at the Center for Naval Analysis in Washington, told Nikkei.

India's attempts to establish security footholds in Mauritius and the Seychelles are part of a broader design by New Delhi to develop a maritime security axis in a stretch of the Indian Ocean where China has gone on a building spree. Chinese largesse built a new parliament building and supreme court in the Seychelles. China has also donated two light aircraft and two naval vessels to the Seychelles.

India's concerns about maritime security were aired at the trilateral maritime security dialogue in Sri Lanka held in November. It was the first such meeting in six years, and Indian National Security Advisor Ajit Doval met with his counterparts from Sri Lanka and the Maldives. Officials from Mauritius and the Seychelles attended as observers.

Security analysts believe India has become more active in the Indian Ocean because of its deepening defense ties with the U.S. that has been promoting its Free and Open Indo-Pacific strategy. That initiative is intended to ensure freedom of navigation in some of the world's busiest shipping lanes.

India also belongs to Quad -- a security grouping with Australia, Japan and the U.S. that is meant to counterbalance China in the Pacific and Indian Oceans.

According to Harsh V. Pant, a professor of international relations at King's College London, New Delhi is gearing up "a more robust security posture and its presence in the Indian Ocean is being beefed up." The maritime engagement with island nations in the Indian Ocean on the periphery of India's sphere of influence is part of that dynamic, he said.

"India wants to play a larger role today commensurate with its growing economic and military capabilities and its aspirations," said Pant. "America's Indo-Pacific strategy dovetails well with this posture of India."