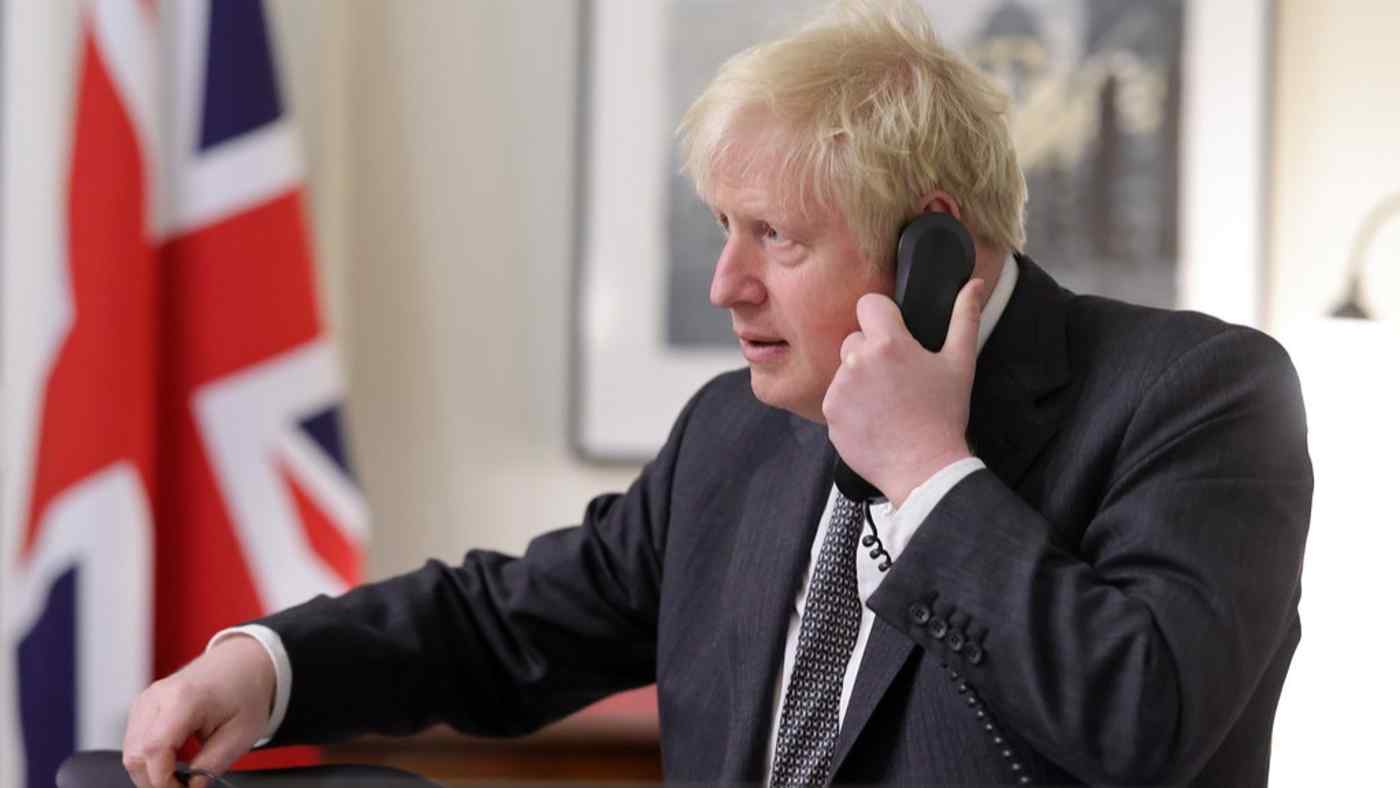 British Prime Minister Boris Johnson inside his office in No. 10 Downing Street on Dec. 7. The U.K. is looking to strengthen ties with democracies in the Asia-Pacific region. (Photo courtesy of No. 10 Downing Street)
YUSUKE NAKAJIMA, Nikkei staff writerDecember 16, 2020 02:54 JST | Europe
CopyCopied

LONDON -- The British government has invited South Korea, India and Australia to a meeting of leading industrial countries it will chair next year as "guest nations."

The invitation to the Group of Seven summit reflects Prime Minister Boris Johnson's "ambition to work with a group of like-minded democracies to advance shared interests and tackle common challenges," his office said Tuesday while announcing Johnson will visit India next month.

After leaving the European Union this year, the U.K. has been strengthening its ties with countries in the Indo-Pacific, including informal discussions over joining the Comprehensive and Progressive Agreement for Trans-Pacific Partnership, also known as TPP-11.

The invitation to the three countries is an extension of that effort, expanding cooperation with regional democracies and keeping check of China's increased maritime activities in the region.

The idea of creating a new "D-10" alliance of the world's 10 largest democracies, by adding Seoul, New Delhi and Canberra to the G-7, has gained traction among Conservative Party members who are increasingly skeptical of China.

Beijing's tightening grip on Hong Kong is seen as a breach of the promises that were set when the U.K. returned the territory to China. Worries that the U.K. in too dependent on China, be it in 5G communications, natural resources or personal protective equipment, has added wind to these sails.

The Johnson administration looks willing to lay the foundations of a D-10 at the 2021 summit, marking a new milestone for democracies of the world.

U.S. President Donald Trump, the 2020 chair, had said he wanted to invite the three countries plus Russia to the G-7. That summit was ultimately canceled due to the pandemic, but the U.K. and other European members were strongly opposed to bringing back Russia, which had been kicked out of the grouping after its annexation of Crimea.

Johnson has not invited Moscow to the U.K. summit.

Japan, long the sole Asian representative in the G-7, reportedly opposed Trump's proposal to expand the summit, especially the participation of South Korea on the grounds of differences in policy on China and North Korea.

Ahead of the G-7, Johnson will travel to India in January, marking his first major visit since taking office.

"I am absolutely delighted to be visiting India next year at the start of an exciting year for Global Britain, and look forward to delivering the quantum leap in our bilateral relationship that Prime Minister [Narendra] Modi and I have pledged to achieve," Johnson said.

"As a key player in the Indo-Pacific region, India is an increasingly indispensable partner for the United Kingdom as we work to boost jobs and growth, confront shared threats to our security and protect our planet."

He added that: "As the 'pharmacy of the world' India supplies more than 50% of the world's vaccines, with over a billion doses of the U.K.'s Oxford/AstraZeneca vaccine being manufactured at India's Serum Institute in Pune."

During the visit, Johnson will be only the second British leader since Indian independence to attend India's annual Republic Day parade in New Delhi as guest of honor, after John Major in 1993.