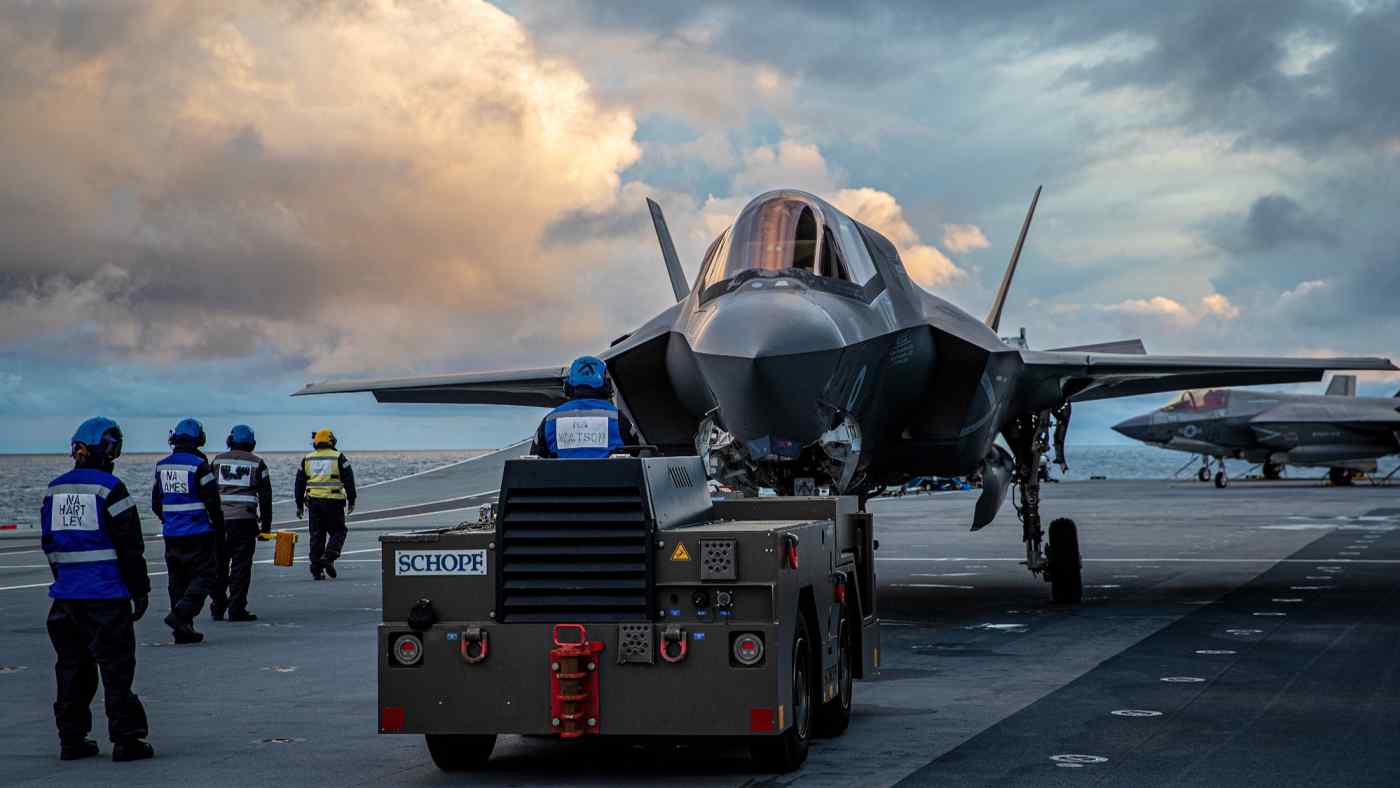 TOKYO/BEIJING -- In June 2018, the British navy's flagship amphibious assault ship HMS Albion pulled into the No. 8 berth of Yokosuka Naval Base in Japan, just across from the No. 12 berth, the home of the U.S. Navy's forward-deployed aircraft carrier USS Ronald Reagan.

After vehicles were offloaded, a green net was hung in front of the hangar door, indicating that repairs were being conducted during the port call.

The Albion was one of three ships the Royal Navy dispatched to Japan that year as tensions on the Korean Peninsula had heightened to the brink of open conflict and London anticipated evacuating British nationals from South Korea if necessary.

The maintenance at the Yokosuka dock, with Japan's Self-Defense Forces providing support, demonstrated Japan's value as a port of call. This laid the groundwork for the U.K.'s decision to deploy ships for an extended period of time to Asia.

As soon as early next year, the Royal Navy will dispatch an aircraft carrier strike group, including the 65,000-ton Queen Elizabeth, to waters near Japan. 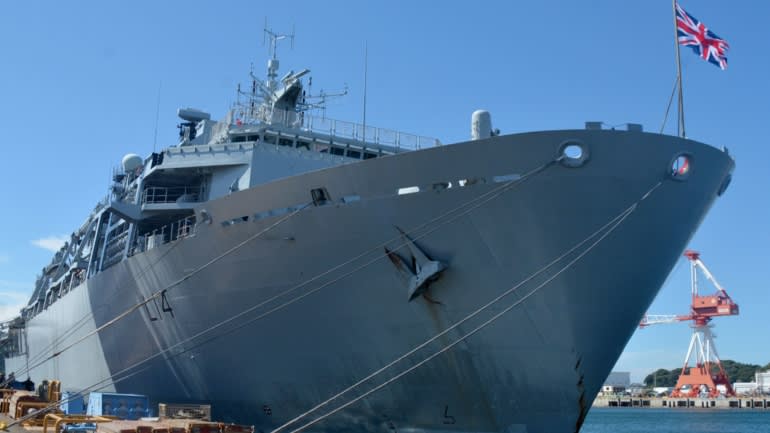 The deployment would send the strike group through the Mediterranean Sea, the Suez Canal, the Indian Ocean and the South China Sea, resupplying at British and American naval bases along the way, with U.S. forces in Japan offering additional assistance.

In the broader picture, it signals the U.K.'s desire for a greater voice in Asian geopolitics, potentially putting itself forward as a fifth member of the "Quad" grouping now consisting of the U.S., Japan, India and Australia.

In the immediate future, the Royal Navy looks to be offering assistance to the U.S. Navy, whose own naval capabilities have taken a hit from the coronavirus outbreak that forced the USS Theodore Roosevelt aircraft carrier to halt operations earlier this year, as well as the fire that gutted the USS Bonhomme Richard amphibious assault ship in July.

The U.S. Navy has decided to decommission and scrap the Bonhomme Richard, nearly 20 years early, putting a dent in deployment plans. A helicopter fights a fire on the amphibious assault ship USS Bonhomme Richard in July, when it was moored pierside at Naval Base San Diego. (Photo courtesy of the U.S. Navy)

Though the move had been discussed behind the scenes for some time, the recent fraying of the U.K.'s relationship with China gives the British deployment added significance. Beijing has undermined the "one country, two systems" framework for Hong Kong that the U.K. and China had agreed to for the 1997 handover -- much to London's chagrin.

After news of the deployment broke, the Chinese Communist Party-run Global Times ran an analysis that painted the move as "militarily insignificant" in the eyes of Chinese experts.

"The Queen Elizabeth aircraft carrier has not yet achieved full combat capability, and its aircraft are also not yet fully ready," military expert Song Zhongping said in the piece. "Sending a carrier that is not combat-ready to the western Pacific will only expose its shortcomings."

Typical roles played by carrier strike groups include projecting power in distant areas during conflicts, including quasi-military operations such as rescuing citizens abroad, and shows of force to increase international clout.

The influence that individual countries have on the international stage depends partly on the forces they can bring to bear in a conflict or another emergency. During the Korean War, the cruiser HMS Belfast participated as part of United Nations forces.

During the 1982 Falklands War, when the U.K. retook control of territories in the South Atlantic that had been occupied by Argentina, the British Royal Navy deployed the HMS Invincible, a 20,000-ton aircraft carrier that was then one of the largest vessels in its fleet.

But after the third ship in the Invincible class, the HMS Ark Royal, was decommissioned in March 2011, the navy was temporarily left without an aircraft carrier. The impact was felt quickly: When a NATO-led coalition moved to topple Libyan leader Moammar Gadhafi that year, the U.K.'s lack of a carrier limited its role in the conflict. That made the 2017 commissioning of the Queen Elizabeth all the more welcome.

After spending six years without any carriers, the navy needs to update its logistical know-how to supply the support needed for a long-term deployment of a force as large as a carrier strike group and give young officers and troops the experience needed to learn it as well.

Meanwhile, the Indo-Pacific looks increasingly likely to be central to geopolitics in the coming years.

France, which has territories in the South Pacific and Indian Ocean and considers itself an Indo-Pacific power, is also expected to send a carrier or other forces to the region before long.