Soldiers look out of a CH-47F Chinook helicopter over the Hawaiian Islands. Finding new bases in the Indo-Pacific will be a political challenge for the Biden administration. (Photo courtesy of the U.S. Army)
KEN MORIYASU, Nikkei Asia chief desk editorMay 12, 2021 05:34 JST | North America
CopyCopied

NEW YORK -- The U.S. is reviewing its Indo-Pacific military footprint to prepare for great-power competition against China, with the Army cultivating and strengthening partnerships with key Southeast Asian players.

The objective is to have a nimble expeditionary joint force spread widely across the region that is difficult for an adversary to strike in a single blow, yet still close enough to such critical areas as the Taiwan Strait.

But adding new military bases, or even securing airfields and ports that the U.S. Army, Navy, Air Force and Marine Corps can use on a rotational basis, is easier said than done.

This year marks a quarter century since Washington agreed to relocate Marine Corps Air Station Futenma from a densely populated part of Japan's Okinawa Prefecture to a less-crowded area. Even this logistical task -- moving what has been dubbed "the most dangerous base in the world" to a safer location -- remains unfinished, reflecting the burdensome nature of basing and deployment.

Nonetheless, the U.S. is carefully laying the groundwork for such future requests.

In a spate of military diplomacy, the U.S. Army is positioning itself as an emissary for creating vital strategic opportunities in the region.

Acting Army Secretary John Whitley, in a webinar hosted by the Atlantic Council on Monday, said that "the Army, nested with diplomacy in the State Department, can be a steadfast partner and a key to opening doors in some countries."

He spoke of the service's Indo-Pacific trust-building efforts -- specifically naming Indonesia, Thailand, Vietnam and India -- that in the long term could lead to more access, basing and overflight rights. "We're talking to Indonesia -- they want to build a combat training center," Whitley said. "And we would talk to them about that and how we might be able to assist them. We have ongoing engagements in Thailand with Strykers. And we have Vietnam -- we have warehouses for humanitarian assistance. And our engagement on cold-weather gear, on artillery and other forms of assistance in India have been very promising over the last year or so."

"When you think about what our partners and our potential partners in the Pacific are looking for, they're not looking for 'either/or' questions that force them to publicly declare an allegiance to us over the neighbor that they have to continue to live next to," Whitley said. "What we observe that they want are kind of scalable, incremental partnership and capacity-building relationships," he explained.

"And what you do over time is you invest in that, and that starts to give you the access, the types of authorities for basing and overflight and other types of things that you might need to partner with them in the event that something were to go catastrophically wrong and our deterrence was unsuccessful and we were to end up in a kinetic engagement in the region," Whitley said.

Why the Army? The theater has traditionally been the realm of the Navy and Marine Corps. "In many of these countries, the chief of defense is army," he said.

Of the partnerships Whitley mentioned, the U.S. Army's collaboration with the Indonesian Army may be the deepest.

In the first such trip, Indonesian soldiers learned to shoot, move and communicate from American soldiers with Iraq and Afghanistan combat experience.

Now the Indonesians want a combat training center of their own, Whitley said. In Thailand, the U.S. is in talks to sell additional Stryker infantry combat vehicles after making the southeast Asian kingdom the first foreign recipient of the wheeled armored vehicles in 2019.

Traditionally, the U.S. has consolidated its forward-deployed forces in several key countries. Japan hosts 55,000 American troops, mostly from the Navy and the Marines, while South Korea hosts roughly 26,400, mostly from the Army. Guam is home to a major military contingent, while American troops visit Australia, Singapore and the Philippines on a rotational basis.

But with the advances in Chinese missiles that can destroy American assets stationed at a base in a single strike, the Pacific Deterrence Initiative submitted to Congress by the U.S. Indo-Pacific Command notes that the future force design needs to "create the virtues of mass" through the convergence of multiple domains, but "without the vulnerability of concentration."

The PDI envisions fielding an integrated joint force with precision-strike networks west of the international date line along the so-called first island chain and "a distributed force posture."

The precision-strike capability -- "long-range fires," as the Army calls them -- are aimed at defeating the Chinese anti-access/area denial (A2/AD) shield, which seeks to push American forces out of the East and South China seas within the first island chain. Specifically, the U.S. has made it known that it wants to stand up its second multidomain task force (MDTF) in the Indo-Pacific, following the first one recently launched at Joint Base Lewis-McChord, Washington state.

The task force will likely be outfitted with land-based deep-strike capabilities. Army leaders envision the specialized units each comprising about 500 personnel, including from other services.

In April, the Pentagon announced that it will set up a Multi-Domain Task Force and Theater Fires Command in U.S. Army Garrison Wiesbaden, Germany, with approximately 500 soldiers.

In a March 30 webinar hosted by the Center for Strategic and International Studies, Army Chief of Staff Gen. James McConville was asked how much of a political challenge it would be to persuade such allies as Japan to let the U.S. base MDTFs and mid- to long-range weapons on their territory.

It is a "political decision," the four-star general said, "that will be shaped by diplomacy between our countries and our allies and partners, based on their national security interests."

"That'll be one of those type [of] things that each country's going to have to take a look at that, and see what type of capabilities they're willing to accept," McConville said.

But Gen. Paul LaCamera, the commanding general of U.S. Army Pacific, said in the same webinar: "We have some treaty allies out here, and we'll work with them," suggesting that America's five official allies in the region -- Japan, South Korea, Australia, Thailand and the Philippines -- will be the first stop on such negotiations.

Jeffrey Hornung, a Japan-focused political scientist at Rand Corp., said the political backlash to hosting long-range missiles in Japan could be harsh.

"Aegis Ashore was a defensive system that was going to be manned by Japanese personnel, and that failed," he said, referring to the cancellation of placing two land-based missile defense systems in Japan. "How are you going to convince the local communities to host U.S. offensive systems, manned by U.S. personnel, when you're guaranteeing that that is going to be a target in the first wave of attack?" 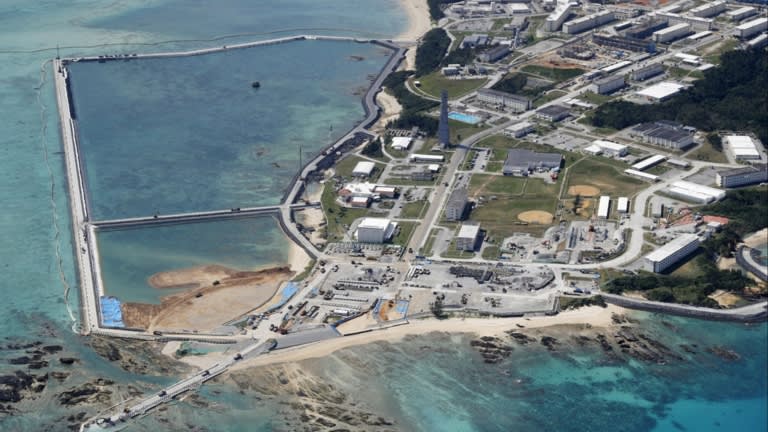 In Okinawa -- home to more than 70% of U.S. base land in Japan, despite accounting for just 0.6% of Japan's land area -- the Biden administration's global posture review is being carefully watched.

A group called the Bankoku Shinryo Council, a U.S.-Japan expert advisory council to Okinawa Gov. Denny Tamaki, submitted in March a report titled "Recommendations Toward Reducing the Burden of Military Bases on Okinawa in the New Security Environment" that noted that the new operational concepts and other U.S. efforts taking shape will have "profound implications" for the American military presence in Okinawa.

In a webinar last week featuring council members, George Washington University political scientist Mike Mochizuki said that "there are two somewhat contradictory tendencies" for Okinawa that emerge out of the great-power competition between the U.S. and China.

"One is given the rise of Chinese military capabilities, the U.S. military assets on Japan, and especially in Okinawa, are becoming more vulnerable, and therefore there will be strong incentives on the part of the United States to disperse this military presence, to move away from the current structure of a few highly concentrated military bases in Okinawa and Japan, to disperse this military presence to other parts of Japan and throughout the region," Mochizuki said.

"But at the same time, precisely because of this vulnerability and China's anti-access and area denial capabilities, there will also be strong incentives on the United States to make much more robust and resilient the existing U.S. military presence in Okinawa, as well as the rest of Japan," he said.

Yet Mochizuki said that as Japan's importance in the Indo-Pacific rises, "Japan and Okinawa should not hesitate to voice its concerns to the United States about the intensification of U.S.-China strategic rivalry, and to suggest ways to reduce the U.S. military presence and burden on Okinawa."

2022 will mark 50 years since Okinawa's reversion to Japan.