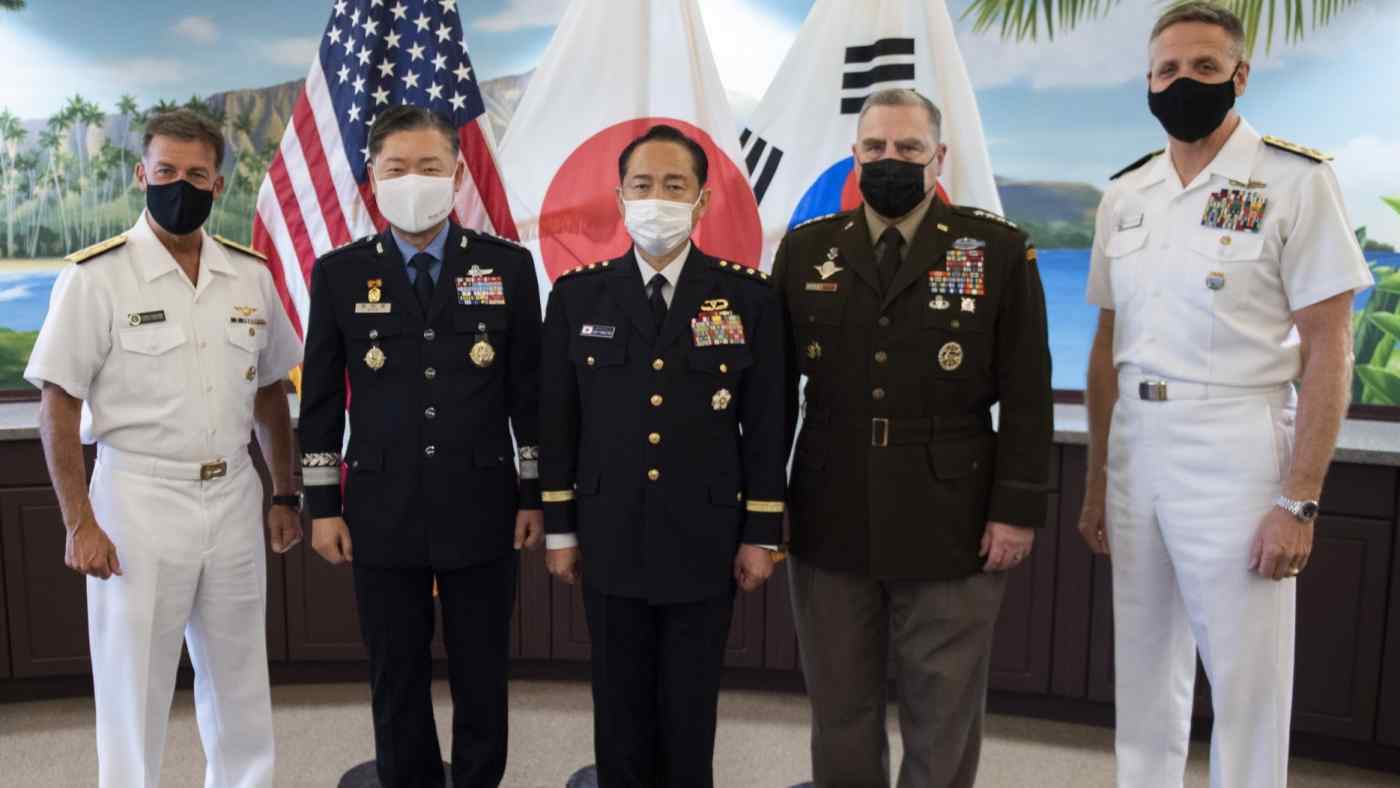 The joint chiefs of staff of South Korea, Japan, and the U.S., center left to right, addressed North Korea in their meeting in Hawaii. (Photo courtesy of Japan's Ministry of Defense)
JUNNOSUKE KOBARA, Nikkei staff writerMay 3, 2021 03:30 JSTUpdated on May 3, 2021 05:19 JST | North America
CopyCopied

TOKYO -- The top uniformed officials of the U.S., Japan and South Korea met recently in Hawaii to address concerns about North Korea and discuss the importance of promoting a rules-based international order in the region.

"The three parties shared their concerns about North Korea's nuclear and ballistic missile programs and discussed the importance of promoting a rules-based international order in the region," the U.S. side said in a news release.

Won emphasized the importance of cooperation among the trio to ensure peace and security on the Korean Peninsula and in Northeast Asia, while Yamazaki stressed the need to work together toward North Korea's full compliance with United Nations Security Council resolutions.

In a bilateral meeting the following day, Yamazaki and Milley reaffirmed that "the United States and Japan remain opposed to any unilateral attempts to change the status quo in the East China Sea," according to the American side's readout.

The exchange between the SDF and the American military came on the heels of Japanese Prime Minister Yoshihide Suga and U.S. President Joe Biden confirming the "importance of peace and stability of the Taiwan Strait" in their April summit. 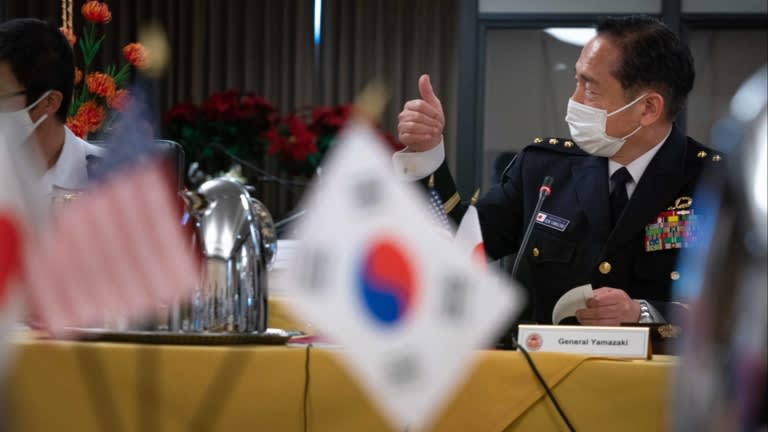 Gen. Koji Yamazaki, chief of staff of the Japan Self-Defense Forces' Joint Staff, takes part in a three-way meeting with his American and South Korean counterparts in Hawaii. (Photo courtesy of the Office of the Chairman of the U.S. Joint Chiefs of Staff)

Tensions in the East China Sea have been rising, with China sending its Liaoning aircraft carrier between Japan's Okinawa and Miyakojima last month. China Coast Guard ships have repeatedly made incursions in the waters near the Japan-administered Senkaku Islands, which are claimed by China.

Yamazaki and Milley discussed "the United States' unwavering commitment to the defense of Japan" under Article 5, according to the readout, referring to the portion of the bilateral security treaty interpreted to mean that the U.S. would treat any attack on Japanese territory as equivalent to an attack on American soil.

As China bolsters its military, Japan and the U.S. are stepping up coordination in the region with European countries. The U.K. is deploying its HMS Queen Elizabeth carrier to Asian waters, including a port call in Japan. France will take part in defense drills with Japan and the U.S. this month as well.

Yamazaki, who traveled to Hawaii to attend the changeover ceremony for the U.S. Indo-Pacific Command, discussed conditions relating to Japan and the Indo-Pacific region with the new commander, Adm. John Aquilino.