NEW YORK -- The U.S. Navy's 7th Fleet, based in Yokosuka, Japan, covers an area stretching from Hawaii to the India-Pakistan border, encompassing the maritime territories of 36 countries and 50% of the world's population.

It is the largest of the Navy's forward deployed fleets, that has under its jurisdiction at any given time 50 to 70 ships and submarines, 150 aircraft and approximately 20,000 sailors.

But if the U.S. is truly willing to have a Indo-Pacific presence, it needs a new "1st Fleet" in the Pacific based closer to the Indian Ocean, possibly in Singapore, Navy Secretary Kenneth Braithwaite said Tuesday.

"We want to stand up a new numbered fleet. And we want to put that numbered fleet in the crossroads between the Indian and the Pacific oceans," Braithwaite told a virtual audience attending a Naval Submarine League conference. "And we're really going to have an Indo-PACOM footprint."

"We can't just rely on the 7th Fleet in Japan. We have to look to our other allies and partners like Singapore, like India, and actually put a numbered fleet where it would be extremely relevant if, God forbid, we were to ever to get in any kind of a dust-up," he said in comments carried by USNI News, the publication run by the United States Naval Institute. Guided-missile destroyer USS Barry transits past Mt. Fuji as it arrives at Fleet Activities Yokosuka in Japan, home to the U.S. Navy's 7th Fleet. (Photo courtesy of the U.S. Navy)

"More importantly, it can provide a much more formidable deterrence. So we're going to create the 1st Fleet, and we're going to put it, if not Singapore right out of the chocks, we're going to look to make it more expeditionary-oriented and move it across the Pacific until it is where our allies and partners see that it could best assist them as well as to assist us."

The 1st Fleet was a Navy unit that existed from 1947 to 1973 to cover the Western Pacific Ocean as part of the Pacific Fleet. It's duties were assumed by the San Diego, California-based 3rd Fleet in 1973.

While Braithwaite's proposed new fleet would have different objectives from the original 1st Fleet, he sees it fitting to revive the name.

The Navy's existing numbered fleets are the 3rd Fleet which covers the Eastern Pacific, the 4th Fleet covering Central and South America, the 5th Fleet in the Middle East, the 6th Fleet for Europe, the 7th Fleet spanning the Western Pacific and the 10th Fleet handling cyber.

Braithwaite said he has not discussed the plan with Christopher Miller, the new acting defense secretary, but had otherwise "crossed all the other t's and dotted all the other i's."

USNI quoted a defense official saying that Braithwaite had come up with the idea to stand up 1st Fleet several months ago and had been in talks with former Defense Secretary Mark Esper, who was onboard with the proposal. 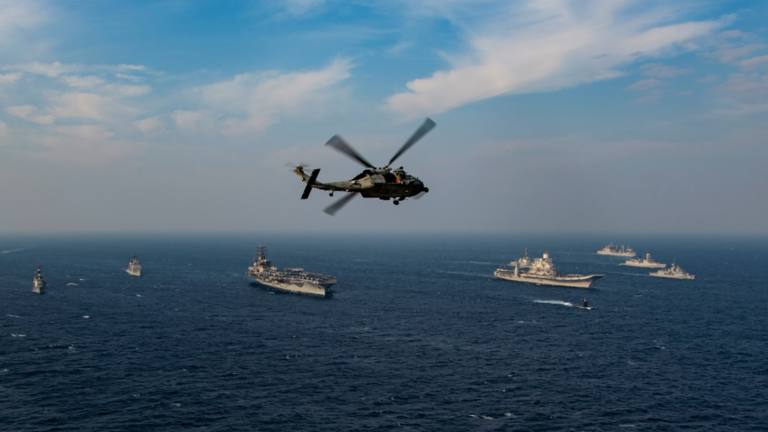 An MH-60S Sea Hawk helicopter flies over ships from the Indian navy, the Japan Maritime Self-Defense Force, the Royal Australian navy and the U.S. Navy as they sail in formation on Nov. 17 in the Arabian Sea as part of Exercise Malabar 2020. (Photo courtesy of the U.S. Navy)

Braithwaite, who became the navy secretary in May after serving as ambassador to Norway, said he saw firsthand China's aggressiveness around the globe and cited it as a reason for needing the new fleet. "Chinese presence in the Arctic is unprecedented. Most recently I was in a trip to the Far East: every single one of our allies and partners are concerned about how aggressive the Chinese have been. I would argue with anybody that not since the War of 1812 has the United States and our sovereignty been under the kind of pressures that we see today," he said.

The proposal comes as the U.S. deepens its engagement in the Indo-Pacific region. On Tuesday, the U.S. joined India, Japan and Australia began phase two of Malabar 2020, a four-day maritime joint exercise in the Northern Arabian Sea. Earlier in the month, the four countries, also known as the Quad, held phase one drills in the Bay of Bengal.

If discussions for a new numbered fleet were to advance, it would be one of the last major defense policies implemented by the Trump administration.

Michele Flournoy, former under secretary of defense for policy in the Obama administration and the presumptive defense secretary in a Joe Biden administration, said in an interview with Defense News earlier this month that the U.S. military needs to use existing capabilities in "new ways" to deter a rising China.

"In the near term I think we have to think about using what we have in hand in new ways," she said.

"How do I combine things in different ways that enable me to operate more effectively and better exploit ... vulnerabilities on the other side or magnify my own strengths in some way?"