US races to upgrade naval shipyards, wary of Chinese dominance NEW YORK -- A bipartisan group of U.S. lawmakers has proposed a $25 billion cash infusion into the nation's outdated naval shipyards to prepare for the great-power competition with China.

Concerns are mounting in the American defense community over the adequacy of vessel production and maintenance, considering the pace at which Beijing can build its own ships.

Chinese state media reported last month that President Xi Jinping had attended a commissioning ceremony for three naval vessels on the southern island of Hainan. The vessels were the nuclear ballistic missile submarine Changzheng-18, the destroyer Dalian and the amphibious assault ship Hainan.

A closer look at one of the shipbuilders -- Hudong-Zhonghua Shipbuilding in Shanghai, a unit of China State Shipbuilding Corp. -- shows the scale of China's capabilities.

The Hainan 31, China's largest amphibious assault ship, can transport and land the full force of its Marine Corps -- including a large number of troops, tanks and helicopters -- in hostile territory. Dubbed the "little aircraft carrier," its potential for "island-taking" has military planners around the world speculating what it may mean for the Taiwan Strait.

After delivering this brand-new Type 075 ship to the People's Liberation Army Navy on April 23, the shipyard that built it has been working nonstop.

Just in the week that followed, Hudong-Zhonghua delivered two ships, including an ultralarge containership for French shipping group CMA CGM; received orders for six new ships from that same company; began construction of a liquefied natural gas carrier; and sent three ships out into the water. 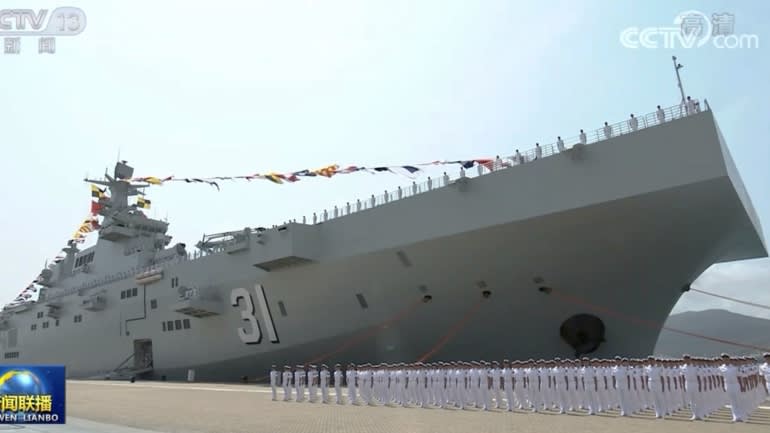 China's amphibious assault ship Hainan is seen at its commission ceremony in Hainan on April 23. (Screen shot of CCTV by Kyodo)

China is the top ship-producing nation in the world by tonnage and is "increasing its shipbuilding capacity and capability for all naval classes," according to the Pentagon's annual report to Congress on Chinese military and security developments.

In contrast, the U.S. is now down to four public shipyards -- in Norfolk, Virginia; Portsmouth, Maine; Puget Sound, Washington; and Pearl Harbor, Hawaii -- all of which are over 100 years old.

Until the mid-1990s, the U.S. had nine active naval shipyards, but many were closed down as the Cold War ended and the defense budget was trimmed in the name of the "peace dividend."

"Now the U.S.'s geopolitical outlook has changed, and the calculus for proper amounts of ship maintenance capacity should change in kind," Heritage Foundation analysts Brent Sadler and Maiya Clark wrote earlier this month. 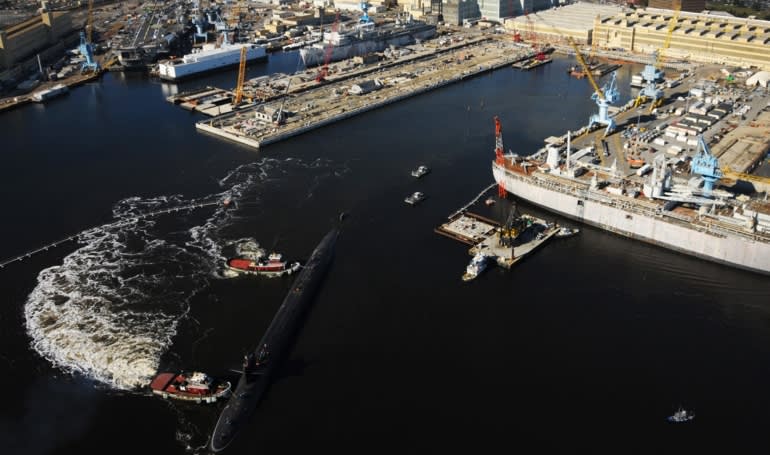 Clark told Nikkei Asia that the dry docks at these Navy shipyards are "getting to be too small to service the submarines and aircraft carriers that they need to service, as newer classes are being introduced."

There are a total of 18 dry docks at the public shipyards. Only two, one on each coast, can service the current Nimitz-class aircraft carrier. Neither of them have the features needed to service the next-generation Ford-class carrier, Clark said.

The bill submitted to Congress is aptly titled the SHIPYARD Act -- short for the Supplying Help to Infrastructure in Ports, Yards and America's Repair Docks Act of 2021. It calls for the appropriation of $25 billion -- $21 billion for the four public shipyards and $4 billion for private shipyards the Navy uses -- to repair, upgrade and modernize the yards' facilities.

The Navy originally had a plan to spend $21 billion over 20 years to renovate its aging public shipyards. The SHIPYARD Act proposes to make that a one-time payment to the Navy to accelerate the updates.

"We're making significant investment," he said. "These are once-in-a-century investments in these shipyards that I'm not going to come off of, at least while I'm CNO. It has to be a priority," Gilday said. The 1,000-ton deckhouse of the destroyer USS Zumwalt (DDG 1000) is craned toward the deck of the ship to be integrated with the hull at General Dynamics' Bath Iron Works in Maine. (Photo courtesy of the U.S. Navy)

"One of the most important reasons I am in Maine today is to ensure every person here knows their work is critically important to our Navy," Gilday said, according to a news release. Guided-missile destroyers "are the workhorse of our fleet, and simply put, you can't get to the fight if you don't have ships to sail there," he added.

Heritage analyst Sadler proposes that a "new Navy shipyard, perhaps on the West Coast, would be particularly important to timely maintenance for top priority Pacific operations."

One option would be to reopen Mare Island Naval Shipyard in Vallejo, California. about 40 kilometers northeast of San Francisco, Sadler told Nikkei. The shipyard was closed in 1996.

"If you're going to have a new West Coast shipyard, you don't want it geographically close to Bremerton, Washington where Puget Sound Naval Shipyard is, and you don't want it to be necessarily close to your other private shipyards that work down in Southern California."

Northern California would be best for geographical dispersal, Sadler said.

But Andrew Lautz, director of federal policy for the National Taxpayers Union, a conservative advocacy group, criticized the SHIPYARD Act as "a classic congressional fix to any problem -- throwing lots of money at it at a really fast pace."

Lautz pointed to a March report by the Congressional Budget Office for better alternatives. The CBO examined four options to fix the delays in maintenance at the yards: improve forecasting of shipyard maintenance needs, authorize the Navy to add more workers to its shipyards, start sending more submarines to private yards, and reduce the size of its fleet.

"There are more responsible options than what's in the SHIPYARD Act," Lautz said.