NEW DELHI -- The vaccine partnership announced by the Quad grouping comprising Australia, India, Japan and the U.S. is one of the most concrete takeaways from its leaders' first-ever summit this month, given that the world is still battling the COVID-19 pandemic more than a year after it struck.

Under the joint effort, the four nations plan to pool in their financial resources, manufacturing capabilities and logistics know-how to increase production and distribution of COVID-19 jabs to benefit the international community. India, the world's vaccine leader, which produces 60% of the world's overall vaccine needs, will make 1 billion doses of COVID-19 vaccine as part of an initiative to be financed by the U.S. and Japan, while Australia will help with "last-mile" and logistics and delivery.

This is expected to further bolster India's vaccine diplomacy, under which it has gifted or supplied commercially inoculants to neighbors and others, an area where China is also active. Here are the five things to know about the effort:

The Quad is looking at areas of cooperation where the strengths of the four countries can be leveraged to address the ongoing health crisis, which in turn will foster global economic recovery. At the same time, the group hopes to counter China's efforts to export vaccines by enhancing India's vaccine-making prowess.

"China is, of course, pushing the envelope on vaccines," Harsh V. Pant, head of the strategic studies program at New Delhi-based think tank Observer Research Foundation (ORF), told Nikkei Asia, adding that the Quad's effort will help challenge Beijing's ambitions. Also, he points out, the U.S. "has been accused of hoarding vaccines and looking inwards," a perception it can improve by funding Indian vaccine production to supply countries in need. 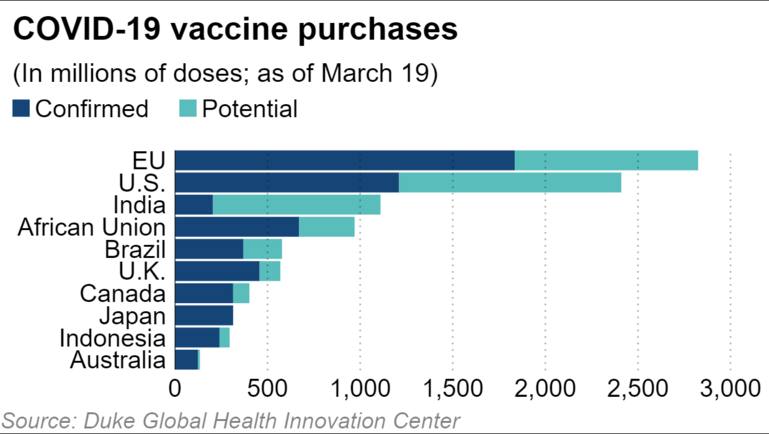 Hyderabad-based drugmaker Biological E will make 1 billion doses of COVID-19 vaccines, including the one developed by Johnson & Johnson, by 2022 under the Quad commitment. Established in 1953, Biological E supplies vaccines to more than 130 countries. Its therapeutic products are sold in India and the U.S.

Washington will help Biological E expand its COVID-19 vaccine output capacity, while Tokyo is in talks to provide concessional loans to India to expand production of vaccines for export. Australia will assist in vaccine supply, while focusing on last-mile delivery support in Southeast Asia.

What was the objective of the first Quad summit?

Analysts say the recent meeting of the Quad leaders was aimed at responding to the challenge posed by China's rise, even though they focused on a range of issues, including the COVID vaccine distribution and climate change.

"Their commitment toward [critical and emerging] technologies, over which they have set up a working group, is clearly aimed at China," Shamshad Ahmad Khan, a visiting associate fellow at the New Delhi-based Institute of Chinese Studies, told Nikkei.

"Safeguarding sensitive technologies was also one of the issues during the Cold War," he noted. "However, it has yet to be seen whether this Quad will accelerate a new Cold War, which [would] be disastrous for the region and the world, so both the Quad and China should tread cautiously."

Is China more concerned about the Quad now than before?

In 2018, Chinese Foreign Minister Wang Yi dismissed the Quad and its Indo-Pacific focus as an "attention-grabbing idea" that would "dissipate like ocean foam."

"Many a time what you see as ocean foam from a far off distance might turn out to be hardened ice once you go closer," said Pankaj Jha, a professor of defense and strategic studies at the O.P. Jindal Global University.

When the "Quad 1.0" process started more than a decade ago, China made all kind of noises to prevent it from taking off, he said, observing that Australia was concerned about the concept, and India, too, was reluctant. "But now, the whole situation has changed," he said, pointing to China's growing assertiveness, which has irked its neighbors, and also to the fact that the COVID-19 originated in the communist nation, inflicting pain on the entire world.

"Now, nobody is listening to China [and thus] it is more concerned about Quad 2.0," Jha said.

How are Russia and ASEAN affected by the Quad partnership?

Russia is a traditional ally of India, but the two countries have divergent interests.

"It is no secret now that Russia is not very happy with India ... going into the Indo-Pacific domain," said Pant of ORF, pointing out that "cracks" have already appeared in the relationship amid reports that Moscow did not want New Delhi to be part of the Afghan peace process.

Russia is almost acting like a "junior partner" of China, and is more supportive of Beijing's views, whether it is the Indo-Pacific or other issues, he said. With the Biden Administration talking about new sanctions, "clearly, the challenge for Russia is how to navigate that terrain, and in that context, it feels that China is a better partner because [Beijing] has the same worldview when it comes to managing Western perception."

As regards the 10-member Association of Southeast Asian Nations, Khan of ICS said, "The Quad has already divided the grouping into five-plus-five. One half [comprising the Philippines, Singapore, Vietnam, Malaysia and Indonesia] is tilting toward it, and some of them are also being coaxed to be part of a 'Quad-plus,' [while] the other half is keen to maintain ties with China."

To sum up, the concept of ASEAN centrality in the East Asian community "is gone and it has been taken by the Quad, which is likely to take the driving seat," he said.

Will India remain committed to the Quad in the future?

If China decides to resolve all its conflicts with India and dramatically shifts its position on Pakistan, which is Beijing's close ally and New Delhi's archrival, "then there might be a reason for India to reconsider the Quad," Pant said. "But specifically, what we have seen is ... China's ability to negatively impact India is growing every day. There's hardly any incentive [for India] to go slow on the Quad," he said.

Jha concurs, saying, "Now India is increasingly subscribing to 'Quad 2.0' and talking about the grouping and the Indo-Pacific in its official documentation, which technically means that from the structural and functional points of view, India has accepted this [framework]."