Indonesian submarine split into three and all 53 are dead: authorities

Jakarta will attempt to salvage the vessel and remains of crew JAKARTA -- All 53 crew members of a submarine that went missing last week off the northern coast of Bali have died, Indonesia authorities said Sunday.

The military said the KRI Nanggala 402 likely split into three. Search and rescue teams on Sunday morning found large pieces of debris -- including the damaged main body of the submarine -- at a depth of 838 meters, not far from the point where it was believed to have sunk.

"We've obtained images that have been confirmed to be parts of KRI Nanggala 402. Based on this authentic evidence, we can say that KRI Nanggala 402 has sunk and all the crew members have passed away," Indonesian Military (TNI) Chief Gen. Hadi Tjahjanto told a news conference late Sunday afternoon.

"On behalf of all soldiers and the big family of the TNI, I... express my deepest condolences. We hope we can all continue your exemplary services as the best soldiers of the TNI."

The military chief added that Indonesia will coordinate with the International Submarine Escape and Rescue Liaison Office to attempt to salvage the submarine and the remains of the crew members. 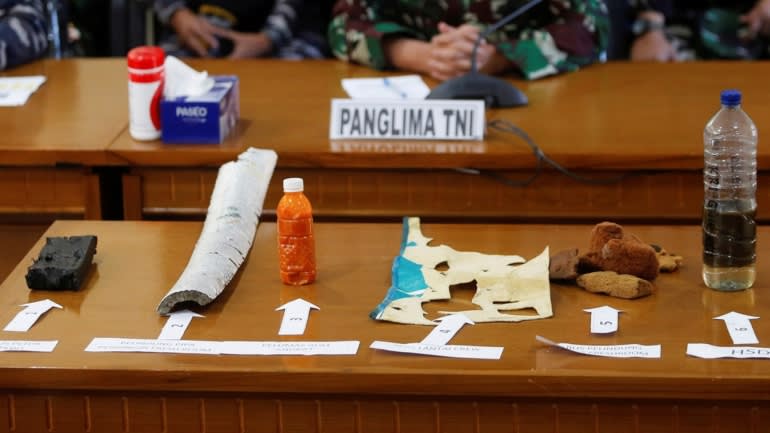 Debris from the missing Indonesian Navy KRI Nanggala-402 submarine are displayed during a media conference at Ngurah Rai Airport in Bali, Indonesia on April 24.   © Reuters

The navy chief added that an investigation into the cause of the accident would have to wait until the wreckage can be lifted. But he dismissed human error.

"We've evaluated, and we're sure it's not human error, but a natural cause," he said.

The equipment, however, could not go lower than 800 meters, so the search effort was continued by Singapore's MV Swift Rescue, a submarine support and rescue vessel. The MV Swift operated a remotely operated underwater vehicle that later confirmed the debris as belonging to the submarine.

"At a depth of 838 meters, the possibility is very small that KRI Nanggala crew members could be rescued," Margono said. "KRI Nanggala was split into three [major] parts." 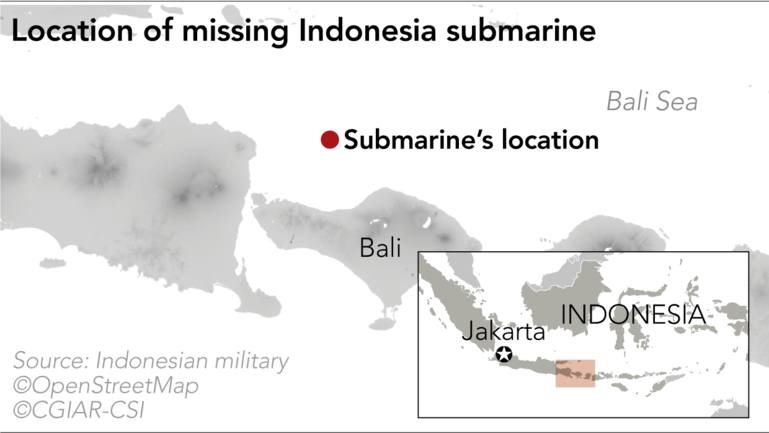 The submarine vanished in the early hours of Wednesday while conducting a torpedo-firing exercise. The last detected signal from the ill-fated vessel was from a depth of 850 meters, beyond its diving limit.

The last communication with the Nanggala was at 4 a.m. on Wednesday.

When the commander of the training task force tried to authorize the firing drill 25 minutes later, communication with the submarine could not be established. The vessel had been due to surface by 5:15 a.m. on Wednesday morning.

The German-built submarine has been in service since 1981, and underwent a full refit in South Korea that was completed in 2012.

The Indonesian Navy said it was "in good condition," but some local observers have said poor maintenance of Indonesia's aging military equipment might have been a contributing factor.