DUBAI/CAIRO/ISTANBUL -- Iranian President-elect Ebrahim Raisi appears determined to focus on preserving the country's Islamic regime, in a marked departure from incumbent President Hassan Rouhani's emphasis on reform and a more conciliatory stance toward the outside world.

The conservative hard-line leader, who currently heads the judiciary, will take the helm of the country amid simmering domestic and international problems, with discontent growing among citizens, especially young people eager for greater freedoms, and a chaotic outlook for negotiations between Iran and the international community to rebuild the 2015 nuclear agreement.

In late April there was an event -- unimaginable in an avowedly Islamic country -- in a mountainous region of central Iran: Young men and women drinking and dancing to the beat of loud club music. They weren't at the camping site to enjoy nature. "I don't like bugs, but there is no other place where I can be with my boyfriend," said 25-year-old Shiva bashfully as she spent time with him in a tent.

There were no religious police around to enforce Iran's strict Islamic laws. The number of "campers" has grown tenfold over the past several years as young people seek more personal freedom, a camp guide said.

Since Iran's 1979 revolution, the country has been governed by religious leaders from the Shia branch of Islam. They instituted many strict religious laws, requiring women to wear headscarves and banning alcohol, for example. Buses have separate entrances for men and women, who are not allowed to stay in the same room without a marriage certificate. 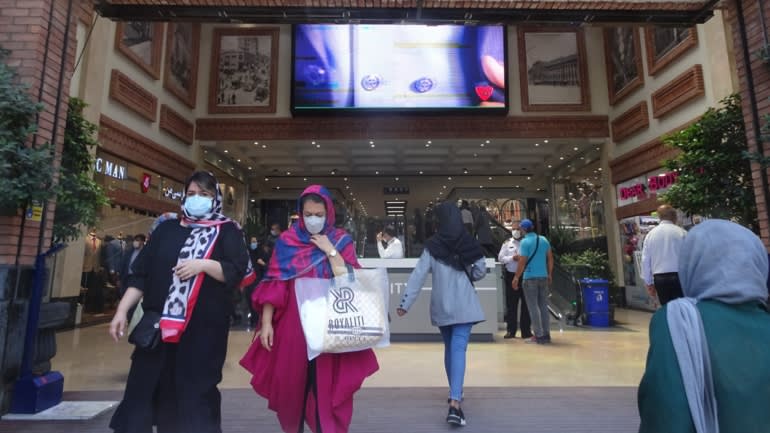 More than 30 years on from the Iranian Revolution, Iranian women enjoy fashion and shopping in Tehran on June 20. (Photo by Momoko Kidera)

But Iranians' revolutionary zeal has waned in the four decades since the clerics came to power. Headscarves have receded and become colorful. Women take them off when boarding international flights from Tehran.

Raisi will confront the changing attitudes of Iranian citizens as he seeks a more traditionalist path for his country.

Young people in Iran have it hard. With unemployment among people aged 24 and under running at 25%, many are unable to marry as they cannot afford to buy a house, or even pay for a wedding. Iran's currency, the rial, has plunged against the dollar by four-fifths over the past three years. The consumer price index jumped some 50% on the year between Feb. 20 and March 20. Consumers complain that food prices have more than doubled.

In mid-May there were widespread power outages lasting about two hours a day. The unexpected blackouts ahead of the peak summer demand was blamed electricity-hungry cryptocurrency mining.

Mining of virtual currencies is uneconomical for many companies in their home countries, given the huge electricity bills involved. But because electricity charges are low in Iran, many Chinese cryptocurrency miners have set up shop the country's industrial complexes.

Cryptocurrencies mined in Iran in January to April amounted to 4.5% of the global total, according to blockchain specialist Elliptic. The power outages brought on by this online activity took a toll on ordinary citizens.

Iran's leaders boast of the "resistance economy" and a "strategic alliance" with China. But the gambit has not paid off. Domestic industry remains stalled. Meanwhile, with Iran effectively cut off from the international financial system by U.S. sanctions, foreign companies are pulling out in droves. Schools for German and other foreign children in Tehran are struggling to keep their doors open as student numbers plunge. 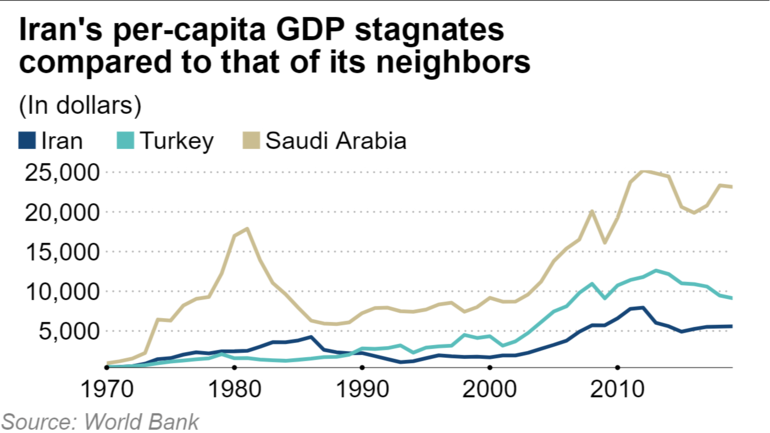 Iran's regional rival Saudi Arabia and other neighbors are trying to reduce their dependence on oil. As they work to make better use of their young people and women, they are wooing foreign businesses with deregulation. Turkey, whose population is similar to Iran's, has seen its economy grow rapidly over the past four decades despite lacking Iran's natural resources.

A 52-year-old carpenter named Mikael, who fought in the 1980-1988 Iran-Iraq war, lamented, "I cannot afford to buy even an apartment after working for more than 30 years. I fought for the regime that cannot realize such a dream and hope."

Raisi won last Friday's presidential election after other major moderates and reform-minded rivals were barred from running through preelection screening. In the end, there were five conservative hard-liners, one moderate and one reformist to choose from.

If hard-line leaders win control of all three branches of government, the policy of dialogue with the international community, carried out by Rouhani and Foreign Minister Mohammad Javad Zarif, is likely to be shelved.

Talks with the U.S. and other major powers aimed at salvaging the nuclear deal before the Iranian presidential election failed to bear fruit. If distrust toward Tehran rises in the U.S., even indirect communication with Joe Biden's administration will be blocked. 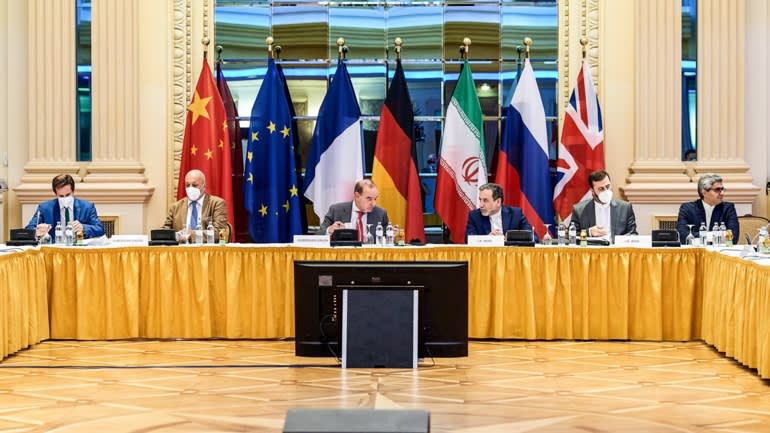 Talks aimed at reviving the Iran nuclear deal were held in Vienna on June 20, for the first time since Ebrahim Raisi's election. Their conclusion has been postponed.   © Reuters

Iranian Energy Minister Reza Ardakanian visited Russia in early June and reached a deal under which Moscow will lend Iran 1.2 billion euros ($1.42 billion) to build a power station in the southern city of Sirik. For the moment, foreign investment in Iran will likely come mainly from Chinese and Russian companies. U.S., European and Japanese companies have lost interest in Iran, which temporarily soared after the 2015 nuclear accord was agreed.

On the foreign policy front, Saudi Arabia severed ties with Iran 2016 as the two countries vied for regional dominance. The odds of improving the bilateral relationship are lengthening as back-channel talks Riyadh and Tehran that began in April have bogged down.

The civil war in Yemen has been the key issue in the negotiations. The conflict is a proxy war between Iran, which supports the Houthis, an armed Shia rebel group and Saudi Arabia, which backs the Sunni-dominated interim Yemeni government.

Hard-line leaders in Iran seek to increase the country's influence in the Middle East through proxy forces, as evidenced by its support for Hamas in its military clash with Israel in May. Hamas, an Islamist militant organization, rules in the Palestinian territory of Gaza.

Esmail Qaani, commander of the elite Quds Force of Iran's Islamic Revolutionary Guard Corps, reportedly praised Hamas rocket attacks on Israel as a "unique and successful answer" to Israel in a telephone conversation with the group's leader. Iran is thought to help Hamas make the rockets that it periodically fires from Gaza into Israel. Israel has refrained from fighting directly with its foe Iran, which would surely cause huge damage to both sides. But "gray zone warfare" through neighboring countries, which could lead to a direct conflict, is already a reality.

As the Biden administration scales back U.S. involvement in the Middle East, traditionally pro-U.S. countries in the region, such as Saudi Arabia and Israel, are keeping their distance from Washington. Under these circumstances, there is no country that can step in should the confrontation between the two big powers in the region become serious.

At a news conference on Monday following his election victory, Raisi said Iran would return to the nuclear agreement in exchange for the lifting of all U.S. sanctions. The U.S. is "committed" to the removal of all sanctions, Raisi said, stressing that Iran would not accept a mere easing. Rejecting direct negotiations with Washington, he made it clear that his stance would be tougher than that of Rouhani.

If Iran moves to arm itself with nuclear weapons in the wake of a collapsed deal, Saudi Arabia may follow suit. The nightmare scenario of a nuclear arms race in the unstable Mideast continues to loom.