TEHRAN -- Long-running efforts to revive the international deal to limit Iran's nuclear program are hanging in the balance after Russia's invasion of Ukraine threw up a new hitch.

On Monday, the U.S. State Department said that an agreement on the Joint Comprehensive Plan of Action (JCPOA) was neither imminent nor certain. Russia's ambassador to Iran said he hoped efforts would resume after the Nowruz Persian New Year holiday, which fell on the same day.

The cautious assessments highlight the hurdles that still face the yearlong talks to bring the U.S. back into an agreement then-President Donald Trump quit in 2018. Experts warn that time is running out to save the 2015 accord, since Iran has steadily upgraded its atomic program since 2019.

Earlier this month, Russia cast a fresh cloud over the JCPOA negotiations in Vienna by asking the U.S. for a guarantee that the sanctions imposed on Moscow over the Ukraine war would not have any impact on the agreement. Russia is one of the original parties to the Iran nuclear accord, along with Iran, the U.S., China, the European Union, Germany, France and the U.K.

Moscow's current position on the JCPOA remains unclear despite claims of progress in its dispute with Washington. Russian Foreign Minister Sergey Lavrov raised hopes on March 15 when he said that he had received a written pledge from the U.S. that sanctions imposed on Moscow over the Ukraine invasion would not affect trade with Iran.

But the U.S. State Department warned that it "would not allow Russia to use the deal as an "escape hatch" to evade Ukraine-related sanctions." It said only that it would not sanction "Russian participation in nuclear projects in Iran under a revived nuclear deal." 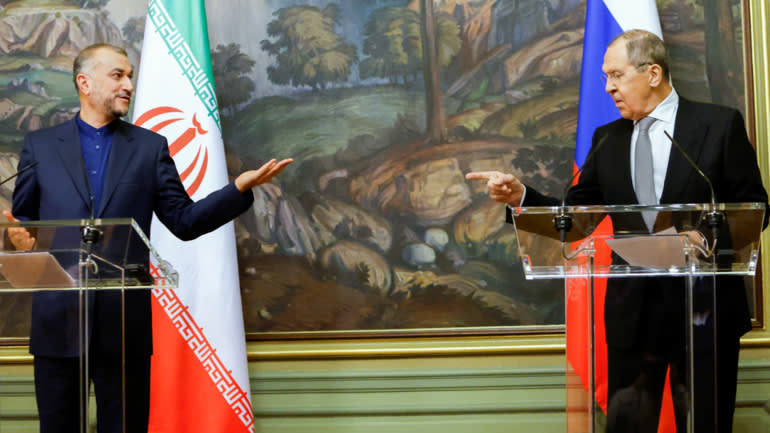 The JCPOA lifted sanctions against Iran, including those that have slashed its crucial oil sales, in exchange for curbs on its nuclear activities. Iran has breached many of those restrictions, including on enriching uranium toward weapons-grade purity, after the U.S. withdrew from the deal and imposed tough sanctions. Iran has always denied trying to build an atomic bomb.

Iran's status as an oil producer has further complicated the politics around the push to resuscitate the JCPOA. The Western-led sanctions imposed on Russia over the Ukraine invasion have driven a surge in crude prices. The rise extended on Tuesday after some EU members discussed a potential oil embargo on Russia. This is putting pressure on governments to seek alternative sources -- with Iran being one option.

Daniel Yergin, vice chairman of S&P Global and a leading authority on energy, told Nikkei in a recent interview that a nuclear deal with Iran would bring "a million barrels a day of oil into the market." Then U.S. President Donald Trump holds up a presidential memorandum he signed to pull out of the Iran nuclear deal in May 2018.   © EPA/Jiji

Trita Parsi, executive vice president at the Quincy Institute for Responsible Statecraft, told Nikkei Asia, that this calculus has given Moscow the ability to stall and even end the JCPOA, as both actions would be in its interest.

"Iran is stuck between two bad choices: Accepting the potential collapse of the deal and continued U.S. sanctions, or seeking a potential agreement with the U.S. outside of the JCPOA," Parsi said. He added that Iran might not want to depend on the U.S. at a time when Republicans have made it clear they would kill the JCPOA if they take the White House in 2024.

"Iran would then burn a bridge with Russia, with Moscow likely using the snapback on Iran at the U.N. Security Council. Iran would have to weigh the benefit of a deal with the U.S. for three years versus 20 years of enmity with Russia," Parsi said.

"Negotiations are not over yet and there are some important issues that Westerners must accept," Mohammad Marandi, a political analyst and a member of Iran's negotiating team, told Nikkei Asia. "The priority [for Iran] is to conclude the talks, but in addition to that, Iran seeks to resolve the issue between Russia and the United States." British-Iranian dual nationals, Nazanin Zaghari-Ratcliffe and Anoosheh Ashoori, were released from custody in Iran and returned to the U.K. on March 17 after years of imprisonment.   © Reuters

A source close to the Iranian negotiation team in Vienna, who asked not to be named because of the sensitivity of the situation, told Nikkei that an important oil deal was concluded when Iran's foreign minister was in Moscow in mid-March. Under the arrangement, the person said, Iran gave Russia a guarantee that it would seek a mechanism to prevent an oil price drop when Iran returns to the global market. The National Iranian Oil Company announced an oil price increase last Wednesday.

Alireza Peyman-Pak, the head of the Iran's Trade Promotion Organization and 20-year veteran of sanctions management, told Nikkei that Iran and Russia are complementary economies.

"We have found businesses in Russia's private sector and connected them to the businesses in private sector here," Peyman-Pak said. "This is not a Russian-American issue. It is an issue of an independent trade against Western-affiliated trade, and both are good for Iran. We are now in a win-win game."

In one positive sign for the mood of the JCPOA talks, two British-Iranian dual citizens, Nazanin Zaghari-Ratcliffe and Anoosheh Ashoori, were released from Iranian custody last week. Zaghari-Ratcliffe was arrested in 2016 and Ashoori the following year while they were on holiday in Iran and held on spying charges.

Their freedom came after London repaid a pre-1979 Islamic Revolution debt of 400 million pounds ($526 million). Tehran denies that the payment had any connection to the prisoners being released.