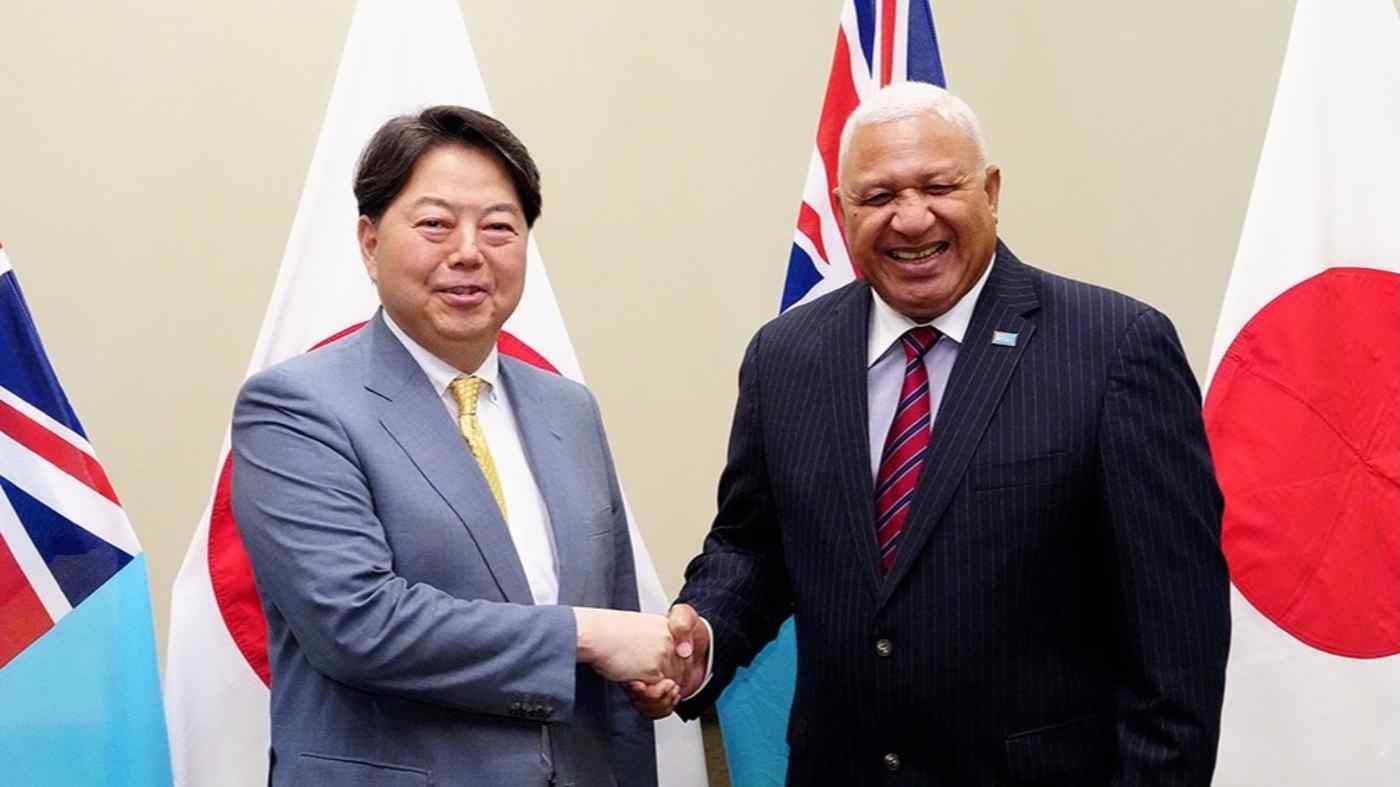 Japanese Foreign Minister Yoshimasa Hayashi, left, and Fijian Prime Minister Voreqe Bainimarama, who doubles as foreign minister, confirm that they will continue closely cooperating for peace and stability in the Pacific region, at a meeting in the Fijian capital Suva May 7. (Photo courtesy of Japan's Ministry of Foreign Affairs)
May 7, 2022 20:16 JST | Japan
CopyCopied

TOKYO (Kyodo) -- Japan and Fiji confirmed Saturday they will continue closely cooperating for peace and stability in the Pacific region as they shared concerns over a recent security deal between China and the Solomon Islands, the Japanese government said.

At a meeting in the Fijian capital Suva, Japanese Foreign Minister Yoshimasa Hayashi and Fijian Prime Minister Voreqe Bainimarama, who doubles as foreign minister, affirmed the goal of realizing a "free and open Indo-Pacific," amid China's increasing military and economic clout in the region.

Hayashi also strongly condemned Russia's military aggression in Ukraine, saying it shakes the foundation of the international order and that it is important for countries that share basic values to unite, the Japanese Foreign Ministry said in a statement.

Hayashi's three-day trip through Sunday to the Pacific islands of Fiji and Palau came after China said last month it signed a security pact with the Solomon Islands in the southwestern Pacific, fueling concern over an increase in Beijing's military influence in the region.

The agreement between China and the Solomon Islands reportedly allows Beijing to deploy forces and dock vessels in the islands, although the details remain unclear.

Later in the day, Hayashi met with Henry Puna, secretary general of the Pacific Islands Forum and a former Cook Islands prime minister, in Suva. Fiji is the current chair of the 18-member regional body.

On Sunday, Hayashi is scheduled to hold talks with political leaders in Palau.