Japan, New Zealand in talks to share information and intelligence 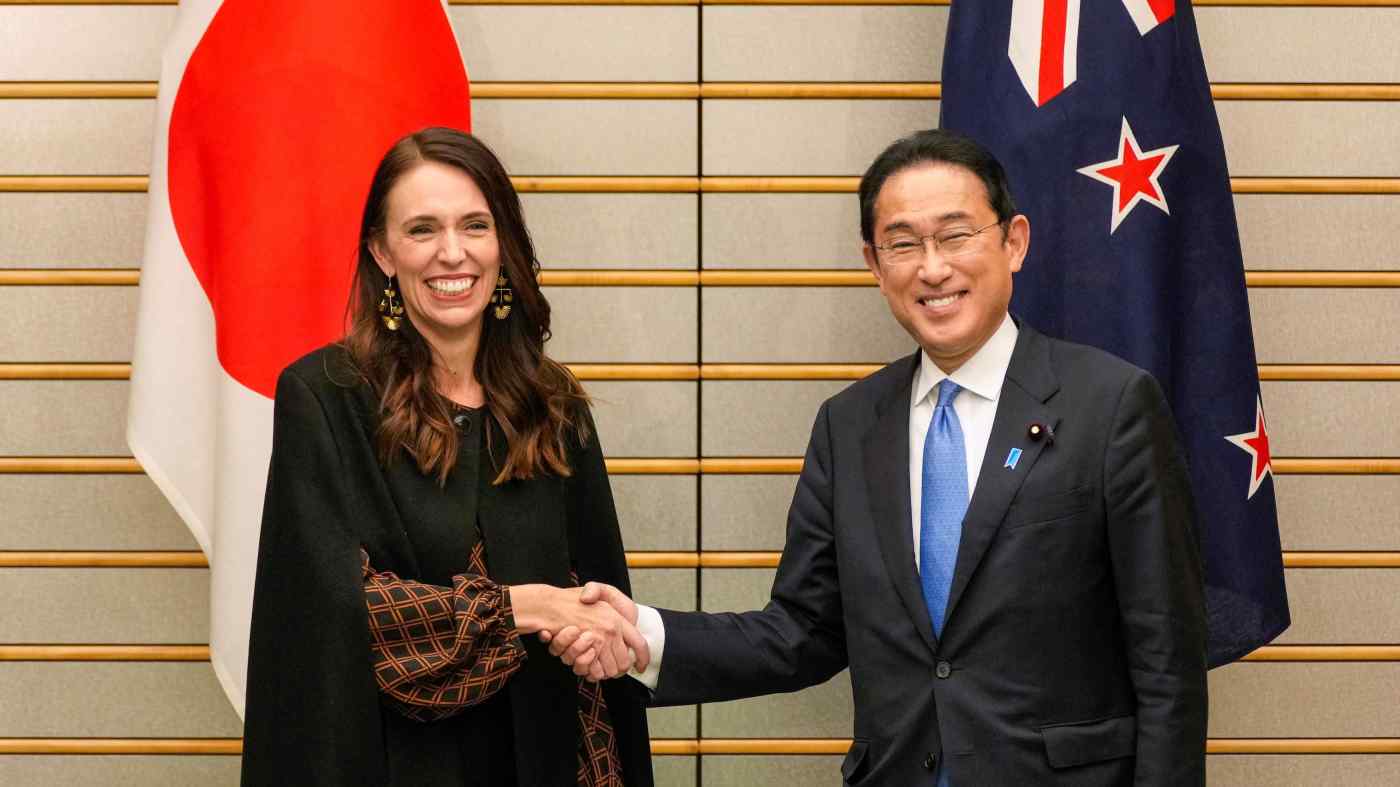 TOKYO -- Japan's Prime Minister Fumio Kishida and New Zealand's Prime Minister Jacinda Ardern met late on Thursday and agreed to start negotiations on an information-sharing agreement, including the exchange of intelligence, as they strengthen security and defense cooperation.

The two leaders also reaffirmed the importance of the Comprehensive and Progressive Agreement for the Trans-Pacific Partnership (CPTPP) and said they would cooperate in researching renewables such as hydrogen and geothermal energy.

Speaking at a separate event in Tokyo, Ardern said New Zealand is "absolutely committed to closer renewable energy cooperation with Japan, particularly in hydrogen and geothermal energy," giving examples of Japanese companies active in those areas in her country.

The event was hosted by the New Zealand government to promote the two nations' cooperation in renewable energy. Minister for Trade and Export Growth Damien O'Connor, along with business leaders from New Zealand and Japan involved in the sector, were in attendance.

On geothermal energy, Ardern stressed that cross-border business cooperation is "necessary, because each of us has big plans," referring to New Zealand's goal of reaching 100% renewable energy generation by 2030, and Japan's target of tripling its geothermal power generation by that year.

During the event, New Zealand geological surveying company GNS Science announced that it will be opening an office in Tokyo, together with geothermal power company Geo40, to seek geothermal business opportunities. Ian Simpson, chief executive of GNS Science, pointed out that the two nations shared geological similarities favorable to geothermal energy, as well as goals to create zero-carbon economies. "We have the perfect opportunity to move forward together and keep a common focus on renewable energy generation," Simpson said. Ardern's visit to Japan is part of her government's effort to rebuild New Zealand's COVID-hit economy by strengthening ties with Singapore and Japan, two of the country's largest trading partners. Deepening cooperation in the renewable energy sector is a main element of this effort, especially as the recent Ukraine crisis has sent the price of oil sharply higher and made energy security an urgent matter for many countries.

Before arriving in Japan, Ardern spent three days in Singapore, where she met with Prime Minister Lee Hsien Loong. In a joint statement, the two leaders agreed to add a new pillar called "climate change and green economy" to their cooperative framework. This includes initiatives to develop technology to support the energy transition and sustainable aviation.

Ardern is scheduled to stay in Japan until Saturday. For Japan and New Zealand, strengthening their partnership is becoming more important as China steps up its presence in the region.

Japan's Chief Cabinet Secretary Hirokazu Matsuno underlined at a news conference on Tuesday that New Zealand is "a strategic partner that shares [Japan's] basic values on freedom, democracy, the rule of law and human rights."

Through Ardern's visit, he said, Japan will strengthen cooperation with New Zealand in areas such as security and the economy, and aim to create a "free and open Indo-Pacific."