Japan, US and Australia push back on China's South Pacific expansion TOKYO -- A war of nerves involving Japan, the U.S., Australia and China is underway over island nations in the South Pacific Ocean such as Palau, Fiji and the Cook Islands, with attention focused on crucial sea lanes in the region.

The Japanese government compiled a report on the South Pacific on May 17, affirming its targets of "maintaining and promoting environments for realizing a free and open Indo-Pacific" and "ensuring the stability and safety of the region."

"Free and open Indo-Pacific," an expression frequently used by Japanese Prime Minister Shinzo Abe, generally means the security of ocean routes from the Indian Ocean to the Pacific through Southeast Asia. Stressing the importance of the rule of law and freedom of navigation, the expression is aimed to check China which is expanding its presence in the area.

China is sparking conflicts with countries around the South China Sea as it builds artificial islands there as military outposts. The Japanese government's report adopts the same expression out of concern that China may resort to the same strategy in the South Pacific.

China envisions a line of defense from Japan's southern Ogasawara Islands to Papua New Guinea via Guam and Saipan as its "second island chain" strategy. An advisory organ to the U.S. Congress said in a report last year that China is capable of rivaling the U.S. in air, sea and ground forces in the island chain. In fact, China is expanding its military influence to the South Pacific.

In Vanuatu, China has been building a large port since late 2017 reportedly for use by the Chinese navy, although the two countries deny the report. Japanese government officials warn that China will be able to monitor the movements of U.S. and Australian naval ships in the South Pacific if it secures a military base in Vanuatu. 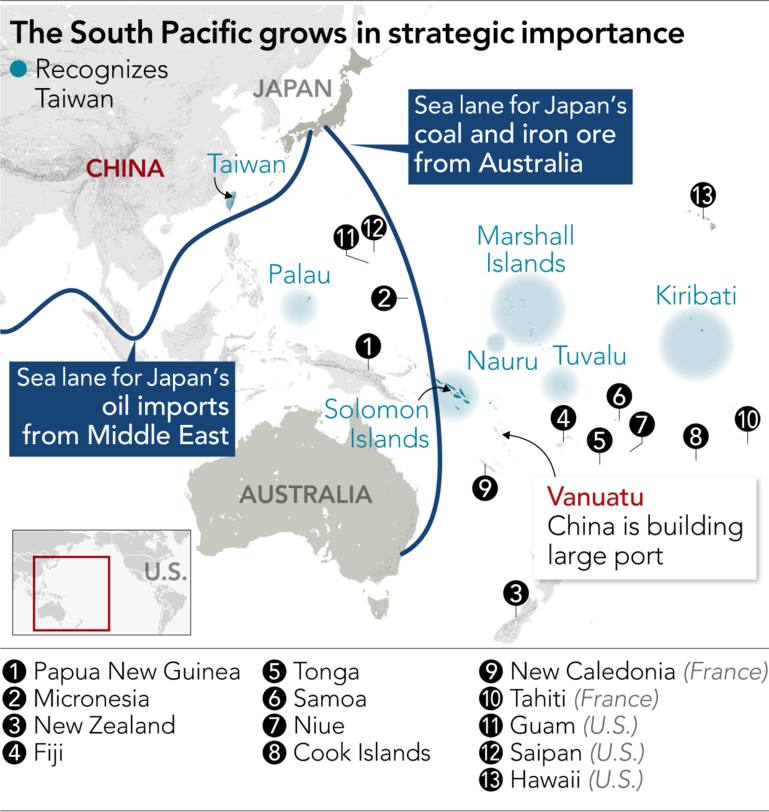 China has achieved a huge financial presence as well. The Lowy Institute, an Australian think tank, said China's financial assistance to Pacific nations from 2006 to 2016 totaled $1.8 billion, 1.5 times Japan's and close to the $1.9 billion provided by the U.S. As with Beijing's "Belt and Road" global development strategy, Chinese money is starting to sweep the region.

One matter of grave concern is the sea lanes connecting Japan with Australia and other countries in the South Pacific. Japan relies on Australia for 70% and 60% of coal and iron ore imports, respectively. China's maritime expansion may affect Japan's lifeline in the South China Sea, through which it imports oil from the Middle East.

Countries concerned are paying attention to elections to be held in island countries in the South Pacific. While they include six countries that recognize Taiwan as a nation, five of them will hold elections by next year.

"If China pulls strings, there will be good chances that governments friendly to it will be established," said Takehiro Kurosaki, a junior associate professor at Tokai University. The prime minister of the Solomon Islands Manasseh Sogavare said the South Pacific nation will review its diplomatic relationship with Taiwan.(Photo by Fumi Matsumoto)

Japan, the U.S. and Australia are working hard to retain South Pacific nations in their camp. At a meeting with Thomas Remengesau Jr., president of the Republic of Palau, in March, Abe declared Japan's economic assistance to the island country as part of its efforts to establish a "free and open Indo-Pacific."

Kentaro Sonoura, a special adviser to Abe, visited Samoa and Fiji in June, marking his fifth trip to the South Pacific since he took his current post in 2017. Norikazu Suzuki, parliamentary vice minister for foreign affairs, attended a meeting between Japan and three Micronesian countries -- Palau, the Republic of the Marshal Islands and the Federated States of Micronesia -- held in Palau in February and pledged Japan's assistance totaling 3.4 billion yen ($31.51 million). Leaders of the Micronesian countries were reported expressing their strong support for the free and open Indo-Pacific.

South Pacific countries, like those in the Indian Ocean and Southeast Asia, are starting to recognize problems posed by China's expanding presence as a result of Japan's approach to them.

U.S. President Donald Trump and leaders of the three Micronesian countries met at the White House on May 21 and said in a joint statement, "It is in our mutual interest that the Pacific Ocean remains an important and vibrant corridor for maritime trade."

The U.S. government treated the Micronesian leaders exceptionally well as it also arranged their meeting with Sectary of State Mike Pompeo, who is a hard-liner regarding China.

Australia has established a fund worth 200 billion yen to support South Pacific countries under its "step-up policy," while New Zealand has adopted a "Pacific Reset" policy, including a 30% increase in official development assistance for the countries, to reinforce its relations with them.

France is also joining them as President Emmanuel Macron visited New Caledonia, a French territory in the South Pacific, in May last year to stress the strategic importance of the region. At a meeting with Abe on Wednesday, Macron emphasized that France as a "major Indo-Pacific nation" will strengthen its support for maritime infrastructure improvements and combat global warming in cooperation with Japan.

The South Pacific has been under the strong influence of the U.S. since the Pacific War and maintained strong ties with Japan, the U.S. and Australia. Diplomatic war, triggered by China's offensive, is starting in the region.