Japan and China lock horns in the East China Sea TOKYO -- A Chinese marine research vessel in July twice strayed into what Japan considers its exclusive economic zone without giving advanced notice as Tokyo says is required by international law. The intrusions came in the East China Sea, where EEZs overlap and official boundaries have yet to be set.

China has been ratcheting up similar activities in the body of water since 2010 but has recently become more aggressive. The incidents are viewed in some quarters as acts of coercion designed to alter the status quo in Northeast Asia.

On July 25, 120 km off the Danjo Islands of Nagasaki Prefecture, western Japan, a Japan Coast Guard patrol vessel warned a Chinese vessel that no research is allowed without prior consent in Japan's EEZ.

It was the fourth time since the beginning of the year for Chinese vessels to intrude into Japan's EEZ. Chinese ships also entered Japanese waters four times last year.

Article 246 of the U.N. Convention on the Law of the Sea states, "Marine scientific research in the exclusive economic zone and on the continental shelf shall be conducted with the consent of the coastal State." Japan's Coast Guard can order a vessel to stop if it detects any unauthorized research, but the convention lacks provisions regarding countermeasures that can be taken should violators refuse to heed such an order.

Japan has one choice: to lodge a protest through diplomatic channels.

The Chinese vessels are thought to be gathering data on seabed geology, mainly west of the Okinawa Trough. 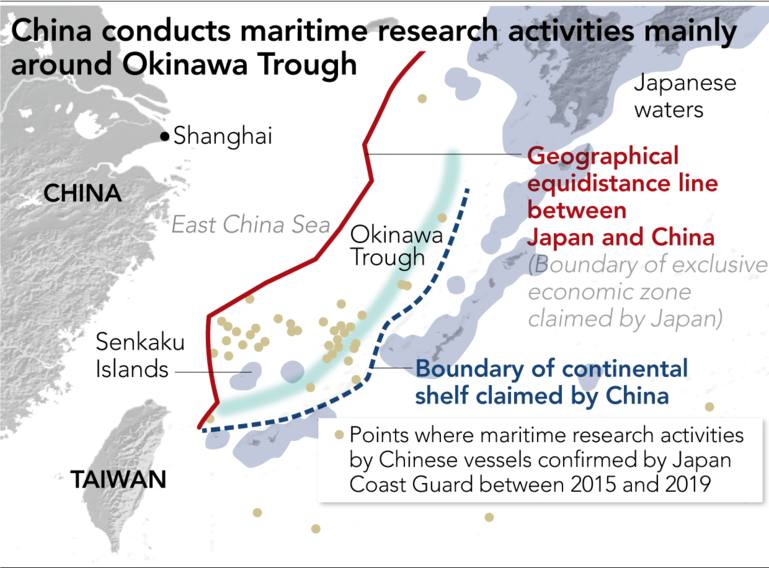 The intrusions have been ratcheting up since 2010. That year, a Chinese fishing boat rammed a Japan Coast Guard vessel near the Senkaku Islands, Okinawa Prefecture. Another trigger came in 2012, when Japan nationalized the same islets. The intrusions also increased immediately after Russia used its military to annex the Crimean Peninsula in 2014 -- the first use of force to alter the global status quo since World War II.

The convention specifies that EEZs shall not extend beyond 200 nautical miles "from the baselines from which the breadth of the territorial sea is measured." But the East China Sea is less than 400 nautical miles wide, and the EEZs of Japan and China overlap in the area.

Japan maintains that the equidistant "median line" is the boundary and China is obliged to notify Japan in advance if it wishes to conduct research on the Japan side of this median line.

China argues that the Okinawa Trough is its continental shelf, far beyond the median line, and thus it has a right to develop undersea resources in the area.

China's EEZ claim in the East China Sea rests on this provision. The issue was discussed on August 20, when the countries' foreign ministers met in Beijing.

The convention specifies that the delimitation of a continental shelf and exclusive economic zone between states with opposite or adjacent coasts shall be set by agreement on the basis of international law, as referred to in Article 38 of the Statute of the International Court of Justice, "in order to achieve an equitable solution." 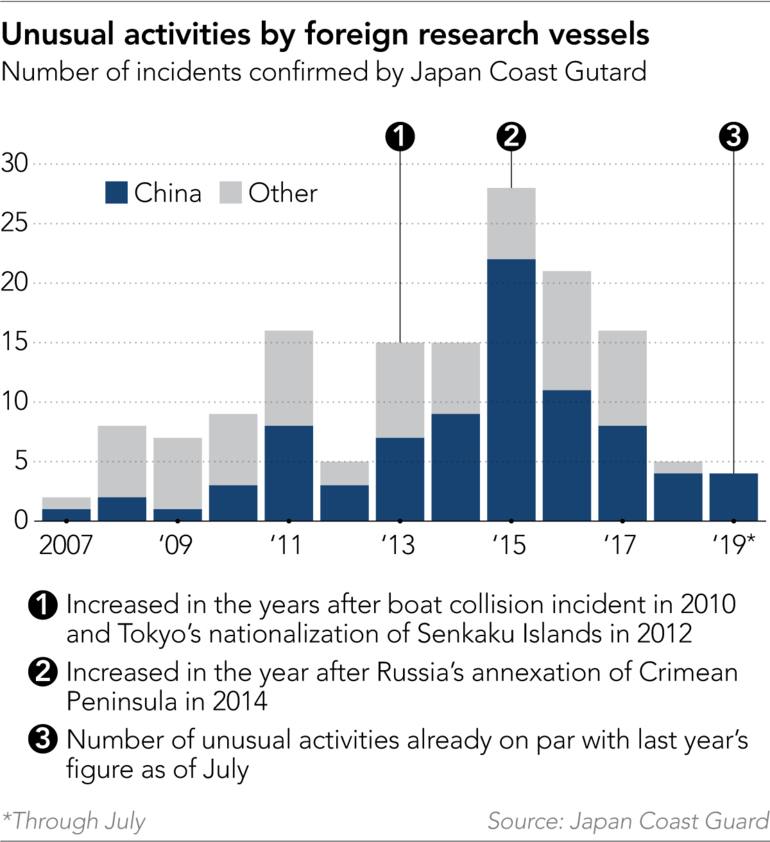 In a similar case, the ICJ in 1969 determined the boundary of the North Sea continental shelf. And in 1985 it settled a dispute between Libya and Malta based on the concept of a median line. Japan says recent ICJ rulings follow this 1985 judgment.

The court of arbitration and other international courts will take up cases without both disputants' consent, but their rulings come with no guarantee that they will be carried out. China, for example, rejected a Hague tribunal's 2016 ruling regarding a South China Sea dispute brought by the Philippines.

The U.N. Commission on the Limits of the continental shelf is in a position to recognize the outer limits of a continental shelf beyond 200 nautical miles of a coast. Although China in 2012 filed for expanding its continental shelf close to the Okinawa Trough, the commission has yet to start examining the application due to Japan's objection.

Observers say China is conducting marine research to make its claims a fait accompli. China also might be gathering geological data that it believes will support its position in case the commission does take up the matter.

"Justice does not always prevail in the world of international law," said Yoshihiko Yamada, a professor at Tokai University in Tokyo. If it is to prevail in this matter, Yamada said, "Japan should obtain the understanding of more countries through support of their oceanic policies."