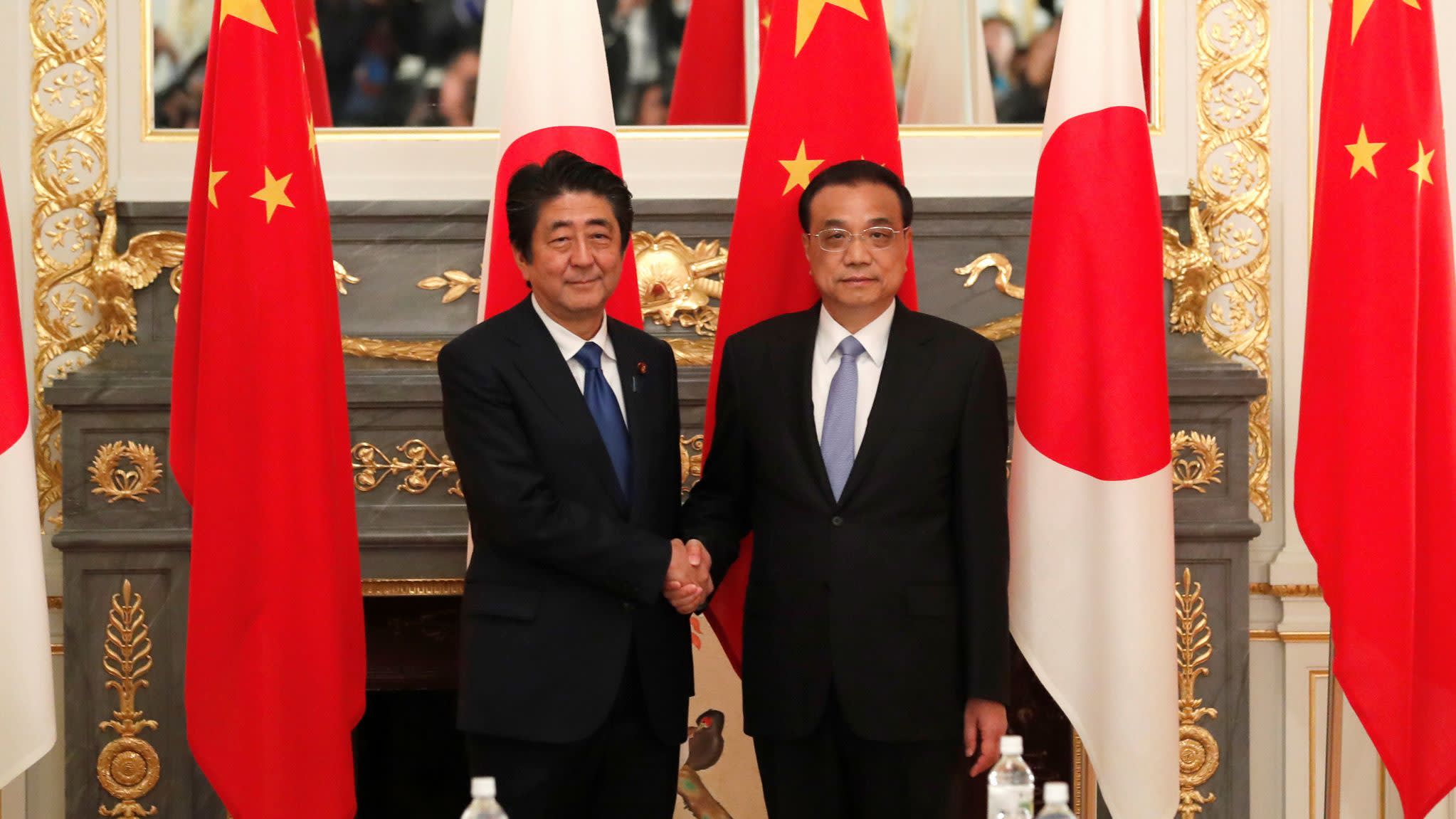 Chinese Premier Li Keqiang, right, visited Tokyo in May where he agreed with Prime Minister Shinzo Abe to cooperate on investment in infrastructure projects overseas.   © Reuters

TOKYO -- Japan and China are moving ahead with their plans to cooperate on overseas infrastructure projects, with a newly established public-private committee scheduled to hold its first meeting in late September in Beijing.

A high-speed rail project in Thailand is seen as the first candidate for cooperation.

Japanese Prime Minister Shinzo Abe and Chinese Premier Li Keqiang met in Tokyo in May and agreed to cooperate on infrastructure projects in third countries. Abe is considering visiting China in October and seeks to reach agreements on specific projects there.

Japan aims to avoid excessive competition with China on infrastructure projects by collaborating. Showing support for Beijing's Belt and Road Initiative could also lead to better bilateral ties. China, for its part, seeks to avoid being labeled overseas as a disreputable investor by bringing Japan on board.

The public-private committee's first meeting will be led by Hiroto Izumi, special adviser to the prime minister, from Japan, as well as Gao Yan, a vice minister of commerce, and Ning Jizhe, a vice chairman of the National Development and Reform Commission, from China. Senior officials from Japan's top business lobby, Keidanren, will also participate.

The committee discussion will form the basis for a high-level bilateral forum on cooperation to take place when Abe visits China. Tokyo and Beijing are planning to sign memorandums of understanding on 20 to 30 projects then.

The high-speed rail project aimed at connecting Thailand's three main airports is seen as the likely candidate for their first collaboration. The project is central to the country's eastern economic corridor development plan and is expected to cost over $45 billion. A subcommittee will be created under the new committee to draft a concrete plan, with Beijing and Tokyo aiming to participate in an international auction to be held as early as the end of this year.

Japan and China will also consider partnerships between their companies for solar power orders from overseas and delivering power plants to other countries through Sino-Japanese joint ventures. Tokyo and Beijing will also explore cooperation in such fields as finance, health care and startup funding.

The two countries are increasingly competing to finance Asia's demand for infrastructure, which the Asian Development Bank estimates at $26 trillion from 2016 to 2030.

Excessive competition, however, could hurt both sides. Countries can try to play Japan and China off each other to extract better terms, such as lower interest rates. Beijing is particularly susceptible to this, since its priorities are thought to lie in securing orders for Chinese companies and expanding its political influence.

The $200 million China-Maldives Friendship Bridge, for instance, was mostly funded by Chinese money and built by Chinese companies. Profitability has been an afterthought, as Maldives President Abdulla Yameen seeks to tout successes ahead of a presidential election in September and China aims to bolster its sway over the geopolitically significant island nation.

Japan and China are expanding their power struggle in the Asia-Pacific region on both the economic and security fronts. Tokyo has promoted its Free and Open Indo-Pacific Strategy in response to Beijing's Belt and Road Initiative as the two continue their geopolitical battle.

It remains to be seen whether their collaboration is more than temporary, since their joint effort on infrastructure is aimed at improving relations ahead of their leaders' reciprocal visits this year and next.

China's trade war with the U.S. seems to have nudged Beijing toward cooperation with Japan. If China's standing in the international community changes, it could again move to reassess the bilateral partnership.