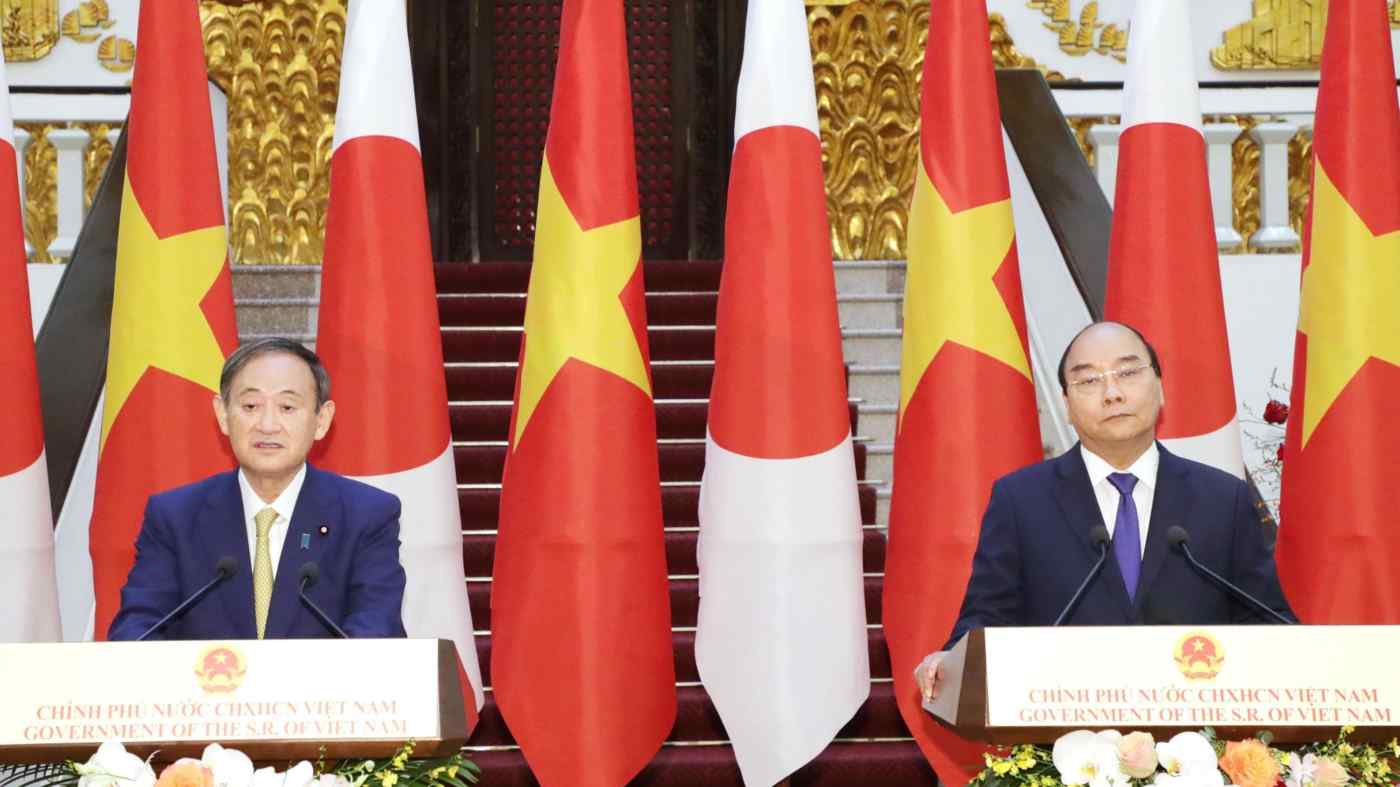 HANOI -- Japanese Prime Minister Yoshihide Suga, visiting Vietnam for the first time since becoming prime minister in September, held talks with Prime Minister Nguyen Xuan Phuc on Monday, agreeing to accelerate the reopening of borders for business travelers as the nations put the COVID crisis behind them.

In July, Vietnam and Japan reached an agreement to resume business travel for the other's expatriates and long-term residents in each country. On Monday the leaders agreed to include short-term business travelers and to resume two-way passenger flights.

The prime ministers also agreed to cooperate on the "free and open Indo-Pacific" initiative, apparently taking into consideration China's growing presence in the East China and South China seas.

Suga is the first foreign leader of major economies visiting Vietnam since the start of the coronavirus pandemic. Hanoi seeks stronger economic and defense ties with Japan as a counterbalance to China's growing influence in the region, where Vietnam is a leading critical voice against Beijing's encroachments.

The Japanese leader's trip is likely to accelerate advanced economies' plays for greater business with Vietnam, which has a new trade deal with the European Union and is negotiating a separate one with the U.K. The U.S. is also showing interest as a partner.

A spokesperson for Vietnam's foreign ministry welcomed that Suga chose the country for his first overseas trip since becoming prime minister in September.

Suga on Monday also met with Communist Party chief Nguyen Phu Trong, the country's president and de facto top leader. Suga and his entourage are expected to have a more limited itinerary than past Japanese leaders, owing to coronavirus-related restrictions.

High on Hanoi's agenda for the visit is securing greater economic cooperation. While Vietnam has succeeded in containing COVID-19 infections better than any other Southeast Asian nation, its export-driven economy has not been spared the impact of the pandemic. Real gross domestic product growth will slow to 1.6% this year from more than 7% in the preceding two years, according to an International Monetary Fund forecast.

Japan ranks second to South Korea as a source of Vietnam's FDI on a cumulative basis in 2019. It is also the country's fourth-largest trade partner, after China, the U.S., and South Korea. Both countries belong to the Trans-Pacific Partnership trade pact. The two nations also have deepening ties between their peoples, with more than 400,000 Vietnamese living in Japan.

Manufacturers have led Japanese investment in Vietnam so far, attracted by wages that are lower than in China. But rising income levels have opened up opportunities for service-sector companies to capture consumer demand in a country where a young population promises long-term growth potential.

Vietnam's GDP per capita has topped the $3,000 threshold at which retailers typical move to expand their presence. Among Japanese players, casualwear chain Uniqlo opened its first location here last December and is adding more. Drugstore operator Matsumotokiyoshi Holdings will make its debut in Ho Chi Minh City on Sunday. One hurdle to expanding bilateral business is travel restrictions. While Tokyo and Hanoi have agreed to reopen in stages, Japanese business travelers are still required to self-quarantine for 14 days after arrival in Vietnam. Attention is on the prospects for a deal that lays out specific steps forward, such as shortening the isolation period.

"Short trips are basically a non-starter under the circumstances," an executive at a Japanese trading company said. "This has become an obstacle to doing business."

But more is at stake than economic ties between the two countries.

Japan and Vietnam seek to conclude an agreement to start Japanese defense exports. As China expands its military presence in the South China Sea, Tokyo sees Hanoi as a partner alongside India for strengthening defense capabilities in the Indo-Pacific region.

The countries have substantially reached an agreement on the export of defense equipment from Japan to Vietnam, Tokyo said on Monday.

Most of Vietnam's weapons have come from Russia, a legacy of Soviet-era arms procurement. For Hanoi, Japan represents an option for diversifying its suppliers from the standpoints of costs and defense strategy.

Speaking in Tokyo on Friday, Suga said he wants his trip to Southeast Asia "to show our nation and the world that Japan will play a leading role in the region's peace and prosperity." Suga's predecessor, Shinzo Abe, also made Vietnam his first stop after becoming prime minister for a second time in 2012.

After Vietnam, Suga will travel to Indonesia, where he will meet President Joko Widodo on Tuesday.