TOKYO -- The Japanese government officially announced on Wednesday to withdraw from the International Whaling Commission, a move that drew criticism from a global community worried about depleted whale populations.

The withdrawal enables Japan to pursue commercial whaling in its adjacent waters, including its Exclusive Economic Zone.

Japan will resume commercial whaling in July 2019, Chief Cabinet Secretary Yoshihide Suga announced on Wednesday. The whaling area is to be confined to Japanese waters and the EEZ, and will not include the Antarctic Ocean or the Southern Hemisphere, he said.

"The purpose of the orderly development of the whaling industry, as stated in the [IWC] convention, was not reflected [in the commission], and it became apparent that there is no possibility for differing opinions and positions regarding whales to coexist," Suga said in published remarks. "As a result, [the government] came to this decision."

Regarding the pullout, the remarks said: "Our country's position of cooperating in the international management of marine biological resources will not change." Japan will "contribute to management of whale stocks based on scientific knowledge, and work with international institutions," it said, and remain an IWC observer state.

The decision was made at a cabinet meeting on Tuesday. Japan needs to inform the IWC by Jan. 1 if it wishes to leave the group at the end of June. When asked by the media about the need for an alternative framework to that of the IWC for commercial whaling, Suga said that he would like to "consider creating a new international framework in the future."

He noted that the Japanese government has exited from about 20 international institutions in the past, with the most recent being withdrawal from the Common Fund for Commodities in 2012.

Japan's announcement sparked international outcry from governments and organizations. Australia released a statement on Wednesday saying that it "urges Japan to return to the Convention and Commission as a matter of priority."

New Zealand offered a similar sentiment, with foreign affairs minister Winston Peters saying, "While we seriously welcome the announcement that Japan will cease whaling in the Southern Ocean, we are disappointed it is leaving the Commission." 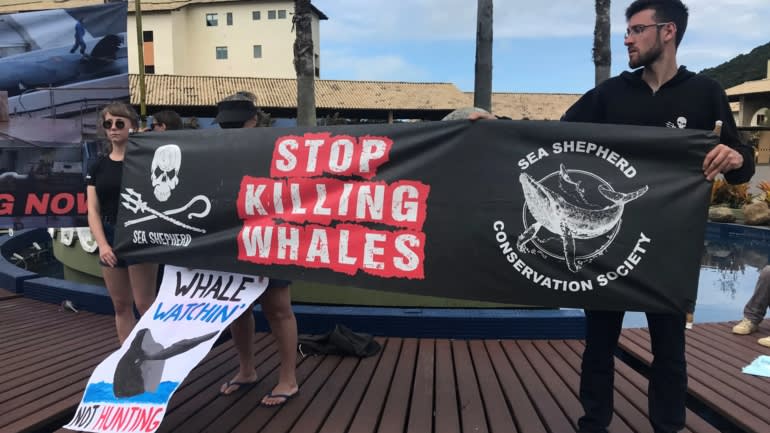 Greenpeace Japan's Executive Director Sam Annesley said in a statement that "as the chair of the G-20 in 2019, the Japanese government needs to recommit to the IWC and prioritize new measures for marine conservation."

But some in Japan have different views. Mayor Kazutaka Sangen of Taiji in Wakayama Prefecture -- known as the birthplace of traditional whaling -- praised the government's move. It was a "big decision to protect Japanese fishermen who make their living out of whaling," he was quoted as saying by Kyodo.

A 66-year-old man who process whale meat in Taiji said, "Stocks [of meat] will become stable once commercial whaling is resumed." He said that he rarely had enough meat on hand when scientific whaling was obstructed.

Some residents in the town expressed worries about protests by anti-whaling organizations. When anti-whaling protests peaked in 2013, about 200 activists descended upon Taiji, according to the police.

The IWC was established in 1948 for "conservation of whale stocks" and "the orderly development of the whaling industry." The commission has 89 member governments, with Japan joining in 1951.

The group instituted a moratorium on commercial whaling in 1982. Japan initially opposed the freeze but then began complying in 1988, when the country's whalers were able to continue whaling, ostensibly for "scientific" purposes.

Species such as the minke whale are protected by the IWC, but since these species are not endangered, Tokyo wants to hunt them.

Leaving the IWC allows Japan to pursue commercial whaling for the first time in 30 years. At the same time, the country can no longer undertake "scientific" whaling in the Antarctic Ocean under international law.

Japan has long been proposing sustainable use of whale stocks based on scientific data, just like other marine resources such as tuna. It faced strong opposition from Australia and other anti-whaling countries, but discussions to resolve the issue stalled.

In its annual meeting in Brazil in September, the IWC rejected Japan's proposal to resume commercial whaling of relatively abundant species. Seven of 13 great whale species are endangered or vulnerable, according to the World Wildlife Fund.

For the IWC to set a catch quota or establish a sanctuary, three-fourths of its members must vote to do so. But anti-whaling countries have declared they will not allow any form of whaling.

Masaaki Taniai, vice minister for the Ministry of Agriculture, Forestry and Fisheries, told the meeting after the vote that Tokyo had no choice but to "examine all possible options," including withdrawal. Members of the leading Liberal Democratic Party were also requesting the government to pull out of the IWC.

Japan's demand for whale meat is uncertain. The country used to consume 200,000 tons per year, but the figure has sat between 3,000 tons to 5,000 tons in the past few years, according to the government.