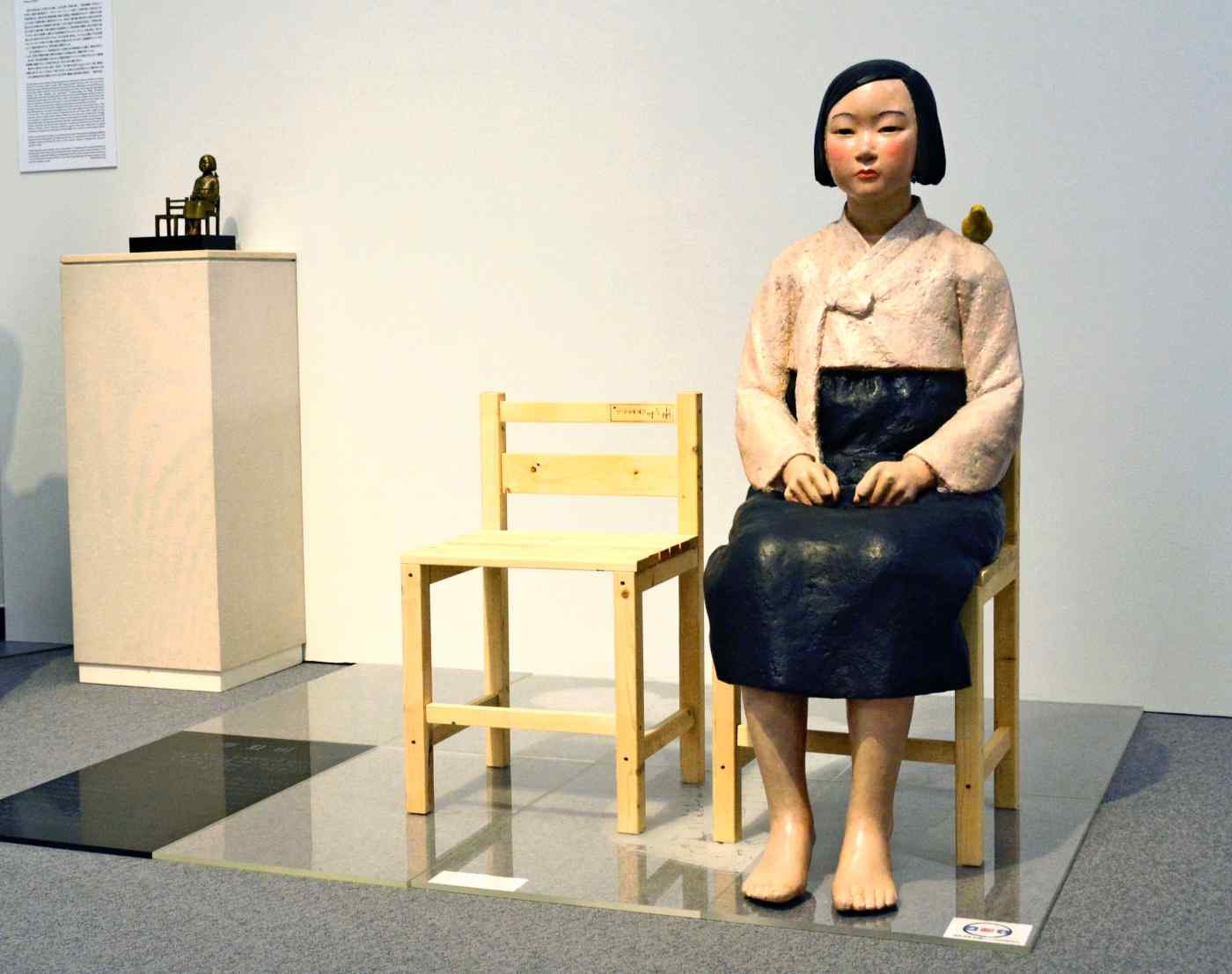 NAGOYA (Kyodo) -- A major art festival in central Japan shut down Saturday one of its exhibits featuring a statue symbolizing "comfort women," who were forced to work in wartime Japanese military brothels, following a flurry of protests, the organizer said.

The decision came just three days after the opening of the 75-day festival at a time when tensions between Japan and South Korea have been escalating over wartime history and trade policy. The shutdown has also sparked controversy over freedom of expression.

Aichi Gov. Hideaki Omura, who heads the organizing committee, told a press conference that there are growing worries about safely managing the Aichi Triennale 2019 as it has received a number of threatening emails, phone calls and faxes.

One of the faxes it accepted read, "I will bring a gasoline container to the museum," which drew associations with the recent deadly arson attack on a Kyoto Animation Co. studio, according to Omura.

The statue of the girl, sculpted by a South Korean husband-and-wife team, is one of the exhibits in the art festival's section titled "After 'Freedom of Expression?'" Most of the artwork on display in the section could not be displayed in Japan in the past "due to censorship or self-censorship," the exhibitor said.

The organizer of one of the biggest contemporary art festivals in Japan, drawing more than 90 teams of artists from around the world, decided to close the section completely.

Journalist Daisuke Tsuda, who is the artistic director of the triennial festival, said, "It is regrettable that we have made an example that undermines freedom of expression."

"It is historic outrage," a group of individuals that produced "After 'Freedom of Expression?'" said in a statement in response to the organizing committee's decision. "This will be the worst censorship incident in Japan's postwar period."

The group said it is considering taking legal action.

Japan-South Korea relations have long been frayed over historical issues stemming from Japan's colonial rule of the Korean Peninsula between 1910 and 1945.

The dispute over "comfort women" -- a euphemism used in referring to those recruited mostly from other Asian countries to provide sex to Japanese soldiers during World War II -- has been a major sticking point.

Now the thorny historical issues have spilled over into the economic realm, and bilateral ties have fallen to arguably the lowest level since they were normalized in 1965.

On Friday, Japan decided to revoke, starting later this month, South Korea's preferential status as a trade partner for the purchase of goods that can be diverted for military use, citing security reasons.