Japan embarks on joint military maneuvers with US, France, Australia 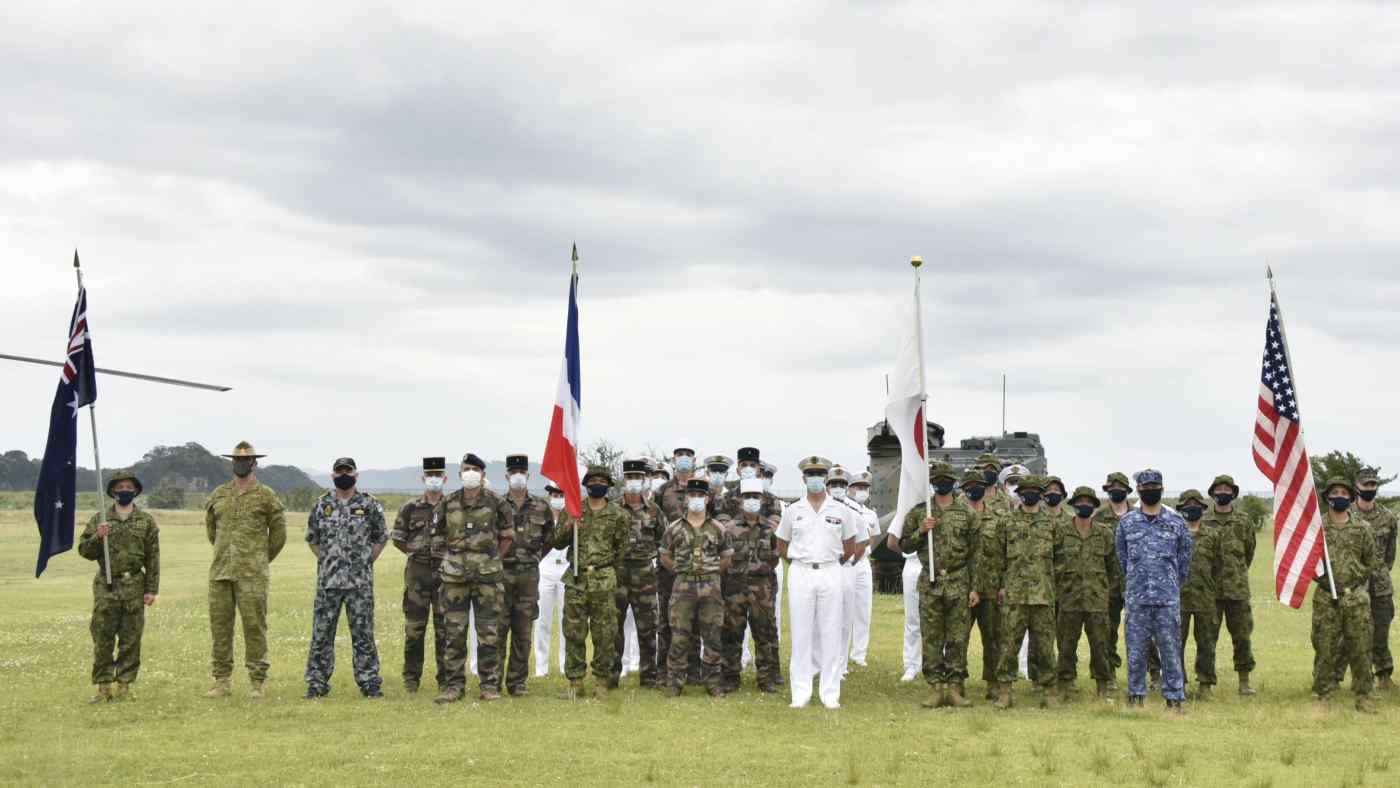 TOKYO (Kyodo) -- Japan's ground troops began Tuesday a large-scale joint exercise with the United States and France for the first time on Japanese soil to increase cooperation in the face of China's growing assertiveness.

"ARC21" will be held through next Monday as Tokyo seeks to deepen defense cooperation beyond its U.S. ally with "like-minded countries," Japanese Defense Minister Nobuo Kishi said ahead of the drill.

France "is the only European country with a permanent military presence in the Indo-Pacific region," Kishi told a press conference in Tokyo. "It is also a like-minded country that shares with Japan the vision of a free and open Indo-Pacific."

The move comes as Tokyo and Washington boost their alliance over regional issues including the Japan-controlled Senkaku Islands, which are claimed by Beijing, in the East China Sea amid an escalation of China's maritime assertiveness in the East and South China seas.

France has strategic interests in the Indo-Pacific where it has territories, including the French island of Reunion in the Indian Ocean and French Polynesia in the South Pacific.

The forces of the three countries will engage in urban warfare drills followed by amphibious operation exercises, according to Japan's Ground Self-Defense Force.

On the first three days until Thursday, the troops will be stationed at GSDF Camp Ainoura in Nagasaki Prefecture in southwestern Japan, where they will work together to plan the operations.

On Friday and Saturday, the troops will be sent by aircraft to the GSDF Kirishima training ground that straddles Miyazaki and Kagoshima prefectures to engage in an urban warfare drill at the facility, which is designed to look like a remote island.

The GSDF rapid amphibious deployment brigade, dubbed "Japanese Marines," will be among the units participating in the exercises. Around 100 troops from the GSDF and 60 personnel each from the French army and U.S. Marine Corps will participate.

Japan has been trying to strengthen the Self-Defense Forces' abilities to defend remote islands at a time of increased maritime actions by China, especially around the Senkaku Islands.

Four of the U.S. Marines' Osprey tilt-rotor aircraft stationed at the Maritime Self-Defense Force's Kanoya Air Base in Kagoshima Prefecture will join the drills.

In line with the drills, the three countries are joined by Australia in exercises in the East China Sea through next Monday.

The exercises involve GSDF helicopters landing and taking off from ships of the MSDF and the French navy staying off the west coast of Kyushu, Japan's southwestern main island.

As Asia has become a center of global economic growth with China's clout increasing, European nations have adopted Indo-Pacific policies. Britain said in its recent defense and foreign policy review that it will be "deeply engaged" in the region.

Britain's aircraft carrier Queen Elizabeth and its strike group, including a frigate from the Netherlands, left Britain earlier this month. During the seven-month voyage, the group of ships is due to make several port visits including Japan to show its presence in the Indo-Pacific region.

Germany has also said it plans to send a frigate to the region.

Japan is eyeing conducting drills with the two countries during the visits by their vessels, according to the Japanese Defense Ministry.