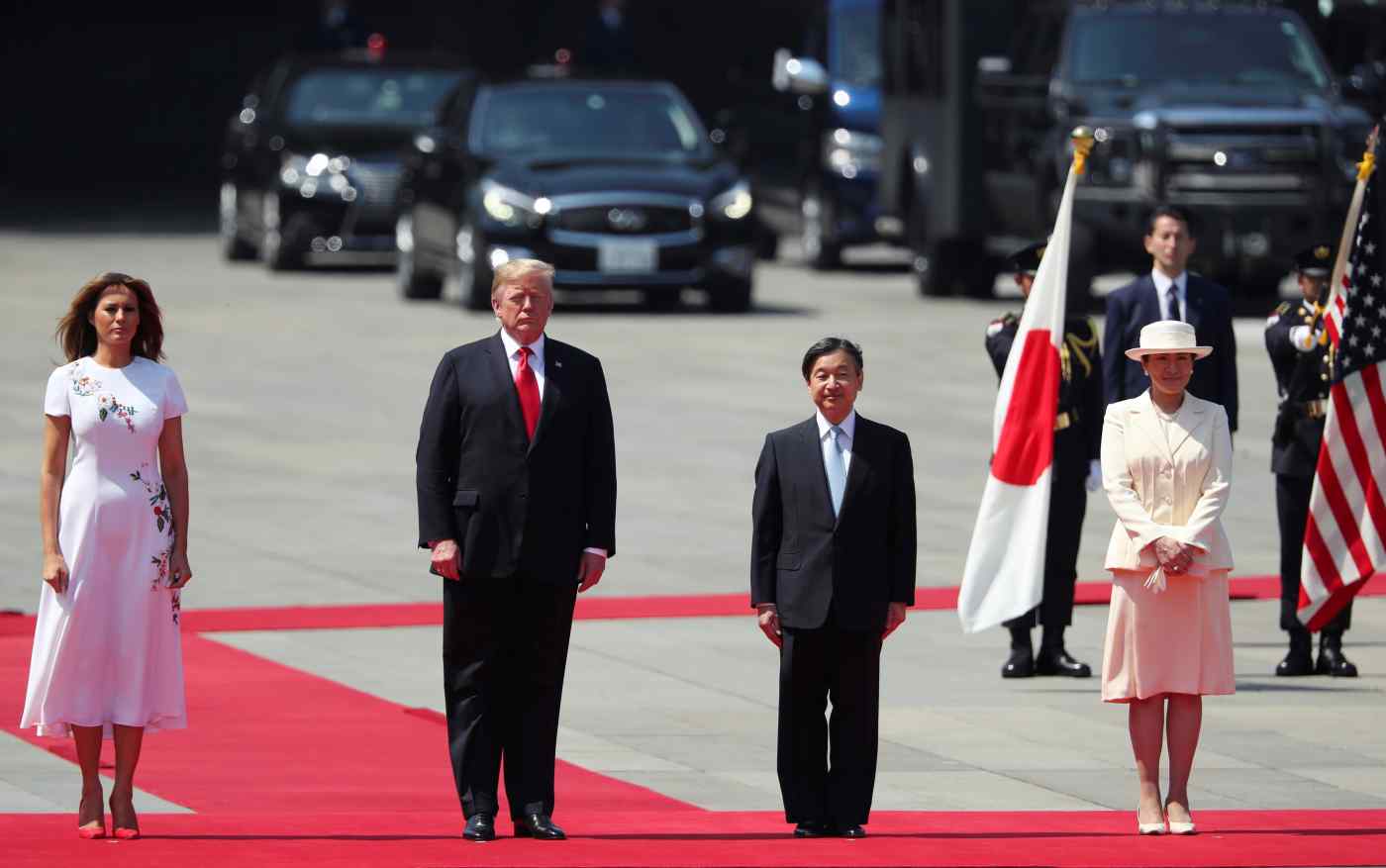 U.S. President Donald Trump and first lady Melania Trump stand next to Japan's Emperor Naruhito and Empress Masako at the Imperial Palace in Tokyo on May 27.   © Reuters
May 27, 2019 09:57 JST | Japan
CopyCopied

TOKYO (Kyodo) -- Emperor Naruhito met U.S. President Donald Trump on Monday, the Japanese monarch welcoming his first state guest since ascending to the throne on May 1.

At the Imperial Palace in central Tokyo, the emperor and Empress Masako received Trump and first lady Melania, as a festive mood prevails over the start of Reiwa, as the country's the new imperial era is known.

The Japanese government decided to hand Trump the honor of being the first state guest in the new era in hopes of showcasing the depth of the nations' bilateral alliance.

Prime Minister Shinzo Abe is also extending extra hospitality to Trump during his four-day state visit through Tuesday, which Abe described as "historic."

Emperor Naruhito ascended the Chrysanthemum Throne, taking over from his father Akihito who stepped down on April 30 to end his three-decade reign. It was the first abdication by a Japanese monarch in over 200 years.

Monday's meeting with the Trumps kicks off a new period of imperial diplomacy overseen by an emperor and empress who have a wide range of international experience, more so than any of their predecessors, as both have spent a number of years living overseas.

Emperor Naruhito is the first Japanese emperor to have studied abroad, at Britain's University of Oxford, and his wife Masako is a Harvard-educated former diplomat.

Trump will hold a summit with Abe and participate in a banquet at the palace later Monday. A foreign leader's state visit normally involves a meeting with the emperor and a French dinner.

Trump is staying three nights in Japan as a state guest, one night more than his predecessor Barack Obama did in 2014. Trump visited Japan in November 2017, less than a year after he moved into the White House, and met then Emperor Akihito as an official guest.

During a summit with Abe in Washington ahead of Emperor Naruhito's enthronement, Trump said he had initially hesitated to accept an invitation to meet the emperor, unsure if he could make the trip.

Trump said he had asked Abe how big the imperial succession would be for the Japanese people compared to the Super Bowl and Abe replied, "It's about 100 times bigger," leading him to immediately agree to visit.