Tomoyuki Moriyama, who heads Japanese trading house Mitsui & Co.'s South Korean operations, told Moon that he was concerned about the situation affecting business relations. Moriyama, who serves as the chair of the Seoul Japan Club, which has membership of about 400 Japanese companies, said he was confident that Moon would "take appropriate measures."

In response, Moon stressed that economic exchanges and politics "must be viewed separately," according to the presidential Blue House.

"With 10 million people traveling between Japan and South Korea every year," he continued, "I hope broadening personal interactions will help invigorate" exchange between businesses.

Ties between the two countries have chilled over historical grievances involving Japan's colonization of the Korean Peninsula in the early 1900s. Korean courts recently have ordered Japanese companies such as Nippon Steel & Sumitomo Metal to pay compensation to South Koreans or their families over forced labor during the war. 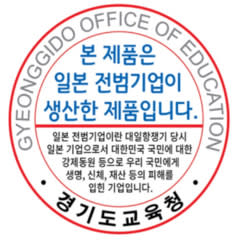 A picture from Gyeonggi Province's Office of Education of the sticker deeming a product as being made by a Japanese "war criminal" company.

The same day, South Korea's largest province signaled that it would shelve legislation to label products from the likes of Nikon and Panasonic as being made by Japanese "war criminal" companies.

The legislation would require schools to put the "war criminal" stickers on products by nearly 300 Japanese companies with price tags of over 200,000 won ($175).

The bill, which still could be introduced later, was intended to "make students aware of the actions of Japanese war criminal companies that have neither publicly apologized nor paid reparations."