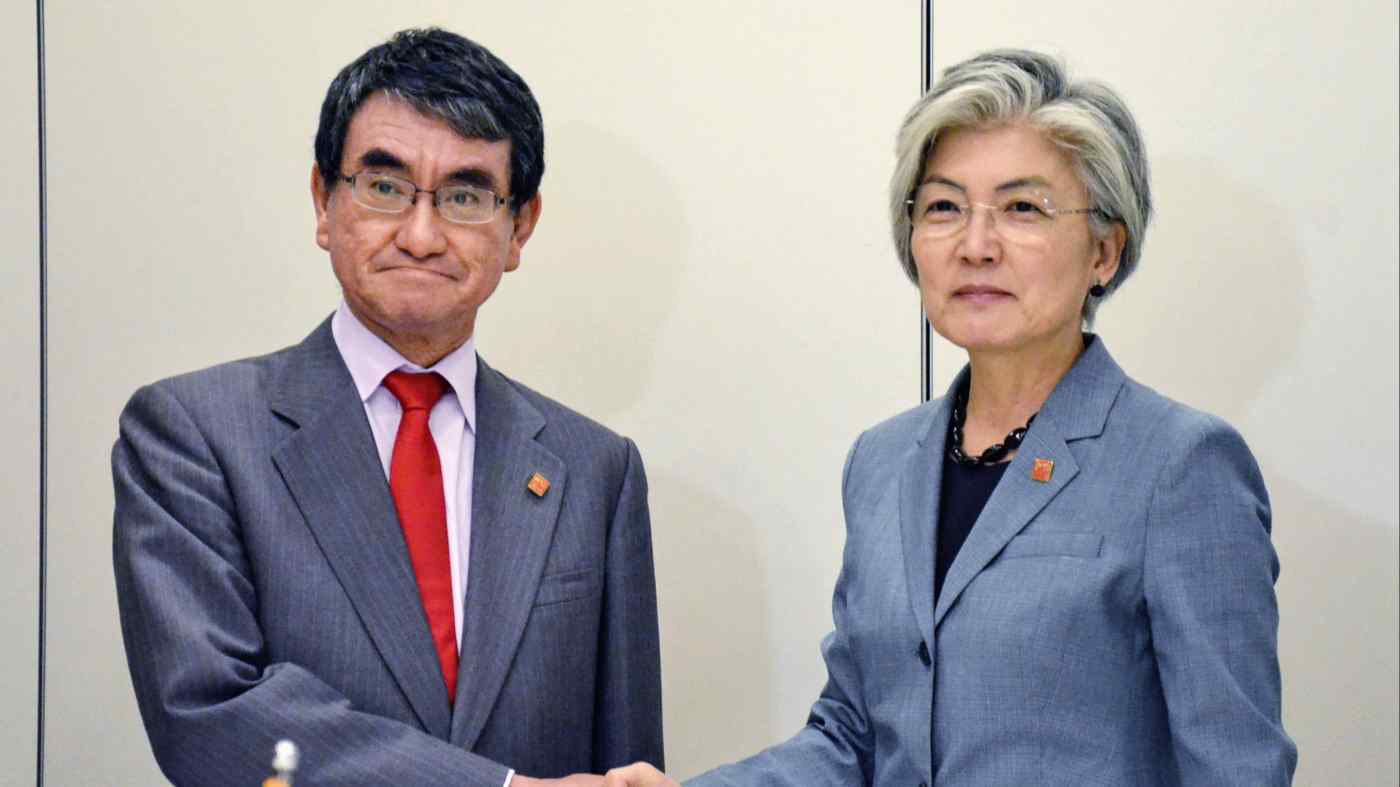 PARIS (Kyodo) -- Japanese Foreign Minister Taro Kono on Thursday turned up the heat on South Korea in a dispute over compensation for wartime labor, but failed to convince Seoul to accept Tokyo's request for arbitration.

In a meeting in Paris, South Korean Foreign Minister Kang Kyung Wha only repeated Seoul's intention to review the request, according to a Japanese Foreign Ministry official.

Kono told reporters later that South Korean President Moon Jae In should come up with measures to resolve the spat by the time a Group of 20 summit takes place in Osaka in late June as Seoul "cannot let the situation remain in violation of international law."

Relations between the two countries have shown no signs of improving following a series of court rulings in South Korea that ordered Japanese companies to compensate for forced labor during Japan's 1910-1945 colonization of the Korean Peninsula.

In a tense exchange at the outset of their meeting, Kono criticized a South Korean Foreign Ministry spokesman for telling reporters there would be "no problem" if Japanese firms just complied with court orders to pay compensation for work done during Japan's colonial rule of the peninsula.

"This remark shows a lack of understanding of the gravity of the situation. I would like you to see that things like this are complicating our countries' relations," Kono told Kang.

Their first face-to-face meeting since February followed Tokyo's request that an arbitration panel involving a third country be established to resolve the dispute.

Tokyo maintains that the issue of wartime compensation was resolved by a 1965 treaty that established diplomatic ties between the two countries, under which Japan provided South Korea with $500 million in financial aid.

Kang said she hopes that with the beginning of the new Reiwa era in Japan, the two countries can resolve "difficult issues" and take relations in a more positive direction.

She said two countries should work together "to heal the pains and scars of the victims."

South Korea has yet to say whether it will agree with the request for arbitration, which was made in line with the dispute-settlement procedures agreed under the treaty.

If Seoul rejects the request, Kono has said, the Japanese government will take the issue to the International Court of Justice.

The two met on the sidelines of a meeting of the Organization for Economic Cooperation and Development, with bilateral ties increasingly strained over the wartime labor issue and other disagreements.

Other Japanese companies have since been hit with similar rulings and had their assets seized.

Due to the frosty ties, Japanese Prime Minister Shinzo Abe may not hold bilateral talks with Moon on the periphery of the G-20 summit in Osaka, western Japan, government sources have said.

During Thursday's talks with Kono, Kang refused to lift a ban on seafood from Fukushima and seven other Japanese prefectures, citing the need to honor the World Trade Organization's ruling last month in favor of the restrictions imposed in the wake of the 2011 nuclear disaster.