TOKYO -- The Japanese passport was again named as the "world's most powerful" by a British consultancy this year, but the Japanese themselves seem little interested in taking advantage, with only 23% holding passports -- a sign that the nation has become increasingly inward-looking in the era of globalization.

In the U.S., the share of people with a passport has jumped 17 percentage points over the past 12 years, to about 44% by 2019, according to data from the U.S. Census Bureau and State Department. Meanwhile, the proportion of Japanese with a passport is the lowest among the Group of Seven industrialized nations.

Japanese passports were rated the world's most powerful for the second year running, according to an annual survey by Henley & Partners, a global residence and citizenship advisory. Singapore tied with Japan for first place, followed by South Korea, whose passport holders can visit 188 countries and territories visa-free. The U.S. and the U.K. ranked 15th. Countries in Europe, North America and East Asia topped the list.

However, Japanese have shown comparatively little interest in traveling abroad. The number of Japanese students studying overseas has fallen from its peak, according to data from the Organization for Economic Cooperation and Development. And relatively few Japanese work for international organizations, given the size of its economy and population, say observers.

But while many Japanese appear to be homebodies, those who do venture abroad find the benefits of a Japanese passport are legion. 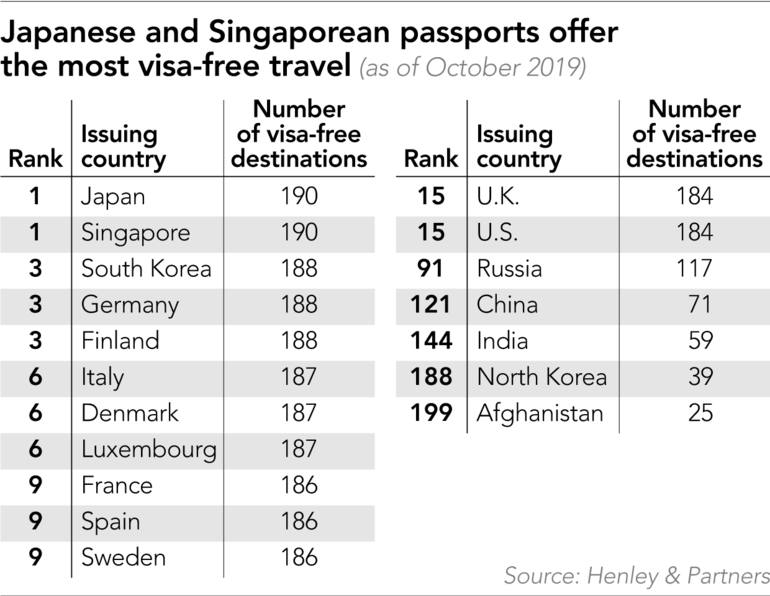 When visas are required for entry, a traveler must have the document issued in advance by the embassy or consulate of the destination country. But in many cases, holders of Japanese passports can skip this preliminary screening. And because Japanese passports are generally trusted, holders can often complete immigration procedures more smoothly than people from elsewhere.

But there is also a downside. Waiving visa requirements makes it easier for undesirable people, such as criminals, to enter. Thus, when determining whether to grant exemptions to people from specific places, the receiving country takes a number of factors into account: prevalence of crime in the sending country, refugee flows, the economic situation, closeness of diplomatic ties.

Japan scores well on these criteria: It has a low crime rate; few Japanese seek refugee status; and the country is economically and politically stable. Moreover, many countries see benefits from deeper business and investment ties with Japan -- and its tourists have deep pockets.

These factors contribute to perceptions that Japanese are "safe" and welcome visitors.

Japanese can visit 190 countries and territories without a visa, but Japan has a visa waiver program with only 68, including the U.S., the U.K, Germany, France and South Korea. Citizens of countries such as China, India and the Philippines need a visa to visit Japan. Waivers are typically offered on a reciprocal basis, but some countries waive visa requirements unilaterally to boost tourism.

A visa waiver program is evidence of goodwill toward the partner country. People in many places appear eager to have Japanese visit for business or pleasure, and many countries that do require a visa have relaxed or simplified approval procedures.

Japanese can receive a warm welcome in some parts of the world simply by showing their travel documents -- a clear benefit of possessing the "world's most powerful passport." It simply seems that not many Japanese are excited by the prospect of an overseas jaunt.