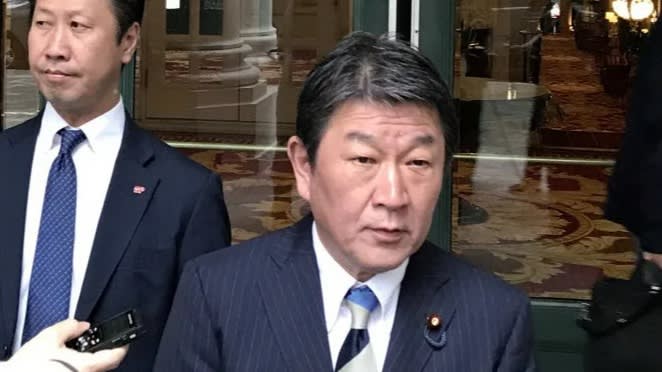 WASHINGTON -- Japan and the U.S. made "significant progress" on trade talks this week, Tokyo point man Toshimitsu Motegi said Friday, suggesting that the two countries may have reached a compromise on major points of contention.

The two sides, led by Motegi and U.S. Trade Representative Robert Lighthizer, sought to hammer out tariff rates on key goods such as autos and agricultural products during the three days of talks that concluded Friday.

Motegi said he and Lighthizer "shared the same direction," adding that "this is our last round of talks."

At the outset of negotiations, Washington pushed for greater access to Japan's agricultural markets while showing little inclination for cuts to tariffs on imported cars, auto parts and other manufactured goods.

The Japanese side has maintained that it would accept beef and other farm imports only to the extent committed to by Tokyo in the Trans-Pacific Partnership. President Donald Trump ordered America's withdrawal from that free trade deal in 2017.

At the same time, Japan has sought U.S. concessions on manufacturing-related tariffs.

"During the negotiations, we managed to maintain Japan's position and protect agriculture," Motegi said.

Japan is seen to have limited tariff relaxation, staying within the standards of the TPP, while also achieving some commitment from the U.S. to open its market for industrial products.

The two governments are trying to schedule a meeting between Trump and Prime Minister Shinzo Abe on the sidelines of the Group of Seven summit in France starting Saturday. Lighthizer and Motegi will attend the meeting, where the two sides will confirm plans to close a deal by September.

Trump and Abe initiated the trade talks when they met last September. Since leaving the TPP, the U.S. side has been eager to sign a bilateral trade deal with Japan, especially ahead of the U.S. elections next fall.