COLOMBO -- Japanese Defense Minister Itsunori Onodera's groundbreaking trip to Sri Lanka this week has signaled that Tokyo is wading deeper into the Indian Ocean, where India and China are increasingly vying for control and influence.

Onodera's visit, from Monday to Wednesday, is the first by a Japanese defense chief to the South Asian island. It is to be capped with a Wednesday afternoon stop at the deep-water port of Hambantota -- an important foothold for China's expanding Belt and Road Initiative.

This follows two other Japanese defense-related visits to Hambantota this year. In early August, a delegation of diplomats and defense officials toured the southern port. And back in April, the Akebono, a Maritime Self-Defense Force ship, became the first naval vessel to drop anchor at the $1.5 billion facility since a Chinese company took charge there last year.

Japan's strategic interest in Hambantota Port reflects its "free and open seas" policy, which calls for a rules-based maritime system to ensure stability and prosperity. "Sri Lanka is an extremely important maritime country, located in an important point of Indian Ocean sea lanes," a senior official of Japan's Ministry of Defense told the Nikkei Asian Review.

The attention on Hambantota, however, obscures an equally significant maritime asset: Sri Lanka's northeastern port of Trincomalee, the world's second-deepest natural harbor and a prized possession in the view of naval experts.

Onodera was also expected to make a whistle-stop there before visiting Hambantota, as Japan is looking to close ranks with India and Singapore and develop Trincomalee as a counterweight to China. The Sri Lankan government wants to turn the area into an export hub, taking advantage of its strategic location at the heart of international trade routes. There is also a plan to build the country's third international airport in the northeastern corner. 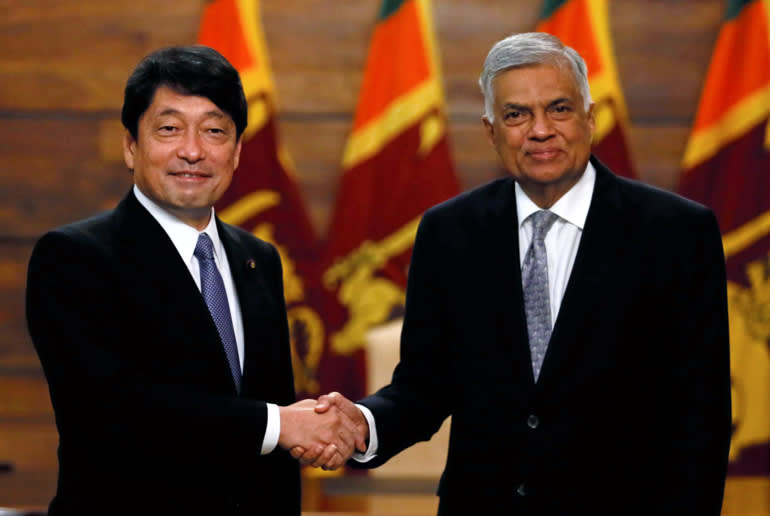 The perception that China is gaining influence in Sri Lanka has only deepened since last year, when state-owned China Merchant Port Holdings was granted a 99-year lease to Hambantota through a $1.12 billion swap meant to reduce Sri Lanka's Chinese debts.

Last week, in its annual report to the U.S. Congress on China's military and security developments, the Pentagon raised a red flag about Hambantota. The port was singled out as a cautionary tale of China flexing its financial muscle via the Belt and Road, creating dependence on Chinese capital and paving the way for dominance of the Indian Ocean.

But Chinese diplomats in Colombo say their critics have not read the fine print in the new port's lease agreement. It gives Sri Lanka's defense and foreign affairs officials -- not the Chinese company -- authority over naval visits, like the stop made by the Akebono.

In this context, Japan's newfound emphasis on the port might even work to China's advantage. Luo Chong, the head of the political section at the Chinese Embassy in Colombo, said the visits by Onodera and the Akebono illustrate the "openness and inclusiveness of the port."

"The Sri Lankan government, the opposition political parties and the navy have said there is no hidden agenda for military use," Luo told Nikkei. "It is a 100% commercial port."

Either way, Western diplomats in Colombo say Japan is determined to protect an economic lifeline. Hambantota sits on the edge of one of the world's busiest shipping lanes, plied by over 60,000 ships annually. The vessels carry 60% of the world's oil and 50% of all container cargo.

"Japan needs the sea routes just as much as China does, and they are now moving in to tap the goodwill they have cultivated independently in Sri Lanka, which no other country can match," one Western diplomatic source said. "Japan is a better bet for the U.S. to counter China in Sri Lanka than India, because Japan is trusted by most Sri Lankans and the Indians are not."

The shipping traffic in Hambantota since it came under China's watch amplifies Japan's commercial links. "A majority of our Ro-Ro business is generated through Japanese carriers, and they top the list in terms of transshipment volume and frequency," said Tissa Wickramasinghe, chief operating officer of the Hambantota International Port Group, the official name of the Chinese-dominated company that controls the harbor. Ro-Ro refers to new cars brought in as transshipment cargo.

Still, despite the growing pushback against China in the region, the fact remains that Beijing has far greater military and economic muscle than either Japan or India. And with so much at stake, it is not about to back down.