Suga sets diplomatic priorities with his first trip to Vietnam "Japan will further strengthen cooperation with ASEAN to increase the resilience of supply chains and build economies in Asia that are resilient to crises," Suga said in a speech at Vietnam-Japan University here, referring to the Association of Southeast Asian Nations.

Suga has chosen Vietnam and Indonesia as the destinations for his first trip abroad to set his foreign policy priorities. Japan hopes to send a strong message that "the central theme of Suga diplomacy is an alliance with ASEAN to counter China's rise," in the words of a foreign ministry official.

Without citing Beijing by name, the prime minister implicitly suggested ASEAN and Japan work together on maritime security to become a counterweight to China. 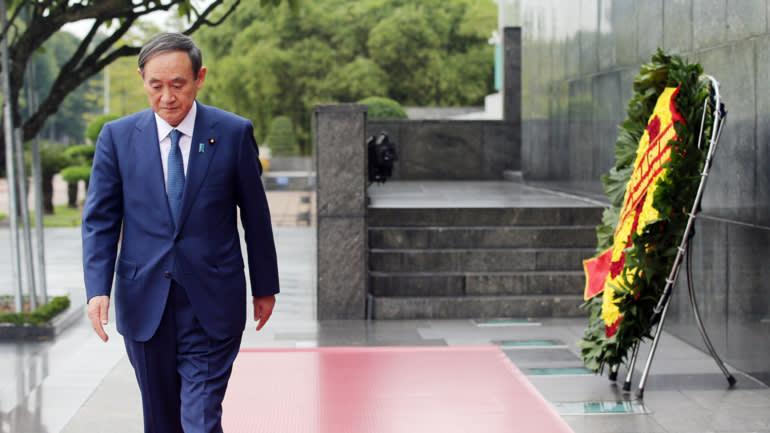 At the same time, members of the bloc are vulnerable to Beijing in terms of national security. China claims most of the South China Sea as its territory, creating territorial disputes, and has built artificial islands to fortify its military presence there. Even ASEAN countries with strong trade and investment links to China are growing increasingly frustrated with Beijing.

Vietnam is one such country. A Chinese Coast Guard vessel rammed and sank a Vietnamese fishing boat in the South China Sea in April.

Indonesia, which accounts for about 40% of both ASEAN's gross domestic product and its population, has also maintained its distance from Beijing. Jakarta in May sent United Nations Secretary-General Antonio Guterres a letter asserting that the "nine-dash line" marking the boundary of China's claims has no basis in international law.

"I would like to reemphasize the importance for all parties concerning the South China Sea issues to work towards the peaceful resolution of disputes based on international law instead of resorting to force or coercion," Suga said in Monday's speech.

Although ASEAN does less trade with Japan than with China, Japanese companies have numerous production facilities and marketing bases in the region. Tokyo's close ties with the U.S., the world's largest economy, are also appealing amid the Sino-American trade tensions.

A deeper economic partnership with ASEAN also serves practical purposes for Japan. With the coronavirus pandemic having exposed the danger of overreliance on Chinese manufacturing, Tokyo is expanding a subsidy program to encourage Japanese companies with China-reliant supply networks to diversify into the region. Under previous Prime Minister Shinzo Abe, Japanese Foreign Minister Toshimitsu Motegi made two ASEAN trips in August: one to Singapore and Malaysia, which have stayed neutral on issues such as the South China Sea, and the other to the more pro-Beijing Myanmar, Cambodia and Laos. Motegi's reappointment by Suga signals the region's continued importance under his administration.

China also continues to work to shore up ties with ASEAN countries, including through economic support. Foreign Minister Wang Yi made official visits to Cambodia, Malaysia, Laos and Thailand this month and stopped in Singapore as well. While in Malaysia, Wang announced plans for a major purchase of palm oil, one of that country's main exports.

Going forward, a key foreign policy question for Suga will be how to set up meetings with other leaders against the backdrop of U.S.-China tensions.

With Japan's focus on ASEAN now established, the next step will likely be strengthening Tokyo's relationship with Washington. But making a concrete move would be difficult until the Nov. 3 presidential election.

Should President Donald Trump be reelected, the U.S. could host a Group of Seven summit as early as this year, giving Suga an opportunity to meet with him on the sidelines.

Multilateral meetings typically held in the fall, including the annual Group of 20 and Asia-Pacific Economic Cooperation summits, have been moved online because of the new coronavirus. Until the pandemic subsides, opportunities for face-to-face diplomacy will be limited until next year.