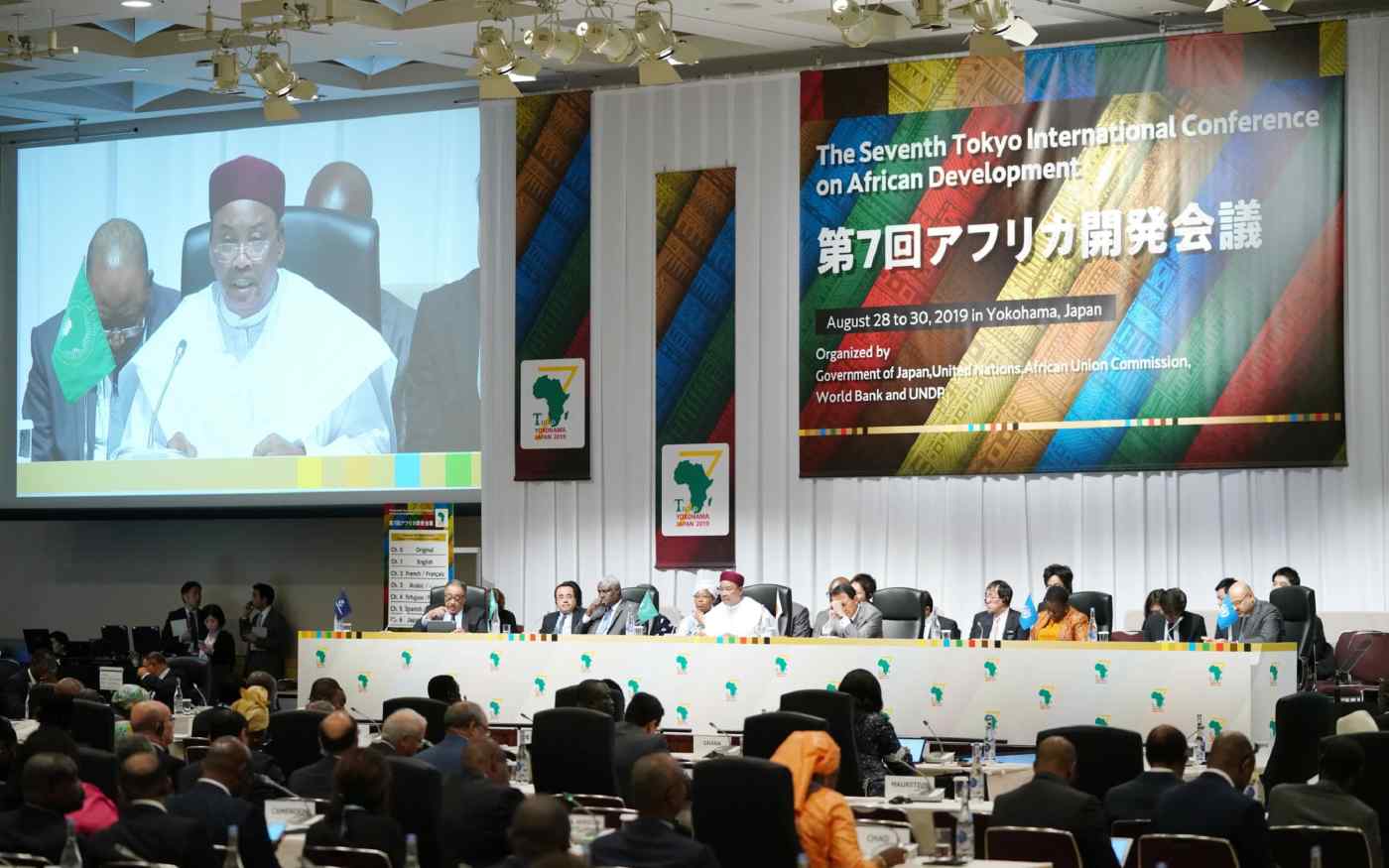 The Tokyo International Conference on African Development, or TICAD, held in Yokohama, is being attended by leaders and representatives from more than 50 African nations and international organizations. (Photo by Kei Higuchi)
August 30, 2019 12:00 JSTUpdated on August 30, 2019 16:46 JST | Japan
CopyCopied

YOKOHAMA (Kyodo) -- Leaders from Japan and Africa on Friday agreed on the need for infrastructure development that takes into account a country's ability to pay off debt, a veiled reference to China's lending practices on the continent.

"We believe that quality infrastructure that guarantees affordability with respect to life-cycle costs is fundamental for sustainable economic transformation," the leaders said in a joint declaration after wrapping up the Tokyo International Conference on African Development in Yokohama.

Critics have accused China of "debt-trap diplomacy," a phrase used to describe the liberal handing out of loans to developing countries that are ill-equipped to pay them off, under its Belt and Road initiative in order to extract economic and political favors.

In an oft-cited example, China took control of the Sri Lankan port of Hambantota in 2017 after the South Asian country ran into debt problems. The same year, the People's Liberation Army set up its first overseas base in Djibouti on the Horn of Africa, where China helped build a roughly 760-kilometer railway to Ethiopia.

"Many countries, not just Japan and China, are contributing to the development of Africa," Japanese Prime Minister Shinzo Abe told a news conference. "But such support should not put an excessive debt burden on countries on the receiving end."

To address the issue, Japan has offered to provide training in debt and risk management to officials in 30 countries over the next three years.

The three-day conference, its seventh iteration, was attended by leaders and representatives from more than 50 African nations as well as international organizations. This year, one of the focuses was the contribution of business in boosting economic growth on the continent.

The declaration said the leaders recognized the "role of the private sector in Africa's development" and will work together to attract foreign investors.

Japan is concerned that it is falling behind in the race to tap into the fast-growing market, which is projected to grow to 2.5 billion people in 2050, or a quarter of the global population.

Abe pledged that Japanese companies will invest more than $20 billion in Africa over the next three years, though that falls far short of the $60 billion that China pledged last September.

As Africa is facing such challenges as poverty, climate change and outbreaks of infectious disease, the leaders agreed to step up efforts to "take advantage of Africa's opportunities for transformation" including its plentiful natural and human resources.

"For sustainable development, we need to cultivate our youth," said Egyptian President Abdel Fattah el-Sisi, who co-chaired the conference with Abe. According to data from the African Union, 65 percent of the continent's people are under 35.

The leaders took "good note" of Japan's vision for a free and open Indo-Pacific, an initiative that stresses the importance of the rule of law amid Beijing's growing assertiveness in the East and South China seas.

With China growing its influence in Asia and Africa, Japan is using its hosting of TICAD and subsequent promises of support to garner the backing of participating nations for such issues of concern.

In another example, the need to "urgently reform" U.N. bodies including the Security Council was also reaffirmed, as Japan seeks to garner the support of African countries for its aspirations to become a permanent member.

Discussions during the conference also turned to universal health coverage, the sustainable use of marine resources, and ways to secure peace and stability in the region.

"We see good examples of this in Asia in places such as Aceh and East Timor, and I believe Africa will also become a great model of this."

TICAD, which is co-hosted by the Japanese government, the United Nations, the World Bank, the U.N. Development Program and the African Union Commission, had been held every five years from 1993 until 2013, when it switched to being held every three years.

The next iteration will be held in a yet to be announced African city in 2022.