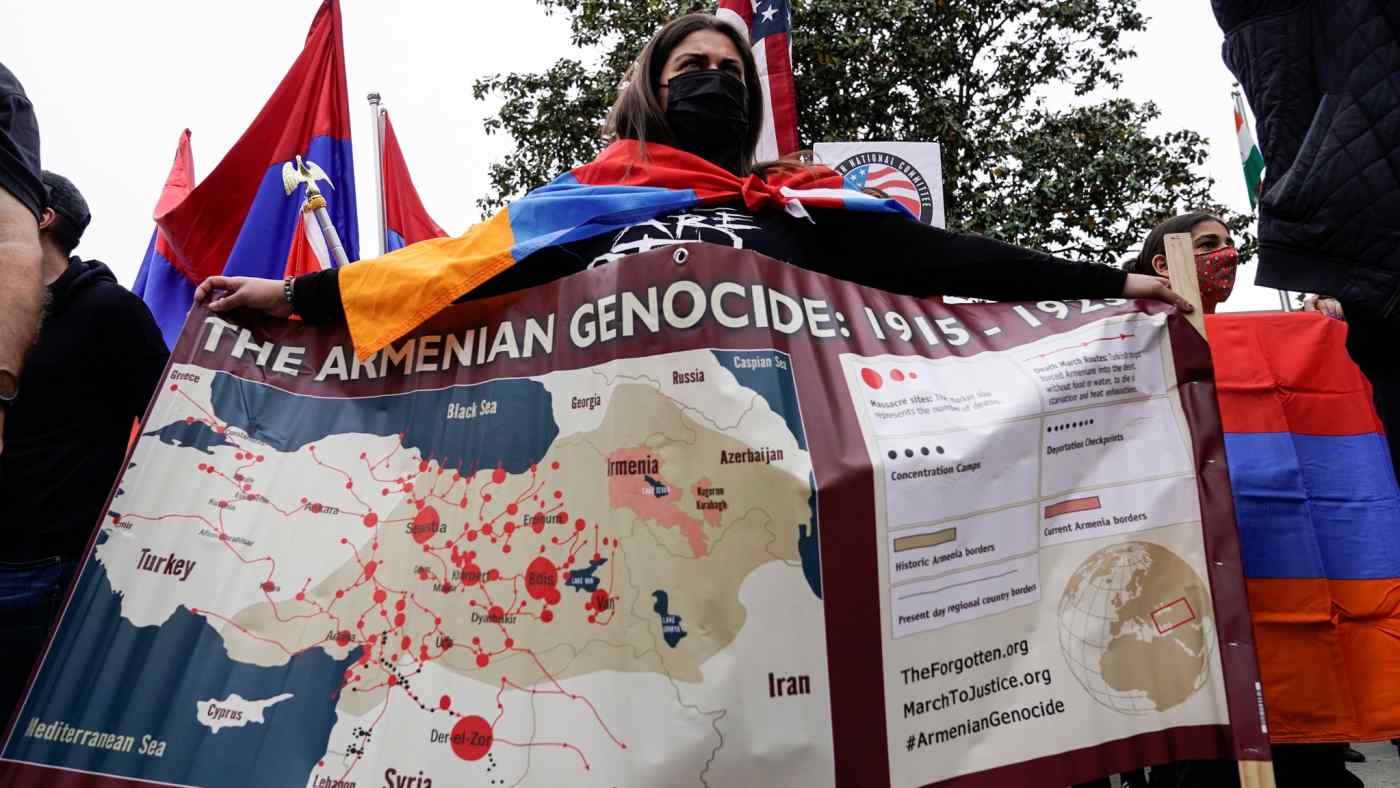 Members of the Armenian diaspora rally in front of the Turkish Embassy in Washington after U.S. President Joe Biden recognized that the 1915 massacres of Armenians in the Ottoman Empire constituted genocide in April. Japan has yet to ratify the U.N. Genocide Convention adopted in 1948.   © Reuters
MIKI OKUYAMA, Nikkei staff writerMay 15, 2021 00:09 JST | Japan
CopyCopied

TOKYO -- Lawmakers from Japan's ruling party on Friday drafted proposals for the government to beef up its human rights diplomacy with steps such as ratifying a United Nations convention on genocide and introducing legislation to enable sanctions.

The recommendations from the Liberal Democratic Party's Foreign Affairs Division also urge government support for corporate due diligence on human rights risks. The party plans to submit the proposals this month.

The move comes amid growing scrutiny of alleged Chinese abuses against the Uyghur Muslim population in Xinjiang, and concern that Japan's relatively slow response could be seen as as being soft on human rights issues.

The U.N.'s Genocide Convention, adopted in 1948 in response to the Holocaust, requires signatories to make such acts of mass murder punishable by law. About 150 U.N. member countries, including China, have signed on, but Japan is not among them.

The Japanese government has been reluctant to join, citing concerns about the need for new domestic legislation to penalize the full range of activities covered by the treaty, which include conspiracy or incitement to commit genocide. Some in opposition parties supporting the treaty argue that current laws cover the necessary bases.

The LDP proposal presents options including revising existing legislation to provide for sanctions such as asset freezes and entry bans in response to human rights abuses, or passing a new law similar to the U.S. Magnitsky Act for this purpose.

A cross-party alliance of Japanese lawmakers aiming to craft legislation to enable sanctions against foreign authorities over human rights violations also held a meeting Friday. The group released a draft of a proposed bill that would allow for parliament to push the government to look into alleged abuses.

With a Group of Seven summit coming up next month, "if we don't take action, our stance on human rights will come into question," said former Defense Minister Gen Nakatani, the head of the lawmakers' alliance.

G-7 foreign ministers issued a statement early this month calling on China to "respect human rights and fundamental freedoms" and expressing deep concern about abuses in Xinjiang and Tibet.