The oil-rich country will also have to work harder as the leader of the Middle East at a time when U.S. influence in the region is waning. As the kingdom further emerges on the world stage, Asian countries cannot remain idle spectators and merely rely on the Middle East for their energy needs.

Saudi Deputy Crown Prince Mohammad bin Salman, 31, is leading the way under his Vision 2030 economic structural reform plan, which was announced in April 2016.

The plan includes an end to Saudi Arabia's dependence on oil, an initial public offering by state-run Saudi Arabian Oil Co., known as Saudi Aramco, and a shift to an investment-led economic structure.

Although strict Islamic disciplinary rules even ban the construction of movie theaters, Prince Mohammad has created the General Authority for Entertainment as part of his social reform initiative.

The drastic reforms implemented by the young prince are being accompanied by a sense of apprehension. While modernization has proceeded slowly in Saudi Arabia, possible backlash over the reforms has aroused concern among the royal family. 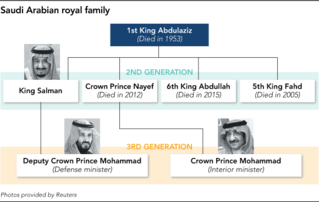 The moves by Prince Mohammad are tangled up in power struggles in the kingdom, as he has been given great authority by his father, King Salman.

King Salman will visit Japan from Sunday until Wednesday as part of his trip to Asia. During the first visit to Japan by a Saudi king in 46 years, since King Faisal visited in 1971, the king will meet Japanese Prime Minister Shinzo Abe to confirm cooperation between the two countries in achieving goals set in Vision 2030.

The Saudi monarch's visit is an important opportunity for Japan, which early on voiced its support to cooperate with the structural reform plan.

Japanese government officials believe the country cannot be simply an observer of the reforms, so Tokyo will support the changes happening in Saudi Arabia through expanded cooperation in economic fields, cultural exchanges and security measures.

In 2006, Crown Prince Sultan bin Abdulaziz visited Japan with a "Japan file" detailing the country's politics, economy and other matters. When the crown prince died later, the file was taken over by King Salman, who was then the governor of Riyadh. It is reported that he still keeps the file on hand.

However, Japanese companies maintain a cautious stance toward cooperation with the kingdom. They well remember unfavorable developments in relations between the two countries, such as Tokyo-based Arabian Oil's failed negotiations to renew its exploration rights in Saudi Arabia. Also, Japan's companies failed to win an order to participate in a subway construction project in Riyadh because of their unsuccessful coordination with the Japanese government.

In contrast, U.S. and European companies are shrewdly approaching Saudi Arabia. At the World Economic Forum's annual meeting in Davos, Switzerland, in January, Andrew Liveris, CEO of Dow Chemical, which is promoting a joint petrochemical project with Saudi Aramco in the kingdom, said U.S. chemical companies are witnessing "astonishing transparency" in the Saudi business environment. He pronounced it "as good as anywhere we invest, including the U.S."

This represents a big difference between western and Japanese companies. One Saudi investment adviser said whenever Japanese companies meet Saudi Arabian government officials, they complain about the inefficient bureaucracy, corruption and the difficulties of living in the kingdom.

Japan's SoftBank Group announced a plan to establish an investment fund of $100 billion jointly with Saudi Arabia. But there are no signs of such bold moves coming from any other Japanese company.