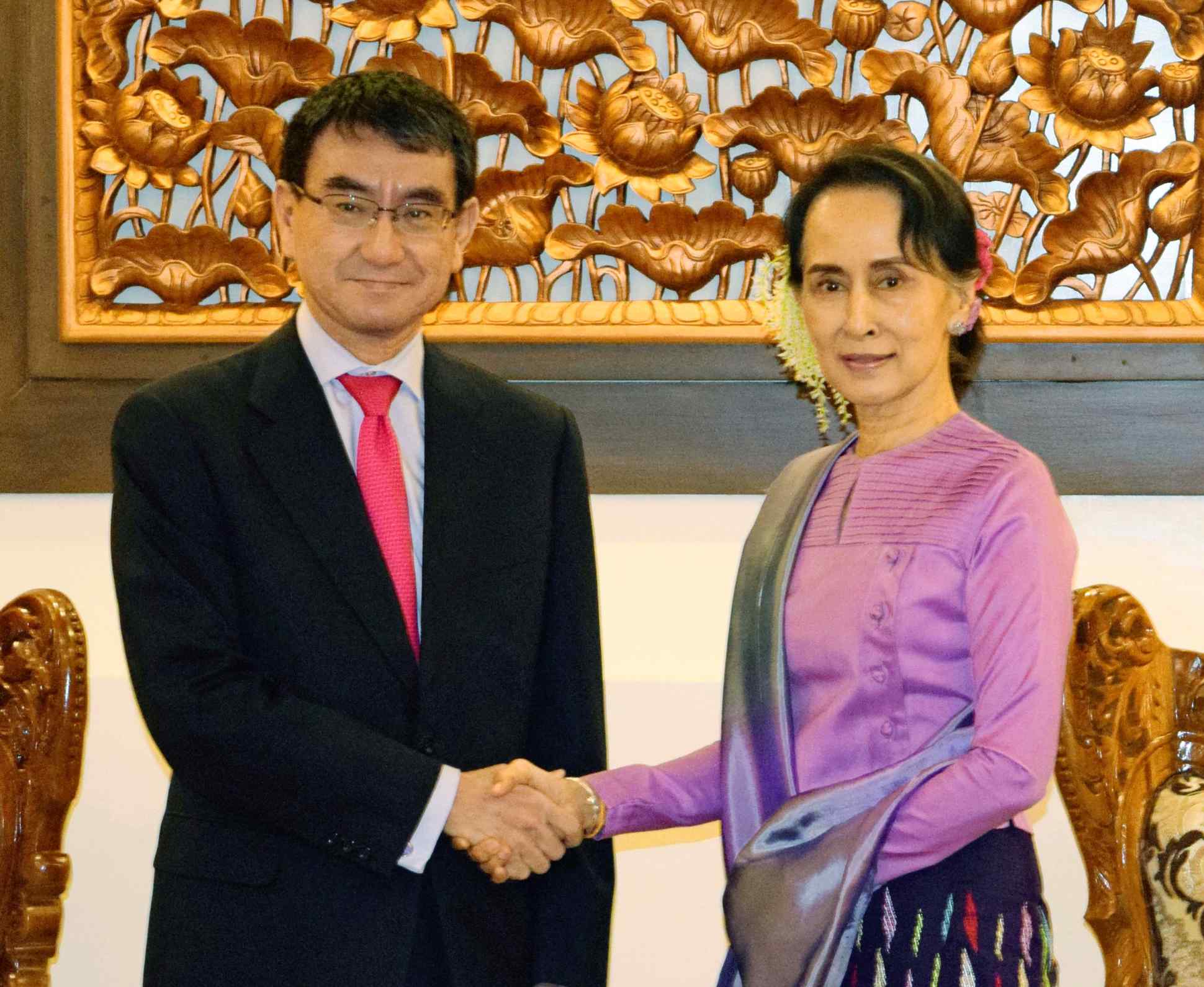 TOKYO -- Japan has continued plying Myanmar with economic aid even as the Southeast Asian nation's treatment of its Rohingya Muslim minority has stirred international backlash, choosing the threat of condemnation over the risk of China taking over as the preferred partner.

Foreign Minister Taro Kono on Saturday became the first foreign cabinet official to tour Myanmar's western state of Rakhine, home to a large Rohingya population, since the humanitarian crisis there began. Japan will continue supporting efforts by Myanmar to resettle displaced persons in the area, Kono said. This came the day after he met with State Counselor and Foreign Minister Aung San Suu Kyi and announced $23 million in fresh aid.

The Rohingya people were labeled illegal migrants by successive military governments in the Southeast Asian country. Even after democratization began, the persecution of the Muslim minority continued. Following attacks by a Rohingya militant group on Myanmar police posts in August 2017, some 650,000 Rohingya have fled across the border to Bangladesh, fearing violence from Myanmar's military sweeps.

The U.S. in November blasted the military's campaign as ethnic cleansing. European countries and Muslim nations have also decried Suu Kyi's handling of the crisis.

But Japan has largely held its tongue. Though Tokyo has expressed concern over the human rights situation, it continues to support the Myanmar government's attempts to build a democratic state, maintaining that the Southeast Asian nation's self-commitment will be essential to resolve the Rohingya crisis.

At a United Nations Human Rights Council meeting in Geneva on Dec. 5, Japan argued that dialogue with Myanmar was necessary for an effective fact-finding mission and abstained when a draft resolution strongly urging the country to fully cooperate with a U.N. came up for a vote. Japan also abstained in November when a U.N. General Assembly committee on human rights adopted a resolution condemning Myanmar's human rights record.

In fact, while other countries have balked, Japan has ramped up economic assistance to Myanmar. Prime Minister Shinzo Abe met with Suu Kyi at the Association of Southeast Asian Nations leaders' summit in November and invited President Htin Kyaw to Japan in December. Myanmar "is an economically, politically and geopolitically important region," a senior official in Japan's Ministry of Foreign Affairs said.

This is particularly true as China works to extend its sphere of influence across Asia using the Belt and Road infrastructure-building initiative. Meeting with Suu Kyi in Beijing in December, Chinese President Xi Jinping said his country was committed to supporting infrastructure projects in Myanmar.

To be sure, the Southeast Asian nation offers rich economic opportunity. Myanmar's economy has grown around 7% a year since 2012, and the government has worked to improve the investment environment, including through deregulation. Japan has provided strong government support for the Thilawa Special Economic Zone on the outskirts of Yangon, as well as yen financing for infrastructure improvements, to assist economic reform. As of November, 369 Japanese companies had a presence in the country, according to the foreign ministry.

Japan's actions in Myanmar are closely linked to the Abe government's "Free and Open Indo-Pacific Strategy" designed to bring stability and growth in Asia and Africa. Overland routes through Myanmar could provide a path between the South China Sea and the Indian Ocean that does not rely on ships navigating the Strait of Malacca, a traditional chokepoint for ocean shipping.

The Japanese government is working with its Myanmar and Thai counterparts to develop a special economic zone in Dawei, a city in southeastern Myanmar. China, meanwhile, has opened an oil pipeline between the southwestern Chinese city of Kunming and the port town of Kyaukpyu in Myanmar and is working to develop harbor facilities there.

Myanmar is grateful for Japan's long-term support, Suu Kyi told a joint news conference Friday with Kono in the capital, Naypyitaw. Japan is aware that it risks international criticism by continuing to aid the increasingly isolated country, but it cannot let China bolster its influence over the region unchecked.

"Is it possible that China wishes to isolate Japan in the international community?" a Japanese government source asked.