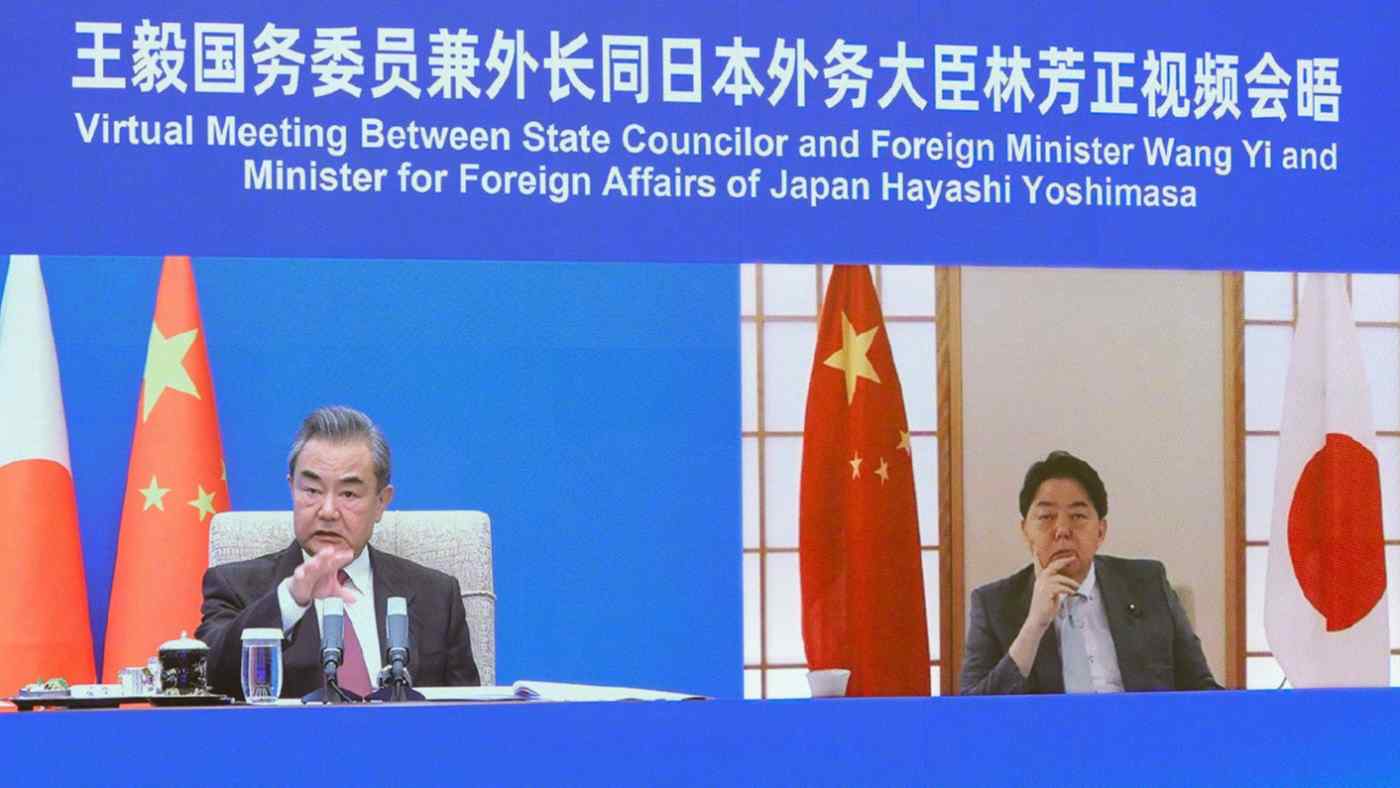 China, which has close ties with Russia, has refrained from condemning Moscow over its invasion of Ukraine that started more than two months ago. Western nations are ramping up pressure and sanctions on Russia to end the atrocities.

During the 70-minute virtual talks, the first dialogue since November, Hayashi also stressed the need for the international community to jointly work to achieve North Korea's denuclearization, and agreed with Wang to closely coordinate, according to the Japanese Foreign Ministry.

Concerns are growing that Pyongyang is preparing for more provocations, including the launch of another intercontinental ballistic missile and the resumption of nuclear tests, in the near future. U.S. President Joe Biden is scheduled to visit South Korea and Japan starting later this week.

"The international community faces big challenges. It is necessary to communicate closely and make efforts toward building constructive and stable relations," Hayashi was quoted by the ministry as telling Wang.

Japan and China are major trading partners with close economic ties. But their relations are often tense, with Beijing repeatedly sending ships to waters around the Japan-administered Senkaku Islands in the East China seas.

The uninhabited islets are claimed by China, which calls them Diaoyu.

Russia's onslaught has been strongly condemned by Japan and other nations as an instance of unilateral use of force to change the status quo in violation of international law. The war has also raised alarm about its possible implications for the Indo-Pacific.

During his call with Wang, Hayashi underscored the importance of peace and stability in the Taiwan Strait, and expressed "serious concern" about the situations in the East and South China seas, according to the ministry.

Beijing views Taiwan as a renegade province to be reunified with mainland China, by force if necessary. It is also engaged in territorial disputes with neighboring countries in the South China Sea.

Highlighting Japan's sense of concern, Prime Minister Fumio Kishida has said the security of Europe and Asia are not separable and that what happened in Ukraine could also occur in East Asia.

With 2022 marking the 50th year since Japan and China normalized ties, Wang said it is "an important milestone" in developing their relationship, according to the ministry.

But Wang was quoted by the Chinese Foreign Ministry as telling Hayashi that Japan should "not allow forces trying to undermine bilateral relations" to become more "powerful."

Wang also called on Japan not to work with the United States to strengthen cooperation to counter China, the ministry added.

Hayashi and Wang did not touch on a possible visit to Japan by Chinese President Xi Jinping as a state guest after it was delayed due to the COVID-19 pandemic, a Japanese Foreign Ministry official said.

The spread of coronavirus infections in China despite its "zero-COVID" policy has raised concern about the world's second-largest economy with strict lockdown measures imposed in Shanghai, where many Japanese firms operate.

Hayashi asked Wang to protect the legitimate business activities of Japanese companies in China and to ensure the safety of Japanese citizens there amid the spread of COVID-19, the ministry said.

In the one-on-one virtual meeting, Hayashi also sought China's apology for the temporary detention in February of an official at the Japanese Embassy in Beijing.

China argued at the time that the diplomat was engaged in inappropriate activity, a claim rejected by Japan, which said the official was performing legitimate duties.

The Japanese foreign minister urged China to prevent a recurrence of such incidents, the ministry said, with Tokyo viewing the case as a violation of the Vienna Convention on Diplomatic Relations. The convention states that diplomats cannot be arrested or detained in a country they have been dispatched to.