Next up is security officials' meeting with US, India and Australia, annual report predicts TOKYO/NEW YORK -- Pandemic-driven acrimony between China and the U.S. has grown into a "new Cold War," according to a book-length annual report released Friday by Japan's only national think tank covering security.

COVID-19 is blamed in the 25th edition of the East Asian Strategic Review from the National Institute for Defense Studies. The disease led to economic stagnation in China, fueling public dissatisfaction with President Xi Jinping's leadership, it says, adding: "In response, the Xi administration sought to overcome this by restarting economic activities and tightening its control over society."

The hard line extended to Hong Kong and Taiwan, as well as stepped-up maritime activity in the South and East China seas, according to the review. It says China's firing of anti-ship ballistic missiles in the South China Sea was done with an eye toward standing up to the U.S. military.

On the U.S., the document notes that the army, navy, air force and marines have been separately developing their own multidomain-operations concepts for possible conflicts with China and Russia.

Now the Pentagon is pursuing a new "Joint Warfighting Concept," converging plans for the land, air, sea, space and cyberspace domains as well as the electromagnetic spectrum, according to the report.

With a new focus on the Indo-Pacific, the U.S. actively deployed strategic bombers and aircraft carriers in the Western Pacific in 2020, the review says. 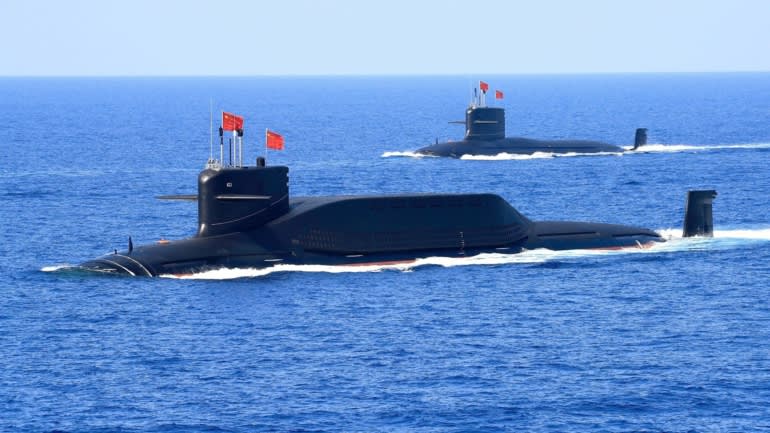 A nuclear-powered Type 094A Jin-class ballistic missile submarine of the Chinese People's Liberation Army Navy is seen during a military display in the South China Sea.   © Reuters

On top of such three-way engagements as the Japan-U.S.-Australia, Japan-U.S.-South Korea and Japan-U.S.-India frameworks, "security cooperation could be further developed into quadruple cooperation among Japan, the United States, Australia, and India," the review says, listing the members of the Quadrilateral Security Dialogue, or Quad, which has been gaining prominence in recent months.

The Quad held its first leaders' meeting online in mid-March, with U.S. President Joe Biden, Japanese Prime Minister Yoshihide Suga, Indian Prime Minister Narendra Modi and Australian Prime Minister Scott Morrison agreeing that the Quad will be a vital forum for cooperation in the Indo-Pacific. Foreign ministers of the four countries have agreed to meet annually.

The report notes that the four countries view the Quad grouping as a hedge to prepare for an uncertain future as Sino-American tensions rise and Beijing takes increasingly aggressive actions in the South China Sea.

The Quad, which in its current form is a discussion among foreign ministry officials, could see future meetings among security officials of the four countries and lead to more defense cooperation, the report says.

"Of course, the four countries have different perceptions of threat regarding China and have separate China policies," it says. "There are also discrepancies regarding a U.S.-led international order, and some say that it is too early for high-level cooperation" among the Quad.

"Yet if China continues to take actions that the international community sees as concerning, including unilateral attempts to alter the status quo, it is likely to push the four countries into deeper cooperation between security authorities," the review adds.

On the Korean Peninsula, the report discusses how North Korea pressured South Korea through various means to separate it from its cooperation with the U.S. ahead of the establishment of the new American administration.

South Korean President Moon Jae-in's administration has indicated a strong motivation to improve inter-Korean relations, and the South's actions "appeared to distance itself from the United States," the document says.

It speaks of attempts in Seoul to limit the topics to be discussed at the U.S.-South Korea working group set up to coordinate policy engagement with the North. This reflects voices in South Korea calling for Seoul to move ahead with cooperation with North Korea independently.

The East Asian Strategic Review does not necessarily reflect official positions of the Japanese government or the Ministry of Defense, instead attributing its analyses to the researchers identified as chapter authors.