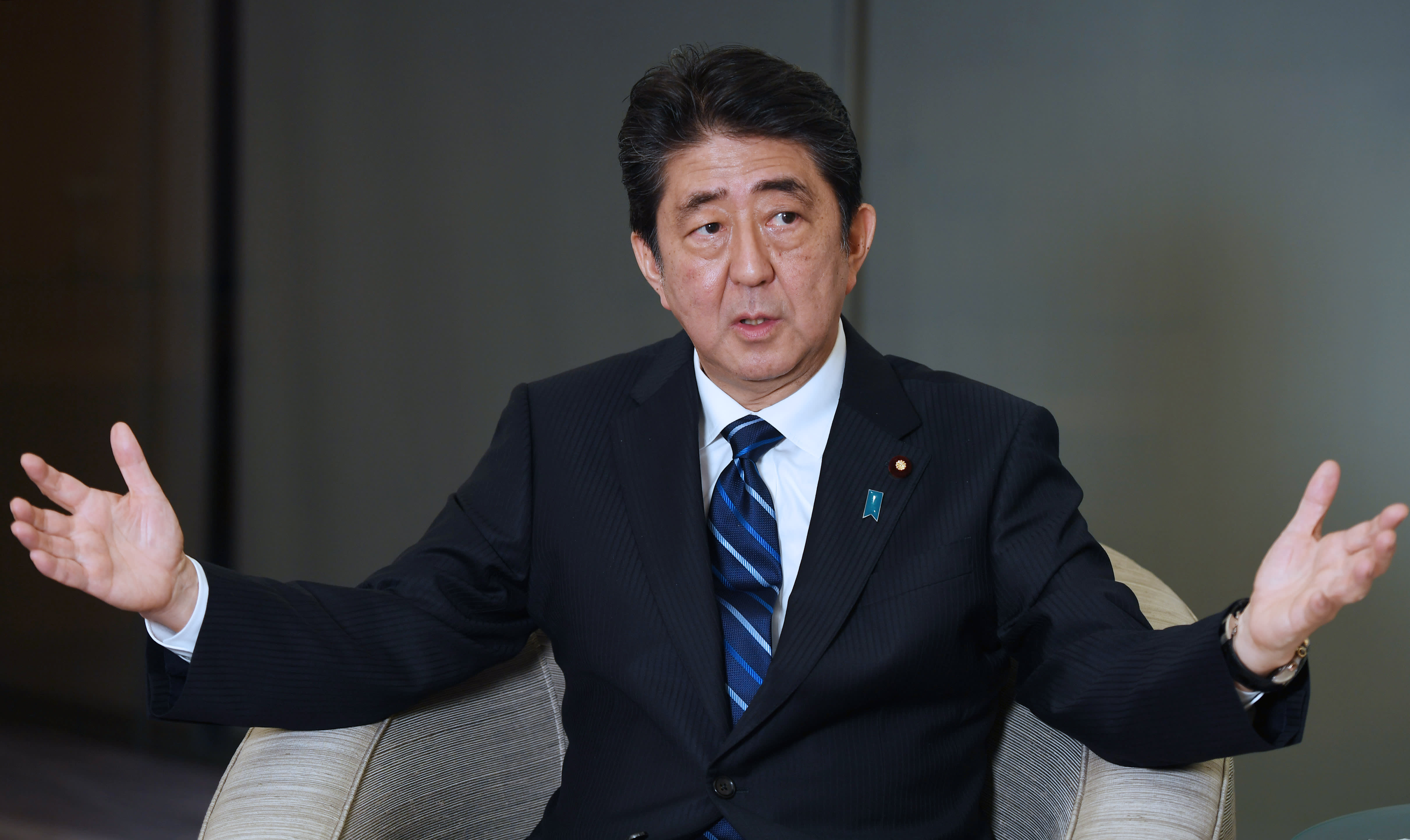 Japanese Prime Minister Shinzo Abe speaks to The Nikkei and the Nikkei Asian Review on Sept. 12. (Photo by Masayuki Terazawa)

TOKYO -- As North Korea rapidly develops its nuclear weapons capability and China grows as the top economic and military power in the region, Japanese Prime Minister Shinzo Abe vowed to stop Pyongyang's nuclear program and to strengthen Japan's defense capabilities in an interview with The Nikkei and the Nikkei Asian Review.

Q: You say now is the time to apply pressure on North Korea. Are you planning to enter into a dialogue at some stage?

A: The international community must put pressure on North Korea until it commits to give up the nuclear weapons program. There is little point pursuing dialogue for the sake of dialogue. It has to be aimed at changing North Korea's policies. We welcome that a new sanctions resolution was passed by the U.N. Security Council at such a speed and in a unanimous vote with support from both China and Russia. North Korea will change its policies only when the international community shows its determination by implementing the resolution. We want to apply maximum pressure, so that North Korea commits to perfect, verifiable and irreversible denuclearization and starts taking concrete steps toward that commitment. Japan, the United States and South Korea are on the same page that dialogue is only possible after that commitment has been made.

Q: What are the conditions for the dialogue?

A: The commitment that I just stated.

Q: Do you plan to visit North Korea to break the diplomatic impasse?

A: Nothing will come out by visiting there blindly. I believe now is the time for the international community to collaborate on pressure.

A: Recognizing North Korea as nuclear power means treating it as equal (to other nuclear powers), That would be a wrong step to take. Once it is recognized as nuclear power, there will be no stopping other countries from seeking the same status. It would greatly increase the risk of nuclear proliferation.

Q: Does Japan plan to increase its defense spending?

A: The security environment surrounding Japan is becoming very hostile. To protect its own citizens, Japan needs to beef up its own defense and take on more security responsibilities, in addition to strengthening its alliance with the U.S. It's true that our national defense budget has stayed around 1% of gross domestic product, but there is no rule that says it has to stay within that threshold. External security situations must be taken into consideration in formulating the defense budget. It is not appropriate to link it to a particular level of GDP. I have instructed my government to conduct a review of the (10-year) National Defense Plan Outline and the (five-year) Mid-Term Defense Program. Defense spending will be discussed within that context.

A: Japan relies on the U.S. for such capabilities. Japan has a doctrine of maintaining an exclusively defense-oriented posture and there will be no change to that principle. Our country will never carry out a preemptive attack on our enemy.

Q: Is there a plan to hold a trilateral summit with China and South Korea this year?

A: As the chair of the trilateral forum this year, I'm working with other countries to set up a summit meeting. I hope to hold such a meeting as soon as possible..

Q: Do you plan to visit China next year?

A:  Hosting the summit would bring Chinese Prime Minister Li Keqiang to Japan. The next step would be my visit to China, and then I hope President Xi Jinping would come to Japan. By having the top leaders visit each other, I want to advance the Japan-China relationship.

Q: Are you still committed to raising the consumption tax rate in October 2019?

A: I am planning to raise the tax rate as scheduled. The tax increase will be needed to usher the social welfare system for the next generation and to secure Japan's credibility with the market and the international community.

Q: Why don't you declare an end to deflation once inflation rates stabilize around 1%?

A: As the government, we expect the BOJ to continue efforts to meet the (2% inflation) target. It is important to reach a stage where inflation rises above 2%, and the BOJ is convinced inflation is continuing steadily. It is necessary to make sure that inflation rates will hover around this target.

Q: In May, you said you hope to amend the constitution and put it into effect in 2020. Is there no change to that timetable? Will you put forward a bill in the regular parliamentary session next year?

A: The economy will continue to be my administration's top priority. With the 2020 Tokyo Olympics in sight, there is new momentum to discuss Japan's new era. So I believe this is a time to have a deeper discussion on the basic law that shapes our country. Still, there is no set time table. At the end of the day, any revision has to be approved in a national referendum. The future direction will depend on the discussion within the party and the diet.

Q: There are calls to dissolve the lower house before the oppositions have time to prepare. What are your thoughts?

A: I'm not considering a dissolution [of the lower house] at all.