TOKYO -- Sadako Ogata's contribution to the world was not limited to helping millions of displaced people as the head of the United Nations refugee agency. She also inspired many younger Japanese women to follow suit and fulfill professional ambitions on the world stage.

Ogata, who died in October, was the first woman to serve as the U.N. high commissioner for refugees. Footage of Ogata in a bulletproof jacket visiting war-torn regions during her tenure helped drive home the message that the organization offered opportunities not readily available to women in Japan.

The number of Japanese women working at the U.N. is on the rise, with their ratio far above that at central government offices or private companies.

According to Japan's foreign ministry, Japanese women on career-track positions at U.N. agencies totaled 542, with 41 holding senior management positions, as of January this year, an increase of 150% and 210% respectively from 2001. Female career professionals accounted for 61.5% of Japanese staff at the U.N., and 47.1% of Japanese holding senior U.N. positions.

At the U.N. as a whole, women in professional positions accounted for 44.7%, with 36.8% of senior positions occupied by female staff.

"Japanese women who went to work for the U.N., inspired by Ogata-san, are now being promoted to senior positions," said Kaoru Nemoto, director at the U.N. Information Centre in Tokyo. Nemoto herself joined the U.N. in the 1990s, hoping to follow the trail blazed by Ogata.

The ranks of working women swelled after Japan bolstered legislation on gender equality in 1999, yet the country's track record on female employment still lags far behind that of the U.N.

As of this past July, women made up just 19.9% of central government bureaucrats, holding a meager 5.3% of management positions. The percentages in private sector are similar, with a fiscal 2018 government survey putting the proportions there at 18.8% for career-track positions and 11.8% for management posts, respectively. It may seem at first glance as if women have gravitated toward more international workplaces, but a look at internationally oriented Japanese bodies suggests this does not tell the full story.

Women accounted for 29.5% of Foreign Ministry staff and 6.1% of managers. The figures for the government-affiliated Japan International Cooperation Agency are similar, at 38.9% and 16.8%. The difference may lie in workplace culture.

"From top to bottom, U.N. organizations value diversity, including in gender," Nemoto said, adding that its environment is much more friendlier to working women than that at Japanese organizations. U.N. agencies offer options that are convenient for working mothers, such as flexible hours and telecommuting.

These benefits may lead to more Japanese women going overseas for work. "Women who feel like working in Japan is too restrictive may be going abroad," said Yu Sasaki, a public partnership specialist at UNICEF's Tokyo office.

UNICEF has worked to create a culture where men and women are treated as equal contributors. Of the 120 Japanese people employed at the U.N.'s children fund, more than 70% are female, including Sasaki.

Child-rearing is not seen as solely the province of women, and men frequently take advantage of such benefits as paternity leave. The organization has recommended that its offices around the world provide breastfeeding facilities for nursing mothers. Before joining UNICEF in 2014, Sasaki spent several years in corporate Japan.

She recalled dealing with workplace customs that made her uncomfortable, including having to pour drinks for male colleagues and working late into the night alongside them. UN Secretary-General Antonio Guterres, who took office in 2017, considers it a "personal and urgent priority" to increase the number of women in decision-making positions. He wants women to make up half the U.N.'s staffers, which is a boon to Japanese women who aspire to an international career. 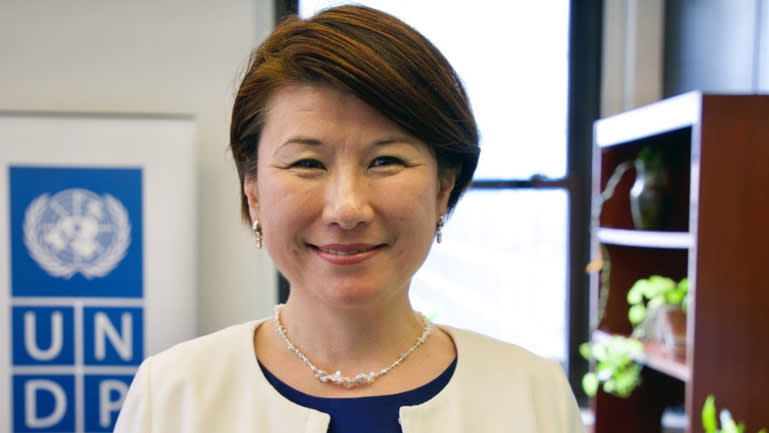 But Japan still has filled less than half its optimal share of staffers at the U.N., calculated on each member's population and financial contribution to the organization. Both workers on the ground and senior leaders help bolster their home countries' clout in the world body.

Japanese men, in particular, are slow to sign up. "I want Japanese men to also show us an enthusiasm for serving in international organizations," Japanese Defense Minister Taro Kono had said when he served as foreign minister from 2017 to September.

"Japan's work environment favors men," Nemoto said on why fewer men join the U.N. "For them, there's a greater opportunity cost when moving from a Japanese organization to an international one."

In response, the Japanese government is expanding the Junior Professional Officer program, in which it pays to send workers to international organizations. The goal is to alleviate concerns over pay or career progression. It is also working to increase interest in U.N. organizations among high school students.

The Foreign Ministry also simplified its admission exam starting fiscal 2018, requiring tests on international law and either Japan's constitution or the economy, instead of all three.

Japan's younger generations are said to be more inward-looking, and the number of those studying abroad is decreasing. As the world grows smaller, Japan needs to find more people willing to represent the country on the international stage.

"Sadako Ogata set the standard for helping refugees: principled, compassionate, effective," Guterres said in a statement after Ogata's death. "Many millions of people enjoy better lives and opportunities thanks to her solidarity and skillful work on their behalf."

Many at the U.N. continue to carry her torch, and hopefully will for generations to come.