ALMATY -- Kazakhstan and Uzbekistan are set to launch a joint visa that will allow tourists to travel fuss-free from one country to the other, a plan that has drawn much interest from their neighbors.

The so-called "Silk Visa" has been delayed from a February launch but officials said that they had received all necessary approvals, leaving just technicalities and equipment to be sorted out.

Ulugbek Qasimxojayev, acting first deputy chairman of Uzbekistan's state committee for tourism, said in December that neighboring Kyrgyzstan and Tajikistan had also shown interest in the idea and that Kazakhstan wanted to involve Azerbaijan and Turkey in what could become a region-wide initiative.

Economic growth in the region had been hard hit by the fall in the prices of natural resources over the last decade or so. These countries now see tourism as a new growth engine.

Kazakhstan opened its doors from 2014 to allow visa-free travel for tourists from the U.S., the U.K., Japan, South Korea, United Arab Emirates, Malaysia, Monaco and Singapore. In 2017, it extended this initiative to all the members of the Paris-based Organisation for Economic Cooperation and Development. Tourist arrivals increased by 8% year-on-year to nearly 680,000 in 2014, but fell to 640,000 in 2017.

Uzbekistan also abolished visas for tourists from eight countries in 2018, including Japan and South Korea. In 2019, it added another 46 countries to its visa-free program, including European countries, Canada, Australia, New Zealand and some Latin American countries.

Zangar Kasteyev, a 45-year-old local businessman, said he opened a hostel for 32 beds in central Almaty last year and he is excited by the prospect of a joint visa launch for the region. "I target foreign tourists because it is absolutely acceptable for them to stay at hostels," he said.

The idea was first mooted in June last year by Dariga Nazarbayeva, the eldest daughter of Kazakh President Nursultan Nazarbayev and member of the senate.

"When they cover [such] long distances [to come to the region] they want to see everything during one trip, that's why we should create one common visa. This could be our Asian Schengen," she said, referring to the Schengen Area that covers 26 countries, including 22 in the European Union, that requires just one visa for tourists to travel freely within.

One of the key groups the Silk Visa is targeting is Chinese tourists. Indeed, there seems to be demand for such a visa. "I would have popped into Uzbekistan from Kazakhstan if it meant less hassle for me," said a Chinese student in Almaty who would like to travel in Central Asia. 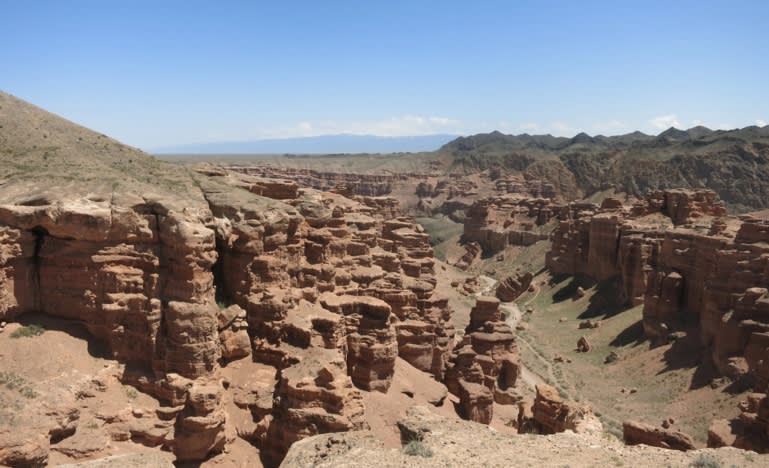 Kazakhstan has many sites of natural beauty. The Sharyn Canyon is one of Kazakhstan's best known tourist attractions is 200 km east of Almaty (Photo by Naubet Bisenov)

But tourism isn’t the only sector that the governments are pinning their hopes on. They also hope that the joint visa will open doors to enhanced trade in the region. Indeed London-based Economist Intelligence Unit’s Central Asia analyst Samten Bhutia said: "Trade among Central Asian countries remains below potential."

Although there are regional trade agreements in place involving some or all of the Central Asian countries such as the Eurasian Economic Union, Bhutia said none had been very successful in significantly increasing trade turnover.

After President Shavkat Mirziyoyev came into power in Uzbekistan in 2016, he adopted an open-door policy and pushed for political and economic cooperation among the Central Asian nations. According to official Uzbek statistics, the country's trade with the four other Central Asian countries -- Kazakhstan, Kyrgyzstan, Tajikistan and Turkmenistan -- increased by 54% to $4.2 billion last year from a year ago.

With China's Belt and Road Initiative laying out much-needed infrastructure, the visa-free area could also help to boost trade and businesses.

"Chinese investment mostly aims to transport mineral resources from the region but if the regional government coordinate [efforts], then the countries can use these projects to interconnect the region and it will directly boost cross-border trade and lead to certain joint economic projects," said Kasymkhan Kapparov, director of the Almaty-based Bureau for Economic Research.

Politically, analysts said that the visa cooperation is a first step toward forming a stronger region. Kazakhstan and Uzbekistan will better be able to reinforce their political will if they become stronger economically via integration of the region. If the Silk Visa program expands to countries such as Azerbaijan and Turkey, there is even potential for the region to form an economic bloc.

But the Economist Intelligence Unit’s Bhutia warned against over-optimism, saying that Central Asian nations produce too much of the same things, such as gold, cotton and energy to be able to stand alone as a bloc.

"This means that there is a much lower level of trade complementarity and therefore these countries tend to trade mostly with other countries such as China and Russia," he said. Other analysts also said a lack of language skills could hamper the development of tourism.