Jokowi vows 'no compromise' on Natuna standoff with China JAKARTA -- President Joko Widodo reasserted Indonesia's claim to its exclusive economic zone in the Natuna Sea -- a water that borders the South China Sea -- as Chinese and Indonesian vessels remain in a standoff in the area.

"In regards to Natuna... there is no compromise when it comes to our nation's territorial sovereignty," Widodo said on Monday at his first cabinet meeting of the year at the presidential palace in Jakarta.

Tensions have been rising over the past week after a number of Chinese fishing boats escorted by two coast guard ships and a fishery patrol vessel entered waters north of the Natuna Islands. Indonesia has dispatched two warships and is planning to send more, according to the chief of a local navy command, as quoted by state news wire Antara on Sunday.

Beijing has no territorial claims over the islands, but says waters off their northern coasts are part of its traditional fishing grounds around the Spratly Islands -- a focal point in Beijing's South China Sea disputes with several other Southeast Asian nations.

Indonesia has repeatedly said it is not a claimant to the South China Sea, but over the past few years it has increasingly locked horns with China over the Natuna waters. Susi Pudjiastuti, Widodo's fisheries minister from 2014 to 2019, aggressively seized -- and in some cases blew up -- foreign fishing vessels, including Chinese, caught poaching in Indonesian waters.

Last week, Indonesia's foreign ministry sent a diplomatic note to Beijing to strongly protest the Chinese vessels' latest actions in the Natuna Sea. On Monday, Foreign Minister Retno Marsudi reiterated Jakarta's stance, telling China to abide by the 1982 United Nations Convention on the Law of the Sea, or Unclos, including its clauses on exclusive economic zones.

"Indonesia will never acknowledge the Nine Dash Lines claimed by China," Marsudi told reporters in Jakarta. "This is clearly our sovereign right... the lines we drew for Indonesia's EEZ are in line with the Unclos. All we want is for China as a party to Unclos is to abide by what's in there."

Meanwhile, chief security minister, Mahfud MD, said the navy will step up regular patrols around the Natuna Sea in the wake of the latest incident. Mahfud also has reportedly had the Indonesian Fishermen Association agree to dispatch 500 fishing vessels to Natuna to help secure the area.

Beijing says it has not violated international law. Chinese Foreign Ministry spokesman Geng Shuang said Chinese fishermen's activities on the Natuna Sea have been "all along legal and legitimate," and the Chinese coast guards accompanying them are only carrying out their duties.

"I want to stress that China's position and propositions comply with the international law, including Unclos," Geng told a news conference in Beijing last week. "So whether the Indonesian side accepts it or not, nothing will change the objective fact that China has rights and interests over the relevant waters." 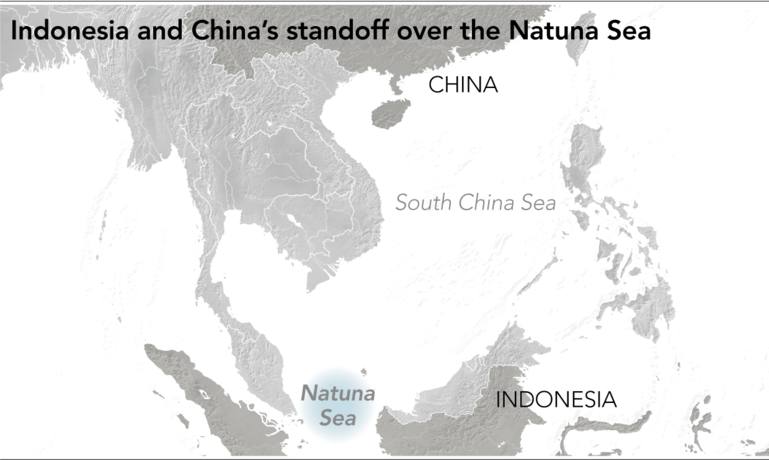 But Widodo's government is far from united on the standoff, especially as Indonesia attempts to tread carefully on the issue as it continues to court Chinese investment.

Defense Minister Prabowo Subianto and chief maritime minister, Luhut Pandjaitan, have been criticized by the public on social media for playing down the issue.

Pandjaitan, who oversees investment matters and is seen as Beijing-friendly, last week said there is "no need to blow up" the Natuna dispute, and that it is Indonesia's fault for not installing enough patrols in the waters. After the cabinet meeting on Monday, he said the EEZ is an economic matter, which is separate from the issue of sovereignty.

Meanwhile Subianto, who visited Beijing last month, surprised many by saying China is a "good friend." His remarks contradict his intense anti-China rhetoric while running against Widodo in April's presidential election.

Many Indonesians have lamented Widodo's decision to replace Pudjiastuti, who was popular for her aggressive hunt on poachers, which have lurked in Indonesian waters for decades, causing trillions of rupiah in annual losses.

The new fisheries minister, a politician from Subianto's Gerindra Party, is seen as more docile and has been blamed for reduced patrols and allowing illegal fishing vessels to return to Indonesian waters.

The Jakarta-Beijing dispute over the Natuna Sea goes back to March 2016 when Chinese coast guards attacked an Indonesian patrol vessel for illegal fishing following an Indonesia interception of a Chinese-flagged fishing boats in the area. In 2017, Indonesia angered Beijing by renaming waters north of Natuna Islands the North Natuna Sea. And in December 2018, Indonesia established a new military base on the islands.