SYDNEY -- Commodity price trends, China's energy crisis and evolving Asia-Pacific defense alliances appear to be helping Australia weather its long-running confrontation with Beijing, despite significant pressure on some segments of its economy.

Nearly 18 months after Prime Minister Scott Morrison's call for an international inquiry into the origins of COVID-19 soured relations with Beijing, analysts say Australia looks to have suffered only a limited economic hit from Chinese trade sanctions and other pressure. Australia has even managed to widen its trade surplus with its biggest partner to record levels over the past year, while finding new markets for many of its affected sectors.

Australia has also become a pillar of the increasingly prominent U.S.-aligned Quadrilateral Security Dialogue (Quad) alliance. And last month it secured the trilateral AUKUS partnership with the U.K. and U.S., which will deliver significant military benefits including nuclear submarines.

Morrison's critics accuse him of undermining crucial trade ties and needlessly riling China. But some experts argue Australia's ability to hold its own against a rising superpower -- coupled with some luck -- may have also exposed the limitations of China's strategy, at least for now.

"It's been very fortunate for Australia because the blunt edge of the trade sanctions has really been moderated by the sky-high commodity prices, especially iron ore," said Peter Cai, a research fellow at the Lowy Institute, an Australian foreign policy think tank. China's appetite for minerals to boost its recovery from the pandemic has worked at cross purposes with its geopolitical objectives. It had to pay through the nose as iron ore -- Australia's top export -- soared above $200 a ton for most of the first half of this year. Iron ore has since fallen sharply, but coal has been surging.

An unofficial embargo on coal imports from Australia was meant to be the biggest and most visible demonstration of Beijing's displeasure. For more than a year, dozens of ships carrying Australian coal have been left stranded outside Chinese ports, as the world's No. 2 economy tried to scuttle trade in a sector that was the third-biggest export earner for Canberra.

Instead, the restrictions helped set in motion a disruption in the global supply chain for the commodity, and rising demand from China's electricity sector has resulted in prices for benchmark high-quality Australian coal touching a record $230 a ton this month.

China this month allowed a small number of Australian coal cargoes to unload, in a grating reversal. Analysts now believe Beijing will temporarily ease the ban on thermal coal shipments as the nation faces a major electricity crunch.

"As the country grapples with one of the most gripping power crises in the last two decades, there are signs that China could be softening its stance on stranded Australian coal," Rory Simington, principal analyst at consultancy WoodMackenzie, said in a note.

Based on accounts from importers, WoodMackenzie expects 3 million tons of Australian thermal coal and 5 million tons of metallurgical coal to be cleared into China's domestic market. 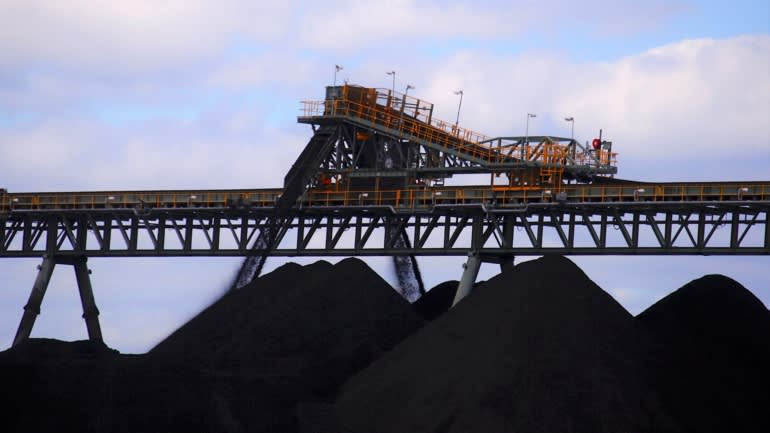 Coal mining in New South Wales: China has imposed an unofficial ban on Australian coal but may be easing up due to its energy crisis.   © Reuters

To be sure, volatile commodities prices could turn against Australia. Parts of the economy have been heavily impacted by China's sanctions as well. Trade in agricultural commodities -- worth an annual 13 billion Australian dollars ($9.5 billion) -- has suffered the biggest collateral damage.

Andrew Weidemann, a farmer in the state of Victoria and a director at industry body Grain Producers Australia, estimates the barley sector lost up to AU$700 million after China slapped an 80% tariff on Australian produce last year.

But while the price premium available from China may have disappeared, the industry has been able to find new markets such as Saudi Arabia. Prices could still take off this year, Weidemann said, amid looming drought in some countries and a shift in global supplies.

"Australia has been able to find other export markets for a lot of groups that have been sanctioned, thanks to the open multilateral trading system," said Shiro Armstrong, an associate professor at the Australian National University. "But the Chinese have done themselves a lot of reputational damage in the way they have quite transparently tried to coerce Australia with economic sanctions."

Analysts say the China-Australia spat is being watched carefully in a lot of capitals across the world, with China's actions fueling widespread anxiety due to its status as the largest trading partner for many countries. At least some may take away the lesson that it is better to diversify, become less reliant on China and draw closer to the U.S. arc of influence.

That is exactly what Australia has done.

"One of the more profound consequences of China's trade sanctions has been that there is no longer any ambiguity about where Australia stands," the Lowy Institute's Cai said.

"Even until two years ago, we kept hearing that tortured formula from the Australian government: 'an ally of Washington and a friend of Beijing.' You're not going to hear that anymore." The drift toward America led to the AUKUS gambit last month, which Prime Minister Morrison labeled "the single greatest initiative" to achieve Australia's national security interests since the 70-year old ANZUS pact with New Zealand and the U.S.

Meanwhile, the country's Quad alliance with the U.S., Japan and India is also being positioned as an Asia-Pacific bulwark to counter a rising China, indicating a fundamental shift and commitment to a U.S.-led coalition.

China has criticized both partnerships, with a Foreign Ministry spokesman saying on Oct. 8: "The U.S. Indo-Pacific strategy, AUKUS and Quad are all closed and exclusive cliques informed by the Cold War zero-sum mentality with strong military security undertones. They will spur [a] regional arms race, aggravate tension, and undermine regional unity and cooperation."

Showing no signs of backing down, China's Global Times state mouthpiece railed against Australia in several articles published after former Prime Minister Tony Abbott's recent visit to Taiwan. "The current trade frictions between China and Australia are derived from Australia's hostility toward China," one read.

"Australia has been wreaking horrific havoc to the China-Australia relations in the recent several years," read another opinion piece. "In the event that Canberra should take further concrete actions to violate the bottom line of China's national interest, the bilateral relations could face cataclysmic upheaval."

Cai, however, observed that "the Australian government has made it quite clear that they are willing to risk their very profitable trade relationship."

"So from the lens of the bilateral relationship," he said, "it has been a bad outcome for China."